Paul Wells: 'The premier, like most of us in our due time, has decided sorrowful knowledge is more compelling than glib ignorance, and that the only way to deny purchase to an infectious disease is to give it fewer chances to infect.' 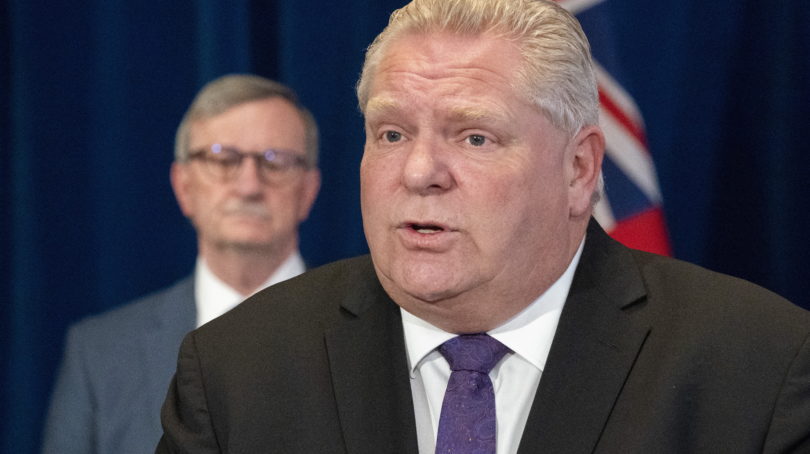 “Sorrow is knowledge,” Lord Byron told us long ago. “They who know the most/ Must mourn the deepest o’er the fatal truth/ The Tree of Knowledge is not that of Life.”

Doug Ford, no classicist, had a similar message for Ontarians on Friday as he finally broke a short-lived taboo whose justification none of us will remember in a week: the odd belief of several Canadian governments that their projections of possible death tolls from the Coronavirus must be kept from the public.

“These numbers are stark and they are sobering. They tell a story,” Ford told reporters at Queen’s Park. It’s a story of near-certain death on a scale beyond the experience of any living Ontarian. It’s also a story each of us is writing with our lives and our comportment.

It was a startling admission from a premier who had run for office, in no small measure, on promises to make picnics in parks and cold ones with buddies easier to get in Ontario. But the premier, like most of us in our due time, has decided sorrowful knowledge is more compelling than glib ignorance, and that the only way to deny purchase to an infectious disease is to give it fewer chances to infect.

The pandemic runs its course once it’s set in, and with 3,255 confirmed cases and 67 dead already, it seems sure to reap many more, bureaucratic and academic experts had told reporters before Ford spoke. Some 1,600 people in the province seem likely to die by the end of the month, between 3,000 and 15,000 before this quietly implacable beastie runs its course next year or the year after. And that’s if everyone keeps doing what they’ve done so far, sheltering in place, coughing into elbows, washing hands as if expiating sin with the diligent application of soap and toil.

If even more Ontarians do even more of these things, that number might be reduced, Dr. Peter Donnelly, president and CEO of Public Health Ontario, said before the premier spoke. Drop our guard, and the scale of slaughter spirals higher. If we’d done nothing, the public-health experts’ curves suggest 100,000 would have died. The delta between 3,000 and 100,0000 dead is the difference between diligence and laxity.

“We need to bear down,” Donnelly said. “There is no dilemma between saving lives and saving the economy. Bearing down hard now achieves both things.”

Construction sites will be inspected for safe work habits. “We’ve shut down five construction sites and we will not hesitate to shut down more.” The police will keep a watch on social distancing in public places over another sunny weekend. “Last weekend was just unacceptable.”

None of us began this year believing it would be about containing slaughter on this scale. Three thousand deaths would be two and a half times as many as die in a normal seasonal flu season, twice the number who died of apparent opioid overdoses in 2018, at the height of what I used to call the worst public-health crisis of my lifetime. The bigger numbers, 15,000 or higher, are not far short of the toll the Spanish flu took a century ago.

The scale of the grief around and ahead is such that perhaps the day’s biggest surprise is how unsurprising it all was. We’re in deep, we will be for a while, we will not all escape. The cost is brutal. There are serious questions to be asked, later, about how we got here. Donnelly, a dour Scot from Edinburgh and Stirling by way of Central Casting, had no good answer to repeated questions about why Ontario has done less coronavirus testing per capita than any other Canadian jurisdiction. Ford was telling people to take their March Break vacations very late in the game.

But we seek progress, not perfection, and surely it is progress for public office holders to decide they do not deserve to know more about the uncertain path ahead than we do. Quebec’s premier François Legault has already said he’ll release comparable data for his province on Tuesday. Others will follow suit. Soon we will know what we already knew: This is bad, it will be worse, it could be much worse still, and the cost of moving the needle will be high. Sorrow and knowledge are our lot.