Iowa, Wolf Blitzer, and the end of America 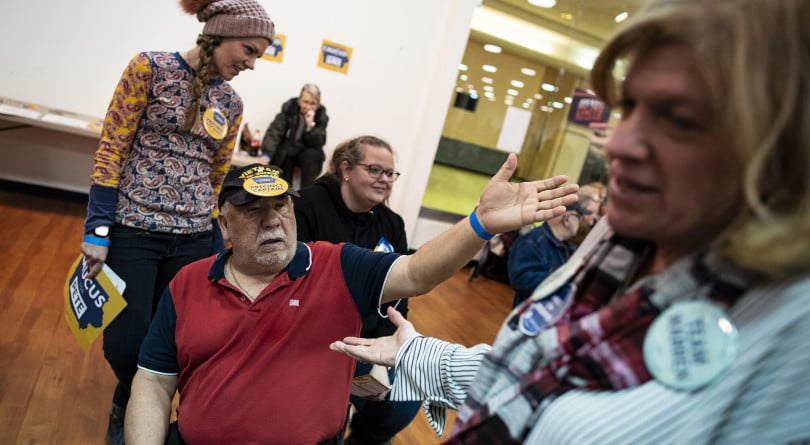 A supporter of Pete Buttigieg speaks with a supporter of Elizabeth Warren during the Iowa caucus at the Southridge Mall in Des Moines, Iowa, on Feb. 3, 2020. (Al Drago/Bloomberg/Getty Images)

I gave up on America at 11:10 p.m. The moment that broke me, as you would expect, was delivered by CNN’s Wolf Blitzer. As the world waited for the results of the Iowa caucuses, and as news anchors became increasingly agitated at the delays, Wolf somehow managed to make contact with a precinct secretary in Story County. The man was desperately trying to report the results of his poll and the Democratic Party headquarters had kept him on hold for over an hour. Live, on the air, as Wolf was interviewing the man, HQ finally took his call.

I won’t lie. It was a riveting moment of journalism. American democracy—in action. The archaic messiness of it all being resolved live on TV as we all watched breathless. Then, before the precinct secretary could report his numbers, HQ hung up. The line went dead. Confused, the man then hung up on Wolf, who then stared into the cameras with a look of flustered despair that should define our age.

America is the world’s oldest democracy, and it is very much showing its age. I won’t try to summarize the entire esoteric and complicated process that the most powerful nation on earth uses to select its leader. That would require hundreds of pages, diagrams and a general feeling of defeated bewilderment. Instead, I will just try to explain Iowa.

For two years in advance of the nomination race, the candidates’ campaign teams sets up satellite offices across one of the most sparsely populated states in the union. They go door to door, trying to extoll the virtues of their candidate, and in many cases openly bribing potential voters with offers of free snow-shovelling or dental exams (note: I’m not making that up).

READ MORE: America in 2020: King George gets his revenge

Then, everyone gathers at dozens of locations ranging from school gyms to living rooms and physically group themselves according to which candidate they prefer. If, at any given location, one candidate does not muster 15 per cent of the gathered caucus-goers, their supporters must then walk over to join another group, or leave.

These results are then collected at a central headquarters and confirmed and tabulated so Iowa’s delegates can be divided among the candidates accordingly. Unless, of course, you can’t give your results to headquarters because they hung up on you. Or, because a custom-made reporting app didn’t work. Or because the internet was down. Or because precinct secretaries didn’t understand how any of it worked. The morning after it is still not clear what went wrong.

Regardless, like in those remote English villages where every May Day they take one unsuspecting tourist, place them in a wicker man and then burn them to ensure a bountiful crop, the Iowa caucuses may have made perfect sense at one time in the past, but no longer.

The entire process is so obviously undemocratic and fraught with confusion it’s incredible a 21st-century self-declared democracy would rely on it to even elect a dog catcher. There are no absentee or secret ballots. If you are disabled or otherwise indisposed, you can’t vote. Rural areas get more delegates than cities. And the voting demographic is wildly different than the rest of America.

The United Nations has deployed election monitoring missions to better organized countries. If this is harbinger for the year ahead, we need to brace ourselves for utter chaos. We were worried that the Russians might meddle in the election, when we should have been more concerned that the Americans would get involved.

It is easy to laugh at the confusion, but the implications for Canada are serious. We cannot afford to have a failed democracy on our southern border. Imagine the difficulties this would create for families looking for some Florida sunshine on March break. I would propose we need to immediately petition the UN for a Chapter 6 peacekeeping mission that would include stability operations, the organization and monitoring of elections, and some capacity building. We will be greeted as liberators. And Wolf really can’t take much more of this.