Is Donald Trump a fascist?

David Moscrop: For now, we can say that Donald Trump is enough of a fascist to raise serious concerns warranting a significant and coordinated response from inside and outside of U.S. 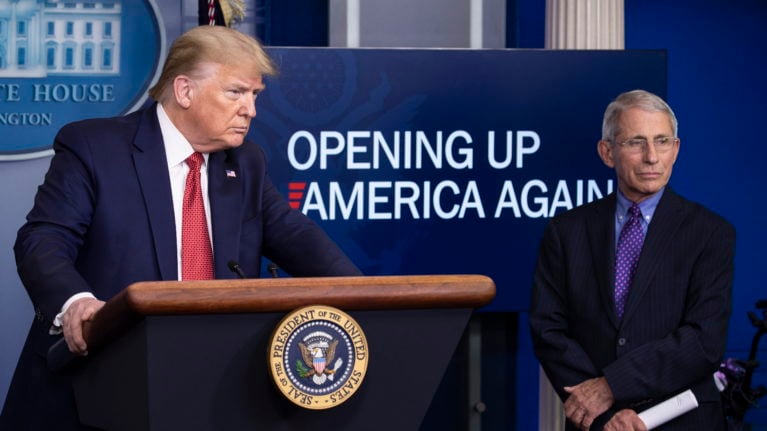 In this Apr. 16, 2020 President Donald Trump speaks about the coronavirus in the James Brady Press Briefing Room of the White House in Washington. (Alex Brandon/AP/CP)

Since Donald Trump was elected president in 2016, the United States and the world have had to confront questions that have nipped at America for decades, though rarely so aggressively. Could the country go authoritarian? Could it go fascist? The COVID-19 pandemic has seized our attention, but rather than distracting from these questions, it has thrown them further into the spotlight.

In early 2017, I argued that Trump had invited authoritarianism to America. That argument holds up. Indeed, it’s more clear now compared to three years ago that the 45th president of the United States is an authoritarian. But what of American fascism?

Yale philosopher Jason Stanley, author of How Fascism Works: The Politics of Us and Them, which is out later this month in paperback, says fascism is  “a method of politics. It’s a rhetoric, a way of running for power. Of course, that’s connected to fascist ideology,” he writes. “Because fascist ideology centres on power. But I really see fascism as a technique to gain power.”

Stanley centres fascism on power rather than belief and more specifically, techniques for winning power and keeping it. Those techniques are varied, but they include, as Stanley suggests, creating a narrative of victimhood and loss, undermining truth, peddling in extreme nationalism, and reaching back to a “glorious past.” Stanley argues Trump “practices fascist politics,” though this doesn’t imply the American government or state is fascist.

In a 2016 piece for the Washington Post, Georgetown University professor John McNeill wrote that there is “a pretty solid agreement” on what fascism is and that Trump can be measured on the “fascist metre”⁠—from “zero to four ‘Benitos’.”

“In the fascist derby, Trump is a loser,” McNeill eventually concludes, because he falls “far short of the genuinely murderous violence endorsed and unleashed by authentic fascists. He is semi-fascist: more fascist than any successful American politician yet…but…an amateurish imitation of the real thing.”

That was years ago. Has the pandemic changed anything?

In April, protesters took to the streets and state legislatures to protest state lockdowns. In Michigan, these actions were carried out under the banner of “operation gridlock.” Many of the groups identified as pro-Trump. On Apr. 30, armed protestors tried to get onto the floor of the Michigan state legislature, while others took to the gallery above. Does anyone doubt that at this point Trump commands—intentionally or otherwise—gangs of protestors and militias? In another era, we might have called them Brown Shirts.

The Trump administration bungled its pandemic response and has been trying to focus attention on the Chinese regime⁠—far from blameless itself, with its incompetence, oppression and duplicity⁠—ever since. Trump’s government is now pushing a conspiracy theory that the virus came from a Chinese lab, with Secretary of State Mike Pompeo leading the charge. (It’s not clear whether Pompeo meant that the virus was engineered.) This is a theory circulated by right-wing commentators, the sort who underwrite Trump’s authoritarian, nationalist narratives. Trump’s impulse to create and identify an enemy—more than a rival—and to try to rally the country against it, is theatrical, dangerous and typical of a fascist.

While the Trump administration has fought with China before, accusing it of plunging the world into a pandemic that has infected millions and killed nearly 250,000 people so far, including almost 70,000 in the United States alone, is extraordinary. It forms the backdrop of a 2020 re-election campaign that is “set to fall back on xenophobia,” writes The Guardian’s David Smith.

During the pandemic, Trump has ramped up his attacks on the press. Last month, the Committee to Protect Journalists released a report claiming Trump has “dangerously undermined truth and consensus in a deeply divided country.” That report is based on incidents and a pattern established long before the coronavirus shook the world. But in the last few months, Trump has claimed “total authority” during a briefing, attacked and belittled journalists, speculated about dangerous and absurd treatments for COVID-19, and played a campaign video (propaganda) in front of assembled reporters. This warrants at least four Benitos.

Is Donald Trump a fascist? In the long run, scholars, pundits and others will debate that question and probably reach some sort of consensus. For now, we can at least say he’s enough of a fascist to raise serious concerns (especially during a time of global crisis) warranting a significant and coordinated response from inside and outside of the country’s borders.

Still, the American state itself may not be fascist, even if Trump is, but its decline set against a history of slavery, racism, xenophobia and violence at home and abroad suggests that there is a potential it turns that way. Or perhaps in some other odious and dangerous way, the state may mutate into something we would not label fascist, but ought to worry about and resist nonetheless.

At the very least, the pandemic invites Trump to indulge in his worst impulses while Republicans and supporters enable him, the state remains limited in its capacity to curtail him, and his opponents alternate between fecklessness, uninspired and business-as-usual “resistance.”

While one may be inclined to argue that a global pandemic is no time to worry about these questions, the opposite is true: it’s more important to tackle them now than it has ever been.