Is the U.S. empire in jeopardy?

Sergio Marchi: It would be prudent for the Canadian government to weigh the continued decline of the U.S. as a real option—and what this would mean for our national and global interests 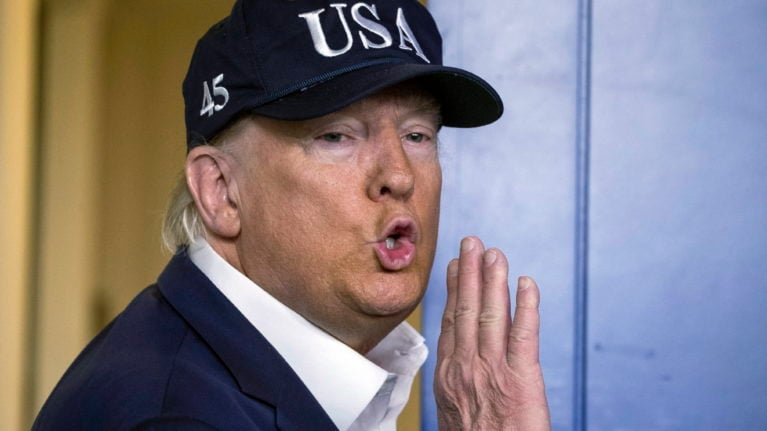 In this Mar. 14, 2020 photo, President Donald Trump talks after speaking during a news conference about the coronavirus in the James Brady Briefing Room at the White House in Washington. (Alex Brandon/AP/CP)

The U.S. has been an able leader of the free world for a long time, but it’s now looking tired and uncertain. Their politics is a mess, and their global leadership is in serious jeopardy. And that was before the coronavirus pandemic. If Trump is re-elected, there’s little hope for renewal, which has been a longstanding hallmark of American society. Indeed, with another four years under his rule, their political system would likely reach unthinkable new lows. Conversely, with a Democrat in the White House, can the situation be salvaged?

It’s therefore not an exaggeration, to ask if the U.S. empire is in jeopardy. It is entirely possible, if we look to history. The past is littered with empires that have come and gone. Reigns that seemed invincible were no more and futures were forever changed.

While predictions are for fools, I believe it would be prudent for the Canadian government to weigh the continued decline of the U.S. as a real option, and what this would mean for our national and global interests. Blaming Trump alone would be too simple. The gradual and unmistakable political, economic and social erosion started well before his administration.

In 2008, CNN’s Fareed Zakaria, wrote an enlightening book about  how developing countries were on the rise and challenging America. His book was entitled, The Post-American World, and the Rise of the Rest, and his premise was that America was not necessarily on the decline. Rather, it was more about the rapid ascension of other nations. In the intervening 12 years, however, it is painfully clear that America has been slipping quickly. One need only to consider some of the prevailing ailments.

Washington politics has become bitterly divided, more extreme and paralyzed on many fronts. The two parties are barely talking to each other. There was a time, when the two, despite their differences, would band together when the national interest was at stake. That is no longer the case, which weakens their ability to lead at home and abroad.

Money has badly corroded their political arena and restricted who can enter it. Without any serious limits, democracy is being “bought and paid for.” While Bernie Sanders passionately laments this, both parties have become beholden to the American dollar. In the 2012 election, for example, Obama and Romney each spent over a billion dollars, just trying to get elected. That’s an obscene amount, which fuels the alienation that average Americans feel. The belief that their government is no longer theirs.

MORE: The unbearable lightness of Donald Trump in a coronavirus crisis

The rule of law, which has traditionally been a pillar of their democracy, is now being severely undermined. Trump is acting with impunity, running roughshod over the law, as he moves to forgive friends and target his political enemies. Meanwhile, the Attorney General acts as if he is Trump’s personal lawyer. In addition, there is no line separating the president’s public interests from his private ones. The concept of conflict of interest is dead.

On the economic  front, we note that tariffs, sanctions, subsidies and other forms of protectionism, are being used to protect and prop up U.S. businesses. Not only is this unsustainable, but China is already breathing down their neck and poised to claim the number-one spot as global economic leader. Significant policy disputes and tensions—abortion, capital punishment, guns, immigration, same-sex marriages, race relations—continue to swirl without any satisfactory closure. They make appearances in every election.

Trump is also weakening international institutions. The U.S. has gone from being the locomotive in building and sustaining organizations for the global public good, into a caboose that drags and hinders progress. In the process, the president is undoing important relationships with allies, and weakening regional and global alliances. Many years in the making, these friends and groups share economic, political and military interests. Now, like Canada, they are victims to an “America-first” preoccupation.

MORE: Would Donald Trump ‘take responsibility’; No way, not on Oval Office Opposite Day

Just look at his handling of the COVID-19 crisis. Most objective observers have concluded that America has badly underperformed. The president was slow off the mark, quick to call it a “foreign” and “Chinese” disease, he played the blame game with Europe, and is in constant quarrel with U.S. governors. Collaboration and empathy was supplanted by a go-it-alone mentality.

Dr. Anthony Fauci, the U.S. infectious disease expert, now walks around with six security agents to protect him against threats he has received from Americans, who question his medical judgement and loyalty to the president. And Chinese Americans are now buying record amounts of guns for protection against a racial backlash, owing to the fact that the virus originated in China. These societal reactions are extreme and disturbing.

Finally, to make matters worse, Trump coddles political dictators that have no interest in a healthy Western society. In fact, they are working towards empire replacement.

In the face of these indisputable and concerning trends, where does this leave Canada moving forward? Many European countries are not waiting, they are already preparing their own contingency plans. Canada should do the same. Quietly but deliberately, our political leaders should evaluate this shift by asking tough questions, in an effort to develop strategically effective options should they be required.

They need to address at least four critical areas.

First is the need to carefully consider the potential economic consequences we would face, should America forfeit its leadership position and turn inward.

On trade, will we be able to sustain the world’s largest relationship, and a NAFTA deal that has just been updated? If not, then it will be critical to adjust our global trading strategy accordingly. We would also have to worry about the millions of jobs that are closely tied to a strong America, and the complementary multi-billion dollar stock of U.S. investments in our country.

In regards to our energy sector, which is already under severe strain, we must protect our energy exports by quickly diversifying and finding new markets. Selling oil and gas at greatly reduced prices exclusively to the U.S. was never a good idea. We will also need to expect and guard against a resurgence of “Buy America” campaigns, which are no more than thinly veiled, modern-day forms of protectionism.

Second, we must think hard about our unique bilateral security arrangements.

The U.S. defence arrangements with Canada are more extensive than with any other country. They are the big brother in this relationship, a huge concern for us. Trump has repeatedly complained that Canada does not pull its weight on defence. Should he act precipitously against us, he could make life difficult in the realm of Canadian security interests. He could also move on past threats to both NATO and NORAD, which would only further compound our difficulties.

Closer to home, it might also mean changes to the many customs and border enforcement agreements that we currently enjoy with the U.S., impeding the movement of some 400,000 citizens, from both countries, who cross the border each day.

Third, we would need to weigh the ramifications on our bilateral and global political agenda.

We have shared a strategic political friendship and agenda with the U.S. Yes, we are independently minded and see things very differently at times. But overall, we have been very tight with American policies. If a radically different American trajectory emerges, we will need to seek out new strategic relationships and alliances. As well, we will need to review our roles and support base when it comes to the many international organizations where Canada is a member, and where we have benefited from U.S. support—the UN, WTO, G-7, G-20, OECD, OAS and APEC.

In terms of North America, we have successfully built a strong continental framework with both the U.S. and Mexico. We will therefore need to consider its future course with the potential intransigence of its biggest partner. And we will find out if our relationships with other world powers, such as China and Russia, are made vulnerable without the guarantee of American backing.

Finally, we would need to account for how a changed America could undermine global leadership and progress on the social agenda.

For so long, we have been on the same page as the U.S. Together with other key allies, we have fought for a just and kinder world. This includes actions on human, labour and gender rights; efforts in building democracy, free speech and a free media; sound migration and refugee programs; environmental agreements; and the building of institutions that helped the world navigate the many rocky shoals. It will be crucial to find ways to continue to build on this record, rather than turning towards a harsher global community.

Then, there are issues like climate change, that fit no single category. They belong to each of the foregoing four issues because they pose such an existential threat to our planet.

America’s continued decline would represent a giant tectonic shift in the current world order. It will create huge and dangerous voids, that will require our urgent attention, just as other geo-political earthquakes did, including the implosion of the Soviet Union, the fall of the Berlin Wall, the expansion of NATO, the extension of the European community, the rise of China, 9-11, the 2008 financial crisis, Brexit, and now a global pandemic. More than any other nation, our close friendship and geographical proximity makes Canada particularly vulnerable.

If the old American way is salvaged, fine. We would continue to benefit from our long-standing relationship, and so would they. If not, we must make our strategic calculations, without being caught by surprise and without being restricted by sentimentality. To do nothing, and simply assume no change, would be an irresponsible risk to our continued political and economic prosperity as a nation.

Prime Minister Pierre Trudeau famously compared living next to the U.S. like living next to an elephant. “No matter how friendly and even-tempered is the beast, one is affected by every twitch and grunt,” he said. Well, what if the beast becomes unfriendly and unevenly tempered…then what?