It would be irresponsible if Ontario didn't postpone Toronto's municipal election

Opinion: For the sake of stability and an election driven by actual civic issues, Ontario needs to delay the voting for Toronto city council. Here's how 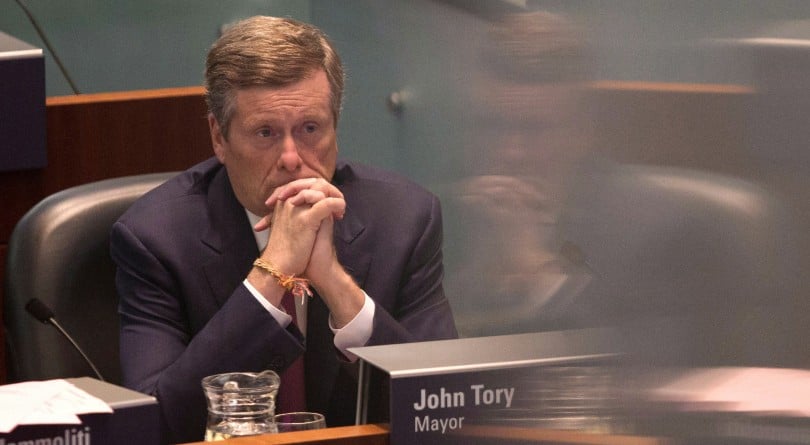 Angela Wright is a writer and political analyst. She previously worked as a political staffer at Queen’s Park and served as President of an Ontario PC riding association. She holds a master’s in history from the University of Iowa.

The political climate in Toronto right now can only be described by one word: chaos.

The city and its local elected officials have become embroiled in a fight with Ontario Premier Doug Ford and his PC government over the ideal number of councillors for the city. Most municipal councillors, including Toronto Mayor John Tory, want to increase council to 47 members, according to a consultation-driven electoral remapping, while the province wants to cut council to 25 members. But with a government appeal working its way through the courts, and the use of the notwithstanding clause causing fights between government and opposition at Queen’s Park, each side has become righteous in its rage and refuses to back down—all while the legislated election date for all of Ontario’s municipal elections, the fourth Monday of October, looms just weeks away.

Meanwhile, Toronto’s city clerk Ulli S. Watkiss, who’s responsible for administering Toronto’s municipal election, told Toronto city councillors during an emergency meeting on Thursday that it would be “virtually impossible” to run a fair and accessible election at this point. She also stated that she has retained legal counsel to look into potential options to delay the election. This means the PC government could be facing another potential legal battle with Toronto’s city clerk if they continue to go forward with the pre-scheduled election date of Oct. 22.

The only responsible thing left for Ford’s PC government to do is postpone Toronto’s election.

That would require a change in the law, but that can be drafted relatively quickly. To implement this change, the government would draft a new bill amending the Municipal Elections Act, 1996 that would exempt Toronto from the election date of the fourth Monday of October and then subsequently set another fixed date, ideally early in the new year, to give the city enough time to readjust and prepare for changes to ward boundaries. And since the Ontario legislature is already in session, this new legislation could be introduced and voted on before the end of September.

Alternatively, the government could pull Bill 31, Efficient Local Government Act, 2018 (the new 25-ward bill that includes the use of the notwithstanding clause), amend it with these changes, and reintroduce it. The latter option, however, would likely be met with significant opposition because it maintains specific language for a 25-ward configuration.

Given the city clerk’s admission, Doug Ford’s PC government may find substantially less opposition to postponing the election. The NDP—who constantly declare the importance of accessibility—would look hypocritical for opposing legislation meant to ensure the Toronto election remains within reach of the city’s low-income, disabled, and working people, who typically face the greatest barriers to voting. Both the Liberals and the lone Green MPP Mike Schreiner have expressed their opposition to a smaller Toronto city council, though neither has been quite as vocal and disruptive as the NDP; a majority of the opposition caucus was removed from the legislature by the Speaker on Wednesday for failing to stop banging on their desks when Minister of Municipal Affairs Steve Clark introduced Bill 31. The NDP has also announced it will challenge the bill under Standing Order 52, which does not allow the introduction of a bill that is substantially the same as another one in one legislative session.

Aside from ensuring the election remains fair and accessible, postponing the Toronto election will also benefit all those currently running for office. City council and school board trustee candidates need more time to prepare and effectively run their campaigns. Cutting council to 25 members increases the average ward size by approximately 40,000 residents, and candidates need time to research the issues that are important to these new residents and visit them to explain their candidate platforms. Even with a large team of volunteers, visiting an additional 40,000 residents will take many months.

Many sitting city councillors, in a display of displeasure with the provincial government’s decision, have also withheld their nomination papers until the situation has been settled, which has eliminated a number of councillors from the race for the abruptly slashed council. While Bill 31 provides an additional two days for candidates to submit their nomination papers, they will still face the same crunch as those candidates whose papers have already been submitted.

Perhaps the biggest hindrance to an effective municipal election and a consequence of the ongoing fight between the city councillors—who just voted 29-7 on Thursday to ask the federal government to intervene to stop the province from using the notwithstanding clause—has been the complete absence of any discussion on issues that fall under the jurisdiction of the city.

Postponing the election until the new year will give the city a necessary reset on the election to shift the focus back to the municipal issues which, until recently, were of major concern to the city’s residents. There’s the issue of how 200 extra police officers were sent to patrol high-crime neighbourhoods from the hours of 7 p.m. to 3 a.m. but had a negligible impact on the city’s rising gun violence. There’s the issue of a ballooning affordable housing crisis that is forcing seniors from their homes due to inadequate government funding. There’s the issue of soaring pedestrian and cyclist fatalities, despite the city’s Vision Zero Plan implemented in 2016. And there’s an inefficient public transit network that can cause minor maintenance problems to spiral into to hours-long delays, while a transit plan to reach Scarborough in Toronto’s far east end still unresolved.

The role of Toronto’s city councillors is to deliver services to the city’s more than 2.7 million residents. But over the past few weeks, they’ve instead been focused on fighting Doug Ford. Jennifer Keesmaat, a latecomer to the city’s mayoralty race and Tory’s main competitor, has made the concept of the incumbent being not anti-Ford enough central to her campaign. However, it’s not the mayor’s job or city councillors’ jobs to hold the provincial government to account: That job belongs to the Official Opposition NDP and the MPPs in the Liberal and Green caucuses. Postponing the election will make the decision over the number of city wards seem less pressing and allow municipal candidates to return their focus to issues that actually fall under their purview.

But perhaps most importantly is stability. Electoral systems across the country are designed to return strong majority governments, which are intended to give Canadians a level of certainty and stability throughout a political mandate with predictable election dates. The current situation in Toronto, however, is anything but stable or predictable. Legally speaking, Toronto’s next election will have 47 wards. But when the government’s Bill 31 is passed—on a date still yet to be determined—the number of wards will drop to 25.

What happens in the event the Ontario government loses its appeal? If the 25 city councillors have already been elected, it would cast a cloud of illegitimacy on Toronto city council itself. And, as Liberal MPP Nathalie Des Rosiers told the Ontario legislative assembly on Thursday, it would put the provincial government in a position where it would have to pass more statutes to validate city council’s decisions. Postponing the election would protect the provincial government from such a disaster, give the government further time to decide whether or not to pursue the case to the Supreme Court of Canada, and give its constituents the stability they expect.

Regardless of whether the number of wards and city councillors in Toronto ends up being 47 or 25, Torontonians, like the remaining 10 million residents of Ontario, deserve a strong and stable democracy. This means a fixed election date with a pre-determined list of candidates who have all had the opportunity to explain their position on relevant municipal issues. The possibility for that grows grimmer with each passing day—and postponing Toronto’s election is the only responsible solution, if not duty, for a stable provincial government.