Andrew MacDougall: Until everyone involved in the scandal testifies—not just Gerry Butts—this looks like a cover-up, not a transparent process 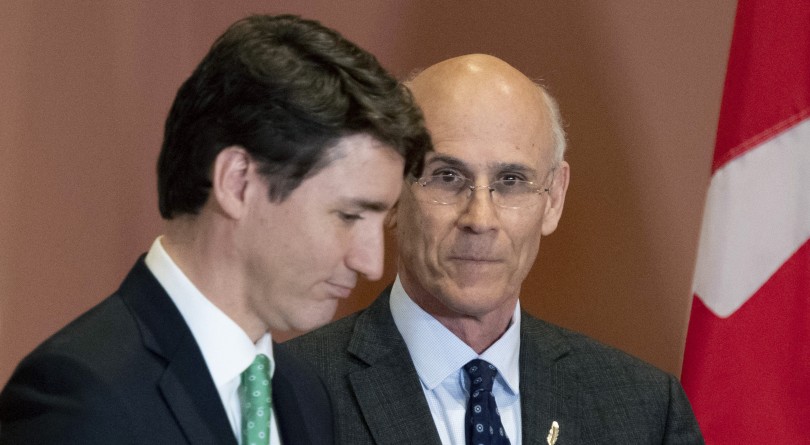 Trudeau walks past clerk of the privy council Michael Wernick during a cabinet shuffle at Rideau Hall in Ottawa on Friday, March 1, 2019. (THE CANADIAN PRESS/Justin Tang)

It’s another day, and another defence for the Liberals on SNC-Lavalin.

For those of you who are algorithmically shielded from bad Liberal news, we’ve now moved from “false” after the story broke weeks ago to “yeah, well, you might think 11 people having multiple meetings or phone calls with the non-partisan attorney general or her staff over four months is pressure” after Jody Wilson-Raybould’s testimony.

Struggling to draw a line—any line—under the controversy, Trudeau and the Liberals are now pushing respect for the ethics commissioner and the House of Commons standing committee on justice and human rights like it’s a new religion.

(As an aside: imagine how poorly things have to be going to point to an office that has already found you guilty of breaking the law once, over the Aga Khan vacation.)

Only they’re not letting anyone preach.

Will the justice committee be hearing from Trudeau? No. How about Katie Telford? No. Bill Morneau? No. Ben Chin? No. Mathieu Bouchard? No. Elder Marques? No. Jessica Prince? No. Amy Archer? Sadly, she’s a ‘no,’ too.

You’ll note the above list doesn’t include Gerry Butts, the Prime Minister’s (former?) right-hand man, who yesterday tweeted out a letter to justice committee chair Anthony Housefather requesting an appearance. Butts will now appear on March 6, pending the sorting of some legal advice.

But why does Butts—who people jokingly (?) call Prime Minister Butts—get to appear, but not any of the other people accused of inappropriate behaviour in Wilson-Raybould’s testimony? If you were trying to prove to Canadians you weren’t interested in getting at the truth, this would be a good way of doing it.

Not that questioning Butts is without value.

We still, for example, don’t know why Butts suddenly quit his post on Feb. 18. There didn’t appear to be anything lethal about his conduct in the public domain to that point. Indeed, his resignation letter went out of its way to admit no fault, although Wilson-Raybould’s testimony later contradicted his take. After being warned by Jessica Prince, Wilson-Raybould’s chief of staff, that his Dec. 18 intervention on SNC was “interference”, the former attorney general has Butts allegedly replying: “Jess, there is no solution here that doesn’t involve some interference.” Did he say that? And what does it mean (other than the obvious)?

Butts will surely rebut that point, but it would also be good to hear him on any conversations surrounding Wilson-Raybould’s meeting with Trudeau the day ahead of her resignation from cabinet (presuming he was there). This is increasingly looking like an area that MPs on the committee must explore.

From committee testimony and/or the media, we do know Wilson-Raybould was shuffled from Justice a few short weeks after her last conversations on SNC with Butts, Katie Telford and Michael Wernick, the clerk of the privy council, who is alleged to have told Wilson-Raybould, “I think [Trudeau] is gonna find a way to get it done one way or another. So, he is in that kinda mood and I wanted you to be aware of that.”

Well, getting rid of a recalcitrant attorney general is certainly a way to “get it done,” isn’t it?

And it doesn’t take much of a conspiracy theorist to equate the final Dec. 19 ‘no’ with the subsequent shuffle, as Wilson-Raybould herself did, despite Trudeau apparently telling her it had nothing to do with it.

That impression probably didn’t last long. Especially as Wilson-Raybould later found out, her deputy minister at Justice, Nathalie Drouin, had been told by Wernick to prepare her successor, David Lametti, for a conversation with Trudeau on SNC. Reporting now also confirms Lametti met with senior PMO staff at the January cabinet retreat to discuss SNC. It hardly sounds like the centre was happy with the status quo.

Was Wilson-Raybould, as veterans affairs minister, aware her oft-challenged decision on SNC was about to be revisited and reversed? Is that why the first Globe story appeared? Until Wilson-Raybould is granted permission to speak about that period of time, we won’t know. (But I suspect another exclusive might soon appear in the Globe and Mail should Trudeau choose to keep her under wraps.)

It’s simply not good enough for Trudeau to blather on about jobs and dismiss Wilson-Raybould’s “characterization” without rounding out the picture himself. It’s only a fraction of the story; she has played only the cards he’s allowed her to play.

It’s time for Trudeau to let everyone put their cards on the table.

The justice committee should begin by inviting everyone named in Wilson-Raybould’s testimony. And then they should invite the former attorney general back to speak freely about her time at veterans affairs and her resignation from that portfolio.

Until Trudeau does that, anything that comes out of his mouth is a PR exercise meant to obscure the truth.