It’s time for Liberals to learn a lesson

Andrew MacDougall: Another ethics investigation is hanging over the PM. At some point, the Liberals will realize they’re being led by a dead man walking. 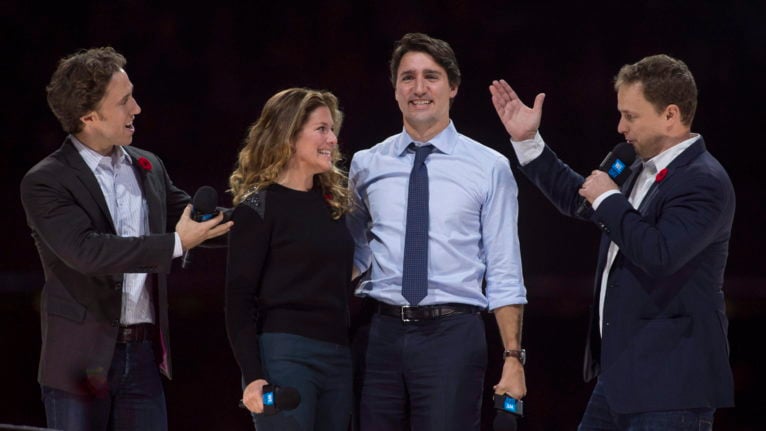 Craig and Marc Kielburger introduce Trudeau and his wife Sophie Gregoire-Trudeau as they appear at a WE event in Ottawa on Nov. 10, 2015 (CP/Adrian Wyld)

At some point, the Liberals will realize they’re being led by a dead man walking.

The moment might not come now, or even in a few days, but it will come, as surely as the Ethics Commissioner smackdown of Justin Trudeau for his flagrant conflict-of-interest in his government’s handling of a mega $912 million contract to the WE Charity, a group we now know has paid significant sums over the years to Trudeau’s mother, brother, and a smaller amount to his wife. Trudeau is going to be roasted, and deservingly so, by Mario Dion for not recusing himself from Cabinet’s WE (wee?) deliberations.

If there’s any doubt to Trudeau’s essential deadness, the Liberal caucus need only turn to the statement released by his office in response to the latest reporting on WE delivered yesterday by online outfit Canadaland, which is worth reproducing here in full:

“The Prime Minister’s relatives engage with a variety of organizations and support many personal causes on their own accord. What is important to remember here is that this is about a charity supporting students. The Canada Student Service Grant program is about giving young people opportunities to contribute to their communities, not about benefits to anyone else.”

If you’re looking for, you know, answers, don’t bother reading it again. The statement says absolutely nothing, and yet everything, at the same time. It is a zombie statement from a zombie leader. It’s amazing someone thought enough of it to hit send. They’re not even trying anymore.

One of the questions I get asked most often by people who are fascinated by the practice of politics is some version of “when do you know you’re really screwed?” Well, thanks to this PMO statement I now have a much shorter answer: “when you’re reduced to asking people to think about the children”. Then again, actually writing down “what is important to remember here” might actually be the better answer. It would have been better for Trudeau to tweet: “FAKE NEWS! ENEMIES OF THE PEOPLE.”

Not that it seems to be displeasing the flock of sheep in the Liberal caucus, none of whom seem particularly exercised by the fact their leader never seems to learn his lessons even though his entire M.O. is learning lessons based on his past bad behaviour. Trudeau has been caught red-handed on sexual harassment, black-faced on racism, and now thrice compromised on personal ethics violations and there is no clamour for him to go. If you think Republicans are servile enablers of Trump, you have no choice but to conclude the 150 or so MPs behind Justin Trudeau are no better. They are the problem too.

Because it will happen again unless they act. Trudeau almost lost his government to the SNC-Lavalin debacle and his response was to railroad nearly a billion dollars to his mate’s charity. Like Trump, Trudeau appears emboldened by his near-misses. Stephen Harper, on the other hand, recused himself from discussions about a potential Talisman Energy takeover in 2012 because his brother Grant worked for the firm as an accountant. Spot the difference?

Ottawa being Ottawa and Liberals being Liberals, there are undoubtedly whispered conversations being had amongst the Freelanders and Champagnists about what is to be done about Justin. But with trust in politicians now being somewhere near the toilet it is surely better to raise those principled objections in public, so that citizens see their elected officials can call out the garbage chucked out by their own side? Then again, Chrystia Freeland and François-Philippe Champagne are both in Cabinet and could have asked why the rush to service WE.

Compounding Liberal misery is the horrible coronavirus pandemic and the now $343 billion toll it has wreaked on the national balance sheet. There are the millions of jobs lost and millions of parents at their wits’ end trying to juggle work, schooling and childcare. Changing horses midstream is difficult at the best of times, let alone during a tsunami of bad news and difficult decisions. The hesitation to do so is at least understandable.

Here’s the thing though: what evidence is there that Trudeau is critical to any of the decisions being taken now to fight the pandemic? And what is the prospect of his headspace being clear enough to take difficult decisions with yet another ethics investigation hanging over him? And where Trudeau might have managed to snow Dion on his investigation into SNC-Lavalin by denying the right of witnesses to give their evidence, he won’t be able to do the same on WE, at least not to the same extent. Brand Trudeau is in for another direct hit.

And when Brand Trudeau is the entire bloody point of Justin Trudeau one has to wonder what the point would be in keeping the brand around if it’s so tarnished? By some point every asset becomes a liability. A good organization knows when it’s time to switch things up.