Jagmeet Singh calls MP 'racist,' but has he forgotten about Bill 21?

Tom Mulcair: Singh could use all of his credibility and personal experiences with racism to persuade Justin Trudeau to challenge Quebec's discriminatory Bill 21. That would be helpful. 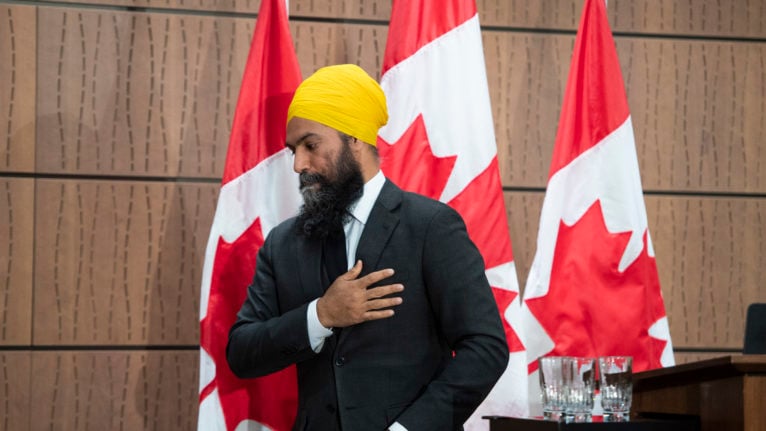 NDP Leader Jagmeet Singh leaves after participating in a news conference, after he was ordered removed from the House of Commons for calling another MP racist, on Parliament Hill in Ottawa, on Jun. 17, 2020. (Justin Tang/CP)

In 2016, when I first prepared a House of Commons motion condemning islamophobia, we couldn’t get it past a handful of Conservatives who’d denied unanimous consent. We worked hard for all-party agreement, drew a big chalk circle around the stain of Conservative opposition and were able to present the motion again. This time it was accepted and passed unanimously.

Those events in Parliament immediately came to mind when Jagmeet Singh chose to call Bloc House Leader Alain Thérrien a racist. Thérrien had communicated the Bloc’s refusal of unanimous consent for the introduction of Singh’s motion, which called for the recognition of systemic racism within the RCMP. Singh confirmed that he had indeed called Thérrien a racist, but refused to withdraw the word when asked to do so by the Speaker. The Speaker, Anthony Rota, proceeded to expel Singh for refusing to respect his decision.

In subsequent interviews, Singh affirmed that Thérrien had to be a racist because of the subject matter. He also said that he would not apologize for the personal insult, explaining that doing so would be like apologizing for being against systemic racism. As of Jun. 30, Bloc Leader Yves-Francois Blanchet was threatening a robust reaction when the House returns July 8, if Rota maintains the decision of expelling Singh for just one day. Blanchet went so far as to call Singh’s reaction “orchestrated.”

Rota has had to defend his credentials in his home riding of Nipissing—Timiskaming, after a local group called on the MP to demonstrate “stronger anti-racism leadership”. There is now little hope that the grave and urgent issue of systemic racism in the RCMP will ever be the object of the unanimous denunciation of the House of Commons.

In the case of that vote against Islamophobia, it had also been no small feat to get the Bloc Québécois onside. Beginning with my 2007 by-election for the NDP in Outremont, the Bloc rode anti-Muslim sentiment hard. I recall a thoughtful, soul-searching meeting with Alexa McDonough, Ed Broadbent, Jack Layton and our key organizers in the basement of our campaign headquarters where we struggled to find the right words to push back. In that particular by-election, the Bloc was decrying Muslim women’s right to vote with a face covering. We came out four square against the Bloc’s toxic position but personal name-calling wasn’t part of the game plan. We won handily and the Bloc lost two-thirds of it’s vote, finishing third.

In the 2015 general election, of course, the issue came to a head. My support for a woman’s right to wear a niqab at a citizenship ceremony cost us dearly. I remember my campaign director, who’d flown in from Ottawa, imploring me to change my position because it was causing a precipitous drop in Quebec that was playing into our national numbers. Many voters, she said, were just waiting to see whether the NDP or the Liberals, could defeat Harper to make their final choice. She was concerned it could cost us the election. A publication forthcoming in the prestigious Journal of Politics, has confirmed that the NDP got clobbered over the issue of niqabs in Quebec; it was pivotal in deciding the outcome of the election.

MORE: What the NDP is doing for Canadians

In France, even socialist governments have banned certain outward expressions of the Muslim faith. Other religions, such as Sikhism and Judaism have not been spared. Under the guise of separation of church and state, Muslim moms have even been denied the right to accompany their kids on school field trips, because of their headscarves. Outside every school in France is a poster explaining the rules against religious symbols.

Astonishingly, even the European Court of Human Rights has upheld the ban. Public French intellectuals like Michel Houellebecq and Élisabeth Badinter write openly about the threat religious symbols pose to French society.

For those of us who support Canada’s multicultural traditions, such views are an anathema. From our perspective, it’s easy to view them as racist, which I do. In Europe, they are widely shared and accepted as being part of public debate and have gained some currency here amongst those who find fault with multiculturalism.

When Quebec Premier François Legault is asked about systemic racism in Quebec, he too restates the question: “Ah, you’re saying all Quebecers are racist, and I’m saying some Quebecers are racist but that Quebecers are not systematically racist.” It’s a rhetorical trick where politicians repeat the issue in terms that suit their purpose while answering their own question.

Systemic racism doesn’t mean everyone is systematically racist. It means the dice are loaded against some members of our society because of their ethnic, religious or cultural origin. The result of that racism within the system can be proven by looking at results, measuring and comparing outcomes. Legault is too well-informed not to know that, but he also knows his base. Like the crafty populist politician he is, he’s talking to that base by saying, “I won’t let them call you a racist!”

Legault seems to have in part, at least, won his point. In the aftermath of the dispute between Singh and the Bloc a “premiers’ statement” issued by Justin Trudeau and all of the provincial premiers, on Jun. 26, talks several times of racism and discrimination but never uses the word “systemic”.

I made my first appearance in a parliamentary commission in Quebec City on the subject in the mid-80s and it’s an issue I’ve felt passionately about since. Government reports showed a huge, systemic under-representation of minorities in the Quebec civil service back then. We worked hard to change that. It began by making people understand the problem. The situation has indeed improved considerably, but just this month, the Quebec Human Rights Commission released a study showing that there are fewer than half the number of visible minorities in the Quebec civil service than their proportion of the overall population. Historically, this situation is also a reflection of another old divide: there was much discrimination against French-Canadians in the business sector in the past and good civil service jobs were seen as a way of levelling the economic playing field.

These issues are complex and Jagmeet Singh knows that. He has proven it in the past, notably when confronted by a voter who told him to remove his turban in order to “look more Canadian”. Singh was almost spiritual in his calm reaction. He knew he was dealing with someone who just didn’t get it and it became a teachable moment. Many people called that man a racist, but Singh never did.

Right now Québec has a law on the books, Bill 21, which openly discriminates against religious minorities, in particular against observant Muslims, Sikhs and Jews. Thus far, no opposition party in Parliament, including the NDP, has dared challenge that law for what it is. They all, including Mr. Singh, say Quebec has a right to adopt it. Trudeau is still refusing to refer the case to the Supreme Court and instead, the victims of Bill 21 who  are being denied the right to teach, become cops or government lawyers, will have to fight for years as the issue slowly wends its way through the courts.

Singh could choose to use all of his credibility and deep personal experience with this issue to persuade Trudeau to finally do the right thing and challenge the discriminatory Bill 21 immediately by referring it without delay to the Supreme Court. That would be helpful.