Max Fawcett: Alberta's energy sector should highlight the weaknesses in other market-oriented oil and gas regions like Texas, where gas flaring and water management are more lax 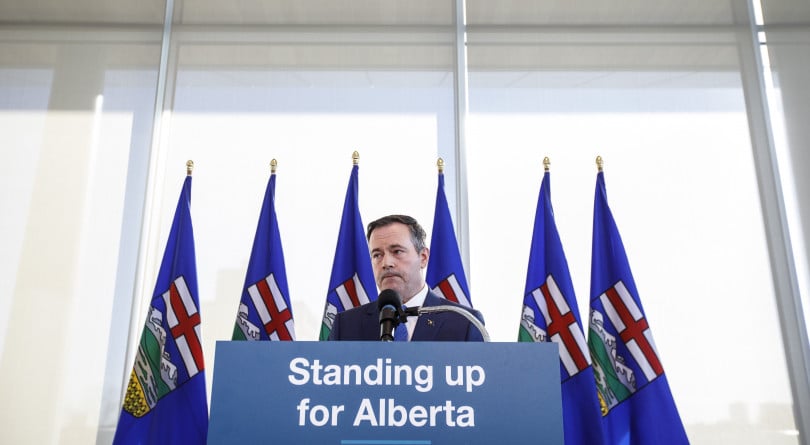 Alberta Premier Jason Kenney comments on the Teck mine decision in Edmonton on Feb. 24, 2020. (Jason Franson/CP)

For someone who seems to thrive on conflict, the decision by Teck Resources to pull the plug on its Frontier oil sands project must surely be tempting for Jason Kenney. He has a veritable smorgasbord of potential targets to lash out at, from Justin Trudeau and the federal government to his predecessor in Alberta and anti-pipeline protesters across the country. But Frontier, an oil sands mine that required oil prices substantially higher than where they are today in order to deliver an acceptable return, is yesterday’s battle — both literally and figuratively. If Kenney really wants a fight, he should be preparing for the one that actually presents a threat to Alberta: the divestment movement.

That movement, which seeks to pressure fund managers to reduce or eliminate their holdings of fossil fuel companies, looks more formidable by the day. Last week, Georgetown University (not exactly a bastion of woke liberalism), announced a new policy that will see it sell off its shares of publicly-traded oil and gas companies within the next five years, and divest from its existing private investments over the next decade.

Yale and Harvard may be next, given that students there continue to ramp up efforts (including interrupting the annual football game between the two schools in November) to pressure their administrations into joining the divestment push. All told, more than 1,000 institutions around the world, representing billions of dollars in capital, have committed to winding down their holdings of fossil fuel companies.

MORE: On the Teck Frontier mine: stumbling in the shifting sands

Even CNBC’s Jim Cramer has decided to join the party. Yes, he’s been wrong about a lot of things over the course of his career (including his infamous advice back in March 2008 that Bear Stearns stock was “fine” — five days before it collapsed into the waiting arms of Morgan Stanley at a 97 per cent discount to where it had been trading a week earlier), but his recent and repeated calls to sell energy stocks aren’t going to help. “You’re seeing divestiture by a lot of different funds,” he said on his Feb. 3 show. “It’s going to be a parade.”

That’s why business as usual is no longer an option. As AIMCo CEO Kevin Uebelein said during a recent meeting of the Alberta Heritage Savings Trust Fund’s standing committee, “I don’t think anything in ESG [environmental, social and governance also known as sustainable investing] is a fad. I think these are enduring risk factors that long-term investors should be taking into account.” He’s not the only one, either. Mark Carney, the former Governor of the Bank of Canada, is leading a push that would have financial institutions and banks increase disclosure of the carbon intensity of their investments, and he’s warned that up to half of developed oil reserves in the world would need to be stranded in order to avoid the worst impacts of climate change.

Rather than trying to reject the logic of divestment, or dismiss the mounting concerns that inform it, Alberta’s energy sector needs to redirect it towards more appropriate targets. This doesn’t mean drawing attention to regimes like Iran and Saudi Arabia, which is a common reflex in many parts of the oil and gas industry in Canada. After all, pension funds, post-secondary endowments, and other large pools of institutional capital in the west don’t (and often can’t) invest much there.

MORE: The real betrayal of Albertans? Lifer politicians who won’t tell them the truth.

Instead, Alberta’s energy sector needs to highlight the environmental weaknesses in other market-oriented oil and gas regions. Most notably Texas, where regulations around gas flaring and water management are far more lax than in Alberta. Most importantly, they need to remind investors that they have a carbon tax in place, something that doesn’t exist in the United States. By divesting from Alberta’s oil and gas companies, investors would effectively be punishing a region that has embraced a pro-climate policy—and rewarding ones that haven’t. Wouldn’t they rather use their capital to drive change instead of slowing it?

This is, as it happens, the approach that AIMCo prefers—something its CEO calls “voice over exit.” As Uebelein told Alberta legislators, “it means that we think we can make more influence on our investing companies and we can make more money on behalf of our clients by having dialogue with our investing companies about change, [as] opposed to hitting the exit doors and selling our stock or blackballing any issues or industries.” That’s the pitch that Alberta should be making to those looking to divest from its energy sector. Instead of hitting the exits, they should steer their capital to the companies making the biggest emissions reductions, and give them both the capacity and incentive to drive them down even further.

This is an approach that companies like Suncor and Cenovus, which have supported things like carbon taxes for longer than most people realize, should be particularly receptive towards. But if they’re going to really embrace it, they’ll need to create more distance between themselves and the industry organizations that ostensibly represent their interests and continue to oppose climate policy. They’ll need to invest more in their own brands, and position themselves more aggressively as the go-to choice for investors looking for lower-carbon energy exposure. And they’ll need to publicly acknowledge the fact that divestment is here to stay, even if some of their peers refuse to accept it.

Fighting back blindly, as the war room has shown time and time again, isn’t an effective strategy. But by practicing a bit of reputation judo, and directing the divestment movement’s growing strength towards a more appropriate target, the energy sector and its allies can find a way to survive. If nothing else, it’ll more effective than trying to fight battles that have already been lost.