A city’s success depends on its adaptability. The ones that reinvent themselves prevail, while the ones that resist change collapse. Look at Detroit, Mich., the city that served as a point of entry to the American dream during the industrial revolution. By 1920, it was the fourth-largest city in the United States, with a population of 990,000, peaking in 1950 with a population of 1.8 million, riding a wave of immigration fuelled by job opportunities in the automobile industry.

But city leaders made a critical mistake: they treated the economy as static, and did not anticipate change or adapt to diversify from manufacturing toward knowledge-based industries. The city lost nearly half of its population in the second half of the 20th century, and in 2013, it filed for bankruptcy. Success today in Detroit is still measured by taking things down, instead of building them up. Government documents proudly claim that “thousands of vacant homes have been removed at a more rapid pace than ever before in Detroit’s history”—as if this is a good thing.

This may seem too dramatic a cautionary tale for Canadian cities. After all, we dominate the Economic Intelligence Unit’s list of most liveable cities year after year; Vancouver, Toronto and Calgary ranked third, fourth and fifth respectively in 2017. But we are smug about our growing brand of urbanism at our own peril.

MORE: For many Canadians, home won’t be a house

Cities, and how we live, have always been in a state of evolution as driven by political, social, cultural and technological considerations. So as much as I would like to credit urban planners for advocating for and advancing denser urban living in our cities as key to those excellent rankings, the stability of our banking and education systems, as well as the comprehensiveness of our health care delivery, all play a central role. Good governance at all three levels of government makes our cities work.

On the one hand, housing is about social justice if we agree that housing is a human right. Everyone in our country needs to be housed—full stop. On the other hand, it is also about the overall economic sustainability of our national economy. Both interests matter and ought not to be played one off the other. As a stark example, in its callout for proposals to lure its second head office, Amazon identified affordable housing for its workers—despite boasting that it would offer more than 50,000 high-paying jobs—as a key evaluative criterion that it would use to assess whether cities were a good fit. This example, explicitly, shows how access to housing for workers is an economic development driver—and it’s no longer assumed, as it may have been a generation ago, that people with high-paying jobs didn’t need affordable housing. In our biggest markets like Toronto and Vancouver, where housing prices recently detached from both demographic change (like household growth) and wages, affordable housing matters for everyone—not only vulnerable populations. 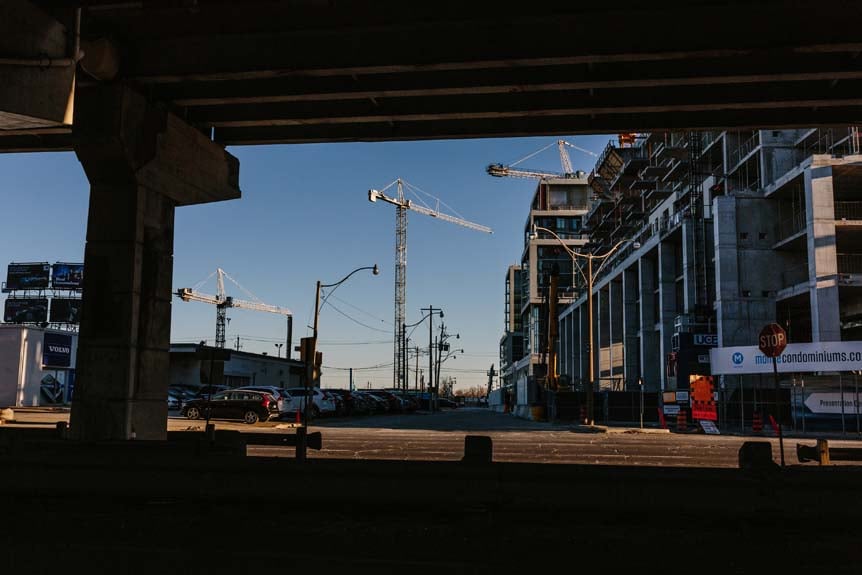 Vancouver and Toronto, despite their successes, need continual reinvention like any other city. As both of these cities’ real-estate markets have become truly hot over the past decade, they have also become less accessible for the key workers that make them tick. Many households simply cannot afford appropriate housing. Families are burdened with a long commute precisely because they cannot afford to live close to work. Young people are bounced from rental to rental at the mercy of investors, unprotected by the price stability that comes from rent controls. Seniors, for whom the cognitive benefits of living in walkable communities is well-established, end up enclosed in suburban long-term care facilities disconnected from the fabric of everyday life. Many more of those perceived to be in the middle class in Canada live with well-founded insecurities: what if interest rates rise a point or two and mortgage payments become out of reach? What if my landlord decides to sell, and I’m forced to find a new place in this aggressive rental market? We’ve gotten this far precisely because we have been willing to embrace change.

And now it’s time to fundamentally rethink our housing system.

It was hoped that the federal government’s recently launched National Housing Strategy would offer some new solutions to redefine Canadian housing markets. After all, it’s a pretty loud clarion call when the Canada Mortgage and Housing Corporation (CMHC) states that Canadian housing markets are “highly vulnerable and at risk of being hit by overbuilding, overvaluation and too-quick price appreciation,” just weeks before the government’s strategy was actually released.

But while the National Housing Strategy begins to tackle the first issue with “deep affordability” measures such as significant reinvestment in existing social housing stock, and $2,500 vouchers for low-income families to assist in paying the rent, it’s not enough. Merely subsidizing a broken system doesn’t fix or change the system. Whereas the federal strategy starts with Canada’s vulnerable populations, the next step must be to address supply-side challenges with supply solutions. And here Vancouver steps up, with its newly released Housing Vancouver strategy, acting as a beacon and showing the rest of the country a way forward. Recognizing that we need to act quickly to correct the imbalance in our current housing stock by adding more choice, particularly for families who are burdened by stagnating wages combined with escalating transportation and childcare costs, Vancouver has launched a supply-driven strategy that emphasizes the “right kind” of supply: adding affordable rental housing in existing neighbourhoods where it might not currently exist.

Vancouver isn’t shying away from reinvention. Acknowledging that speculation is a barrier to a healthy housing market, Vancouver’s strategy positions the city for an influx of affordable rental, promising to rezone low-density neighbourhoods for rental housing, step up the development of laneway housing, and reconnect rental prices to what people can afford to pay. It’s a different exercise to design and build a city for people who want to live and contribute to the city, as opposed to creating a city for investors. While the real-estate frenzy of the last 18 months has provided endless cocktail-party fodder, there has been little acknowledgement from public officials that a speculation-driven housing market will not house everyone, and as such needs to be upended with policy solutions that seek to ensure the housing we build is once again about housing people who live and work and contribute to our cities. We can mitigate speculation and increasing instability in Vancouver and Toronto in particular by providing an influx of affordable rental in the short term. Our current crisis demands this kind of transformation of our housing system, rather than simply patching it back together and hoping it will last another day.

Some might consider the Housing Vancouver strategy to be too interventionist, too in the weeds. But it’s time to call out and specifically identify market failures in a housing system that is perpetuating unsustainable levels of household debt, discouraging young people from having families and consigning another generation to a long commute. We can begin to do so by recognizing that not all housing is an investment. We can also do so by acknowledging that few—very few—benefit over the long-term when we allow speculation to fuel our housing development industry. We can create a new tier of housing in our cities by expanding our affordable rental stock—not because it is an asset class, but because this is the best way to provide stable homes for an entire next generation in our cities. While Housing Vancouver proposes an ambitious reinvention of the city for the 21st century, history demonstrates that cities cannot go it alone. Rezoning specifically for rental, embracing innovative taxation policies, advancing greater construction loan financing for rental housing—there are a myriad of ways that all three levels of government can stabilize our housing system, and our economy. We must get cities the funding they need to envision themselves for a sustainable future.

If our ambition is to truly strengthen the middle class in Canada, after all, we are going to have to adapt the way we provide housing in our biggest cities to do it.