Jian Ghomeshi's #MeToo moment: It's all about him

Anne Kingston: Ghomeshi's essay extinguishes any doubt as to whether his years in imposed exile delivered insight, wisdom or contrition 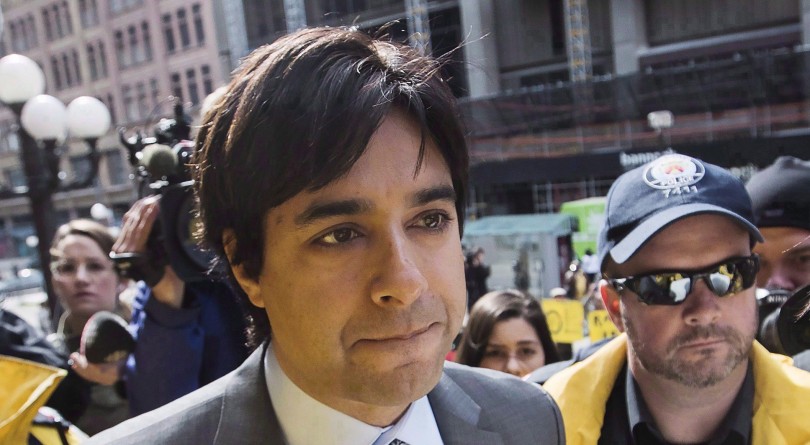 Jian Ghomeshi arrives at court in Toronto on Wednesday, May 11, 2016. (THE CANADIAN PRESS/Mark Blinch)

There’s much to be said about the venerable New York Review of Books  publishing Jian Ghomeshi’s bad essay “Reflections from a Hashtag.” But first, full marks to the art director who chose to illustrate it with Edvard Munch’s “Evening, Melancholy I” depicting a brooding man at sunset.

What better accompaniment to a brooding, self-referential essay brimming with self-pity absent any self-awareness?  The word “I” occurs in it no less than 145 times. And, in a perfect synchronicity, while reading “Reflections from a Hashtag,” another more famous Munch painting comes to mind: “The Scream.”

It has been four years since we’ve heard directly from Ghomeshi, the former marquee CBC radio host of the popular program Q who was accused by 24 women of sexual harassment and/or violent behaviour. He was acquitted of four counts of sexual assault and one count of choking involving three complainants in March 2016. A second trial involving one count of sexual assault was cancelled in return for Ghomeshi signing a peace bond and offering a public apology to complainant Kathryn Borel, his former CBC colleague. She responded with a blistering statement on the stairs outside of the Toronto City Hall courtroom.

Ghomeshi’s essay extinguishes any doubt as to whether his years in imposed exile (“the closest I come to public performance is at a neighborhood karaoke bar in New York,” he writes wryly) delivered insight, wisdom or contrition. They didn’t. The hashtag referenced in the odd title is to #MeToo, the movement that took off in Oct. 2017. Ghomeshi suggests he deserves the credit: “One of my female friends quips that I should get some kind of public recognition as a MeToo pioneer,” he writes. “There are lots of guys more hated than me now. But I was the guy everyone hated first.”

The perverse boast indicates Ghomeshi really, seriously doesn’t get it. #MeToo pioneers were not the guys who abused. They were the women who came forward against powerful men who violated and traumatized them, often sidelining their careers. Ghomeshi referring to this “quip” indicates his tone-deafness to both his own situation and the larger cultural moment.

“I’ve been aware that weighing in to reclaim it and inject nuance into my story is fraught, to say the least,” Ghomeshi writes. No argument there. That isn’t to preclude hearing from Ghomeshi. But to inject nuance into his “story,” he must acknowledge its full scope.  And that includes the two dozen women who trusted him who said he hurt them physically, including choking and punching. It includes his reign of bullying terror at Q, and allegations of abusive behaviour that dates back to his days at York University.

READ MORE: ‘I hope that I can find forgiveness’: Read Jian Ghomeshi’s apology

Ghomeshi describes his former self—“I had become a man who derived all of his self-esteem from external validation”—but there is no evidence anything has changed.  His new identity is one of “an erstwhile ‘celebrity’ who is now an outcast.” He was suicidal; people he thought were his friends bolted; he had to deal with the death of his beloved father; he faced ugly racist remarks; his YouTube podcast exploring Big Ideas met with virulent blowback.  He doesn’t only feel sorry for himself; he feels sorry for everyone forced to deal with his plight. “You can see the anxiety in their faces as they stammer out banalities, studiously avoiding the subject of career (or lack thereof), making vague gestures of encouragement that trail off into silence.”

Ghomeshi appears to still cleave to his “progressive” hype: “I did interviews with everyone from Toni Morrison to Gloria Steinem, Drake, and Maya Angelou. I attended demonstrations and spoke at progressive fund-raisers. It didn’t occur to me that I could ever be one of the bad men.”

Even now, he doesn’t believe it, only once addressing in vague terms “my own behaviour”: “And at some point, when it came to women, I began to use my liberal gender studies education as a cover for my own behavior.”  Some of the accusations were “inaccurate,” he writes, without saying which ones.

Ghomeshi’s apology is milquetoast: “What I do confess is that I was emotionally thoughtless in the way I treated those I dated and tried to date,” Ghomeshi writes, without addressing serial charges of violent physical assault. “I ought to have been more respectful and responsive with the women in my life. To them I say, you deserved much better from me.” He frames himself as a “player” or a “cad”: “There are all sorts of old-fashioned words to describe men like this: player, creep, cad, Lothario.” Yes, those are old fashioned words. More modern ones are predator, harasser, abuser.

READ MORE: What Jian Ghomeshi did

Yet it’s Ghomeshi who sees himself as the victim, using second person: “But you’re furious, too, at being made fearful by everyone who’s trying to bring you down.” He even has harsh words for the PR people he hired in 2014 when the scandal broke: “The professional team that I had hired as experts to guide me through the explosion bolted, too—but not before they had cheered on some ill-advised social media postings and threatened lawsuits.” Given the fallout already from the essay, one senses Ghomeshi’s current publicist will soon face the high jump.

The rumination is part of a NYRB cover package titled “The Fall of Men”—which coincides with many famous men accused of sexual harassment and abuse, including Louis CK, returning to the spotlight.  (NYRB editor Ian Buruma explains the rationale to publish it here.)  It clearly was not rigorously fact-checked. In one instance, Ghomeshi writes that he “was fired from my job at the Canadian Broadcasting Corporation after allegations circulated online that I’d been abusive with an ex-girlfriend during sex.” That isn’t true. He was fired because the Toronto Star was about to run an investigative story: it reported four women had come forward to say Ghomeshi had assaulted them; within days, the Star reported  eight women had come forward to accuse Ghomeshi of assault.

Ghomeshi’s attempt to tie it all up in a neat bow fails. “What I am is someone who has had a crash course in empathy,” he writes, providing zero evidence. “I have a new unwavering antipathy toward schadenfreude.”  Employing prosaic language that should never appear in a publication that has been home to the work of Mary McCarthy, Lorrie Moore and Norman Mailer, Ghomeshi writes: “And with all of this, I am moving toward what might be seen as a trite point: we learn from our mistakes.”

So what has Ghomeshi learned? He’s had “enough humiliation for a lifetime” but expresses no corresponding shame or contrition. “My acquittal left my accusers and many observers profoundly unhappy There was a sentiment among them that, regardless of any legal exoneration, I was almost certainly a world-class prick, probably a sexual bully, and that I needed to be held to account beyond simply losing my career and reputation.”

It is beyond Ghomeshi’s ken to mediate more fully on that new grey ground that sees him legally acquitted but judged in public opinion. There is no reflection on what it was like sitting in a courtroom where his accusers’ testimony was shredded for inconsistencies, false statements and omissions, while the details of their accounts of the actual attacks remained intact. Ironically for a piece titled “Reflections on a Hashtag,” Ghomeshi appears oblivious to the hashtags that were  inspired by his trial:  #IBelieveWomen and #RapedNeverReported. They reflected a new cultural consciousness, realized in #MeToo, of the importance of listening to the small percentage of women who report assault.

Ghomeshi ends the piece with an odd story about striking up a conversation with a woman on the train between London and Paris presumably meant to convey his new awareness. He reports “positive sparks” between them. They talked. He listened without trying to impress her or name drop. “But this interesting woman was speaking to me without knowing or caring if I was Somebody. As if maybe I had the ability to be worthy without reciting my résumé.” They said their polite goodbyes. Their physical contact is a polite handshake. This is supposed to be a happy, enlightened ending. Given all that has come before, sadly, it is.

Correction: This story has been revised to reflect the fact that the first Toronto Star story in Oct. 2014 featured reports from four women that Ghomeshi had assaulted or harassed them, not eight; a second story, published days later, featured allegations from eight women.