John A. Macdonald can wait

Stephen Maher: We are at the beginning, not the end, of a process of reassessing our history, and filling in the silences that are needed to get at the truth 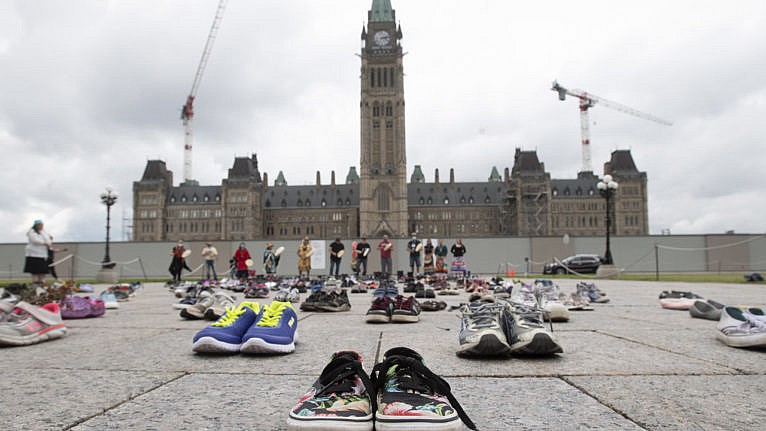 Shoes sit in front of the Parliament buildings during a ceremony on June 3, 2021 in Ottawa (Adrian Wyld/CP)

Alberta Premier Jason Kenney spoke out against “cancel culture” last week and in defence of Sir John A. Macdonald, the first prime minister of Canada. “I think Canada is worth celebrating,” Kenney said. “I think Canada is a great historical achievement. It is a country that people all around the world seek to join as new Canadians. It is an imperfect country but it is still a great country, just as John Macdonald was an imperfect man, but was still a great leader.”

Kenney was speaking against calls to take Macdonald’s name off schools and remove his statues, which grew louder after the shocking discovery of the unmarked graves of 215 children on the grounds of the Kamloops Indian Residential School. Macdonald was the architect of the system that led those children to those unmarked graves.

These changes are difficult for Macdonald’s admirers, but leaving the names on schools and the statues standing is much more painful for the victims of the system Macdonald built. It would be heartless, for instance, to ask Indigenous parents to send their children to schools named after the man who caused so much suffering.

And in light of the tragic discovery of the graves, it is appropriate to reconsider whether Macdonald was really a great leader. The bereaved parents would surely not see him that way.

I think that is a judgment best rendered at some later date, after we have considered new facts. Canadians have inherited a reverence for Macdonald from earlier generations based on a historical narrative that was largely silent on the price paid by Indigenous people. Old biographies of Macdonald did not even consider the deaths in the schools, a silence that seems strange to modern readers.

This silence is an intrinsic part of the colonial system that destroyed Indigenous communities. Canadian settlers wanted the land that Indigenous people occupied so that they could lay railroad tracks, plant wheat, dig mines, build cities. To do all that, Indigenous people were moved to reserves far from the railway and subjugated, made to accept the authority of the Crown.

Macdonald looked to the United States, where residential schools were being used to destroy Indigenous communities, and imported the system. Canadian colonization was not marked by large-scale mass killings as happened south of the border, but the result was the same: dispossession, powerlessness, hunger and disease.

At the time, most settlers—particularly powerful church leaders who stood to harvest souls in the wilderness—believed that the schools would help civilize savage peoples. The fact that the schools were death traps, where children were starved, neglected and subject to terrible abuse, was not part of the story Canadians wanted to tell themselves. Just as slave-holding societies convinced themselves that slavery was part of the natural order—the best thing for the Africans as well as the slave holder—so Canadians believed the schools were good and necessary.

“Built into any system of domination is the tendency to proclaim its own normalcy,” wrote historian Michel-Rolph Trouillot in Silencing the Past. “To acknowledge resistance as a mass phenomenon is to acknowledge the possibility that something is wrong with the system.”

Trouillot, who spent much of his career studying the tragic history of the Haitian revolution, observed that the omission of facts is always part of producing history.

Indigenous people, who were mostly left out of our history books, are now demanding to be written in, the result of a long struggle to be seen and heard.

We would not know much about what happened at the schools if it had not been for Nora Bernard, a Mi’kmaq woman from Millbrook, N.S., who brought a lawsuit in 1995 that ultimately led to the Truth and Reconciliation Commission.

The people who wrote our old history books were not interested in the experiences of Bernard and other victims of the schools, in part because the scale of the tragedy was not apparent to them. The deaths were not recorded.

Historians created the narrative of Macdonald as a great leader with the benefit of what Trouillot called “archival power.” “Silences are inherent in the creation of sources, the first moment of historical production,“ he wrote.

Consider that the Missionary Oblates of Mary Immaculate, who ran the Kamloops school, have, until this week, refused to open their archives to the people whose children died there. The federal government has spent $3.2 million fighting residential school survivors from seeing records of abuse at one school.

And consider that the Royal Canadian Mounted Police—who made sure children were taken from their families to attend the schools—are in charge of investigating the discovery of the remains.

We can’t know, yet, what to tell our children about Macdonald. We are at the beginning, not the end, of a process of reassessment. “Any historical narrative is a particular bundle of silences, the result of a unique process, and the operation required to deconstruct these silences will vary accordingly,” Trouillot wrote.

Kenney is urging us not to reconsider the conclusions we have reached, which shows a lack of respect to the people whose children ended up in unmarked graves.

There can be no reconciliation without truth.

Bryan Stevenson, an American civil rights activist, put it this way: “If you’re genuinely engaged and recovering from human rights abuses, you have to commit to truth-telling first. You can’t jump to reconciliation. You can’t jump to reparation or restoration until you tell the truth. Until you know the nature of the injuries, you can’t actually speak to the kind of remedies that are going to be necessary.”

Heartbreakingly, we haven’t found all the unmarked graves yet. Reassessing Macdonald can wait.