Justin Trudeau has fallen for his own image

Adnan R. Khan: When a leader decides they have all the answers, and want the levers of democracy to align to their vision, only bad things can happen 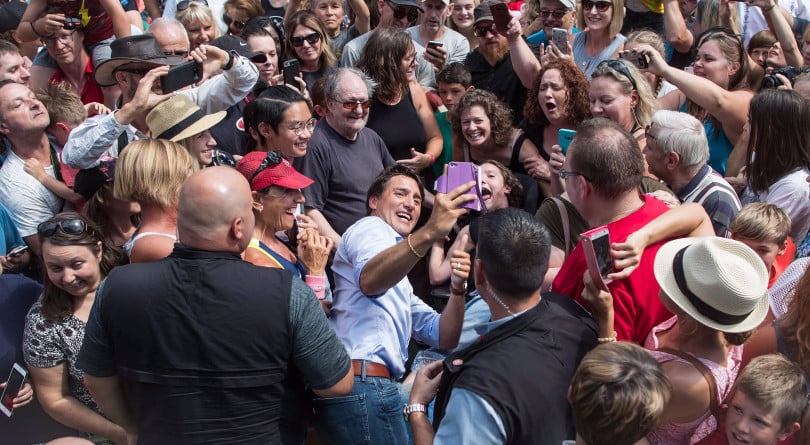 Remember back in December 2015, when Justin Trudeau leaned so heavily into his sensitive-everyman shtick, greeting Syrian refugees at Pearson international with a smile so painfully endearing it made you feel like Canada really deserved the rather condescending trope of the dorky but nice northern folk?

And then, a couple years later, there was Trudeau again, draping himself in gawky Indian garb on a trip to a country where Indians these days are much more comfortable in khakis and a golf shirt. That was supposed to reflect Canada’s embrace of multicultural values, at least I think it was, but it really just ended up looking dorky, and not so nice.

The theatrics didn’t even come close to the reflecting the reality of Trudeau’s leadership. Canada’s actual response to the refugee crisis in 2015 was woefully inadequate. Even today, despite all the rhetoric of openness and empathy for the world’s vulnerable, Canada still only accepted a miserly 14,790 refugee referrals in 2018. Our immigration and refugee system, as I’ve written before, is not based on values or empathy; it is based on economics.

The India fiasco was of a different species. The sartorial faux-pas could be forgiven but it was hard to overlook the presence of Jaspal Atwal, the one-time Sikh separatist convicted in India of trying to assassinate the Indian prime minister, on the list of VIPs traveling with Trudeau.

Whether flipping pancakes in a meme-ready cowboy outfit or photo-bombing newlyweds, Trudeau’s social media brand is the envy of progressive leaders around the world. The careful nurturing of his public persona—the champion of liberal values, a feminist with a high emotional IQ and other such hazy accolades—fits neatly into the political niche left vacant after Barack Obama exited the White House.

Trudeau is now everything liberals around the world hoped Obama would be, the foil to rising right wing authoritarianism, a handsome and youthful leader who speaks for the up-and-coming generations longing for a break from the old ways of politics. It’s almost become cliché outside of Canada: mention being Canadian and people inevitably say, “Oh aren’t you lucky to have Trudeau!”

We are lucky, but not because of Trudeau. We’re fortunate we have a political system that is still relatively stable and inclusive, though it may be fraying at the edges. Where our luck could run out is when ideological certainty muscles its way into complex issues, when leaders, Trudeau included, decide they have all the answers and if only the levers of democracy would align to their vision, the world would be such a better place.

Is Trudeau falling prey to his own image? His handling of the SNC Lavalin affair would suggest so. What stuck out most to me in recent revelations was the insistence with which Trudeau appeared to be pursuing his agenda. Over the course of the now-infamous 17-minute telephone conversation between Jody Wilson-Raybould and Michael Wernick, Wernick said no less than four times that the Prime Minster was “firm” about his position on the SNC-Lavalin file. “He is gonna find a way to get it done one way or another,” he warned.

Then there was the god-awful quip Trudeau attempted after a protester at a Liberal donor event was being removed. “Thank you very much for your donation tonight,” he bellowed, to the laughter and applause of the wealthy elites holding court with the PM.

His subsequent apology did little to fix the damage. And why would it? Apologies are easy. It’s much harder to re-build a broken public image, especially when it was constructed from flimsy material to begin with.

The sad fact is that the collapse of Trudeau’s brand is infecting the Liberal party. It doesn’t deserve it. I have been impressed, for instance, with Chrystia Freeland’s poise on the international stage. The Liberal government has shown more deep thinking when it comes to handling the fight against ISIS in Iraq and Syria. It has used Canada’s resources much more effectively in places like the Mediterranean Sea and Ukraine. And its principled stand against Saudi Arabia’s excesses has been laudable.

But when the leader of a nation embraces his public façade as fact, we’re in real trouble. It is the first step toward authoritarianism.

All authoritarians believe what they do is for the good of their nation. Here in Turkey, Recep Tayyip Erdogan rails against his critics for endangering the path of glory upon which he claims to have set his nation. Stop your moaning about due process, constitutional norms and all that cumbersome legal jibber-jabber, he intimates, I know what I’m doing.

Erdogan, of course, likes to jail his detractors, and Turkey’s laws are such that he can do so with relative abandon. Trudeau is more encumbered by law but the underlying motivation—the near-prophetic faith in his progressive mission—feels unsettlingly familiar.

Before Erdogan, secular, progressive Turks also had their white knights, the Kemalist elites who threw all sense of equanimity to the wind in pursuit of their version of progress. There was nothing inherently wrong with that vision—who wouldn’t want a pluralistic, democratic, secular Turkey based on the rule of law—but the way they went about it undermined the project itself. Kemalist disregard for pluralism, its rabid hatred of religious conservatives and Kurdish identity, only served to galvanize conservative and Kurdish discontent. Now, under Erdogan, the conservatives are taking their revenge and the Kurdish issue has metastasized into an insurgency with no sign of ending.

Of course, Canada is nowhere near the political dysfunction we’ve seen in Turkey, or the U.S., or parts of Europe. But the irony, or perhaps inevitability, is that Trudeau’s failure is precisely what could hand over power to Canada’s own right wing ideologues. This is what happens when leaders embrace their own vision of the world and believe they are the ones to impose it. There is often an equal and opposite reaction. And in Canada that could mean the end of our place atop the world’s progressive nations.