Justin Trudeau is going to have to buy himself a pipeline

Stephen Maher: Putting up the money for Kinder Morgan would help Rachel Notley, reassure investors and give B.C.'s John Horgan an out 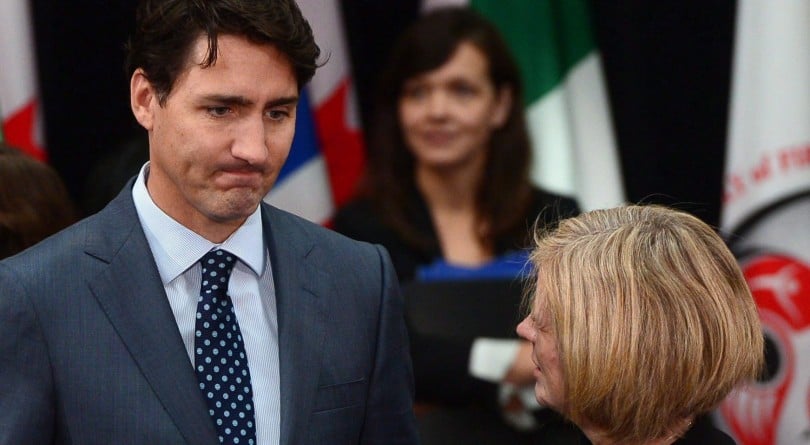 The Alberta-British Columbia pipeline dispute is a Gordian knot, and there is no way to cut it, so Justin Trudeau is going to have to buy it.

Trudeau must act because last Sunday, Kinder Morgan announced that it was suspending construction work on its pipeline from Edmonton to Burnaby because of “extraordinary political risks that are completely outside of our control and that could prevent completion of the project.”

Kinder Morgan has spent $1.1 billion on the project since 2013—mostly on engineering, legal and regulatory work. Now it is time to lay pipe, which means dramatically ramping up its daily burn rate, spending billions more before the pipe can start operating in 2020.

The company says it won’t throw good money after bad until someone can do something about the NDP government of John Horgan in B.C., who promised in the election last summer to try to stop the project.

Horgan has already backed several other projects—the Site C dam and an LNG terminal—that environmentalists oppose, and his government would fall without the votes of three Green MLAs, so he likely can’t back down.

Neither can Alberta Premier Rachel Notley, who must answer to frustrated oil workers. Under withering pressure from likely future premier Jason Kenney, she has been spitting venom at Horgan. She even briefly stopped B.C. wine imports and is threatening to cut off fuel supplies to B.C.

Trudeau has no choice but to help her.

To become prime minister, he promised sunny ways: a conciliatory approach to climate and energy policy. In exchange for Notley’s support for a carbon tax—the best way to reduce greenhouse gas emissions—he would help her sell her oil.

She has brought in an ambitious climate plan. And what has she got from Trudeau?

Not much. Alberta gets about $20 less per barrel for its oil because it can’t get its product to tidewater, where it would fetch a higher price. Trudeau killed the Northern Gateway pipeline and let the Energy East pipeline die. If he lets the Kinder Morgan pipeline die as well, he might as well campaign for Kenney, who sees the carbon tax as something akin to a communist plot.

Environmentalists say that climate change is such a huge problem that we should stop building pipelines and be prepared to leave bitumen in the ground. They have a point, but if we are not going to do that, which we are not—at least not yet—then we must get the oil to market. Pipelines are the safest way to do that.

And Notley has done more to reduce emissions than any Alberta government has ever done. To convince Albertans skeptical of all this climate business, she swore she was earning a social licence for Alberta to export its oil. It’s time for Trudeau to deliver that licence and get that pipeline built.

He seems to know that. After Kinder Morgan made its announcement, he called an emergency cabinet meeting, at which he asked Finance Minister Bill Morneau to come up with a plan. On Thursday, he announced that he would fly back from Peru to meet with Horgan and Notley on Sunday.

That meeting is unlikely to be pleasant for Horgan, who is already under nasty pressure from British Columbia’s business community.

But Trudeau can’t threaten to cut off transfer payments to B.C., not if he wants to get any of his 18 B.C. Liberal MPs re-elected.

Horgan has already moved from promising to stop the pipeline, which he can’t do, to promising to defend B.C.’s interests, which is his duty. Trudeau likely can’t even attack him much for doing that.

What he can do is put enough money on the table to convince Richard Kinder that the pipeline is going to be built, no matter what Horgan says or does.

In 1993, when the Hibernia project off Newfoundland was in trouble, Brian Mulroney put $2.7 billion into it, which has, as it happens, paid off handsomely for Canadian taxpayers.

Trudeau is likely to do something similar now to save the Kinder Morgan pipeline. He could even buy the whole thing and sell it back to Kinder Morgan when it is completed.

A deal like that would help Notley, send an important message to international investors, allow Trudeau to be seen to be taking action on the economy and take away a cudgel from Kenney. And it would allow Horgan to throw up his hands, tell the Greens he did what he could while secretly sighing in relief.