Andrew MacDougall: A holiday marking the residential schools tragedy is an easy—if overdue—gesture. But picking a date on a calendar won't be enough to solve our collective history problem 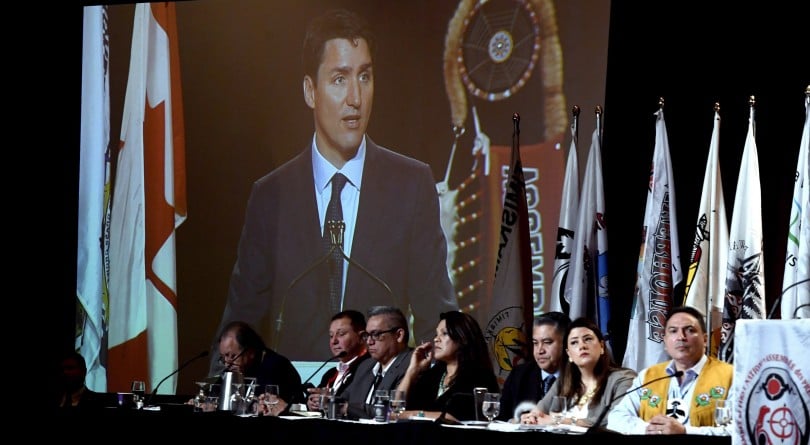 Trudeau, seen on a screen behind, delivers an address on May 2 at the Assembly of First Nations Special Chiefs Assembly, in Gatineau, Que. THE CANADIAN PRESS/Justin Tang

How poor has Justin Trudeau’s delivery been on Indigenous files?

Well, let’s just say it wasn’t from a position of strength that the Liberals this week floated the creation of a new holiday to commemorate the shocking history of Canada’s residential schools. By giving their tentative backing to an opposition bill. Anonymously. With the date and the format TBD. It was an “announcement” as light as air.

For this reason, Indigenous peoples should probably avoid holding their breath. If the still-going-nowhere-three-years-in inquiry into Missing and Murdered Indigenous Women and Girls is any indication, the holiday date could be a long-time coming. This is a government, after all, that still hasn’t changed the name of the “Indian Affairs” department a year after promising to do so.

Nevertheless, understanding more about this shameful chapter of our history is a good thing; Stephen Harper’s 2008 apology in the House of Commons was only meant to be the prologue to the Government of Canada’s response on the question of residential schools. The announcement of the holiday is at least a step forward.

That’s why Indigenous groups are welcoming the news. “A day dedicated to remembering and honouring the students of residential schools will help to increase public understanding of our shared history, and better inform our work together going forward,” said the Assembly of First Nations (AFN).

If you’re keeping score at home, the statutory holiday is item No. 80 (of 94) in the list of action items flowing from the Truth and Reconciliation Commission. Trudeau promised to do ‘em all—well, he originally promised to do ‘em all but then curtailed that “all” to the 76 under federal jurisdiction—and hasn’t managed to do many of them, as the government’s own promise tracker attests. The same holds true for many of the recommendations in the United Nations Declaration on the Rights of Indigenous Peoples, another suite of pledges guaranteed by Trudeau. It isn’t exactly the new relationship that was promised.

Hence the Liberals’ plucking of the holiday—the lowest of low-hanging fruit—from the list. But will the day off have its intended effect?

Giving a day off work to all federal employees usually isn’t the best way to get anything done, other than create traffic jams on the 5, 50, 416 and 417. Should we expect a holiday on such a serious question to produce a different result? It’s not likely.

And that’s a shame. It could, however, be why the government is reportedly still considering modeling the holiday after Remembrance Day as observed in Ontario and Quebec, to ensure schools and private sector employees are able to participate. This is the better course.

But even then, the painful history will flash before our eyes for a day, only to be forgotten when the next day comes into view. We’ll forget, because we don’t live with a daily reminder. It’s why we always forget, and why we’re rarely shocked into action in the first place.

RELATED: Why cutting Indigenous revisions to Ontario’s curriculum is a travesty

Many Canadians have never seen an Indigenous reserve, let alone been on one. And as more and more people move to the city, fewer will. It’s this distance that helps to keep our Indigenous past and present buried, not an unwillingness or meanness in our hearts.

We just don’t see the suicides. We don’t drink the foul water. We don’t deal with the poor governance. Or the poor schooling. We don’t suffer from the long distances to the places where most Canadians now work and receive their healthcare. In short, we don’t get what life is like. And that’s without the burden of our brutal history, or the commensurate loss of culture.

The last time most Canadians paid serious attention to the problems on Indigenous lands was when the problems visited Ottawa in the form of the Idle No More protests. And yet, even then, the problems receded quickly into the rearview mirror the second the pressure came off.

And while the Harper government tried harder than it is given credit for on improving things like infrastructure on reserve, schooling, and developing resource projects in partnership with Indigenous groups, it was in Trudeau that so many groups placed so much their trust. And even the most die-hard Liberal would be hard-pressed to say they’ve delivered on those sky-high expectations.

Sadly, solving our collective history problem isn’t as simple as picking a date on the calendar. The relationship with Indigenous peoples is in many ways the Gordian knot of Canadian politics. Instead of pulling at some minor strings, Trudeau should instead be bold and draw his sword.

And he had better do it before the goodwill runs out.