Opinion: The Liberal leader and her colleagues at Queen's Park were never able to help themselves 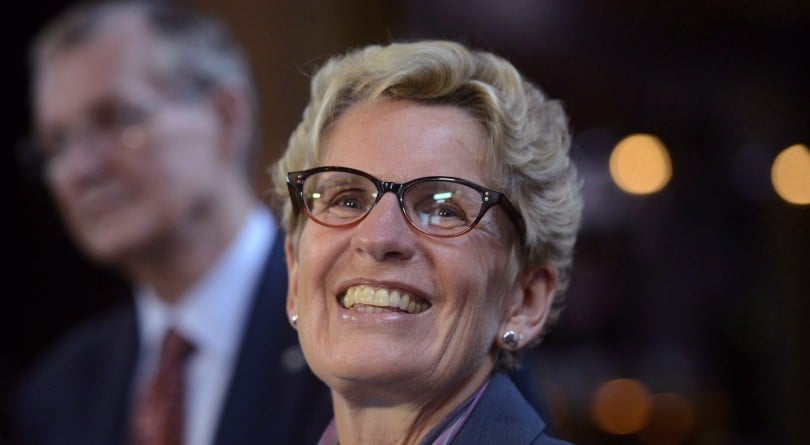 Mark Milke is author of Tax Me I’m Canadian! A Taxpayer’s Guide to Your Money and How Politicians Spend It.

When Kathleen Wynne admitted that her Ontario Liberal party has no chance of being re-elected to government on Thursday, and thus her time as premier is soon at an end, Wynne offered this advice to voters: Ontarians should elect a minority government.

Political scientists, analysts and pollsters will scratch their heads over this kamikaze-like political strategy and whether it has any precedent.

I can only think of one quasi-close example: Walter Mondale, consistently behind Ronald Reagan in the 1984 presidential polls. Mondale admitted he only thought once, briefly, that he might win. That vanishing hope arrived after the first debate with the Great Communicator, this when Reagan faltered and seemed forgetful. However, by the second presidential debate that year, Reagan was back in fine form and Mondale knew he was political cannon fodder.

READ: Ontario election 2018 platform guide: Where the parties stand on everything from hydro bills to taxes to transit

Key difference: Unlike Wynne, Mondale never told anyone what was in his head and heart until after his loss. That’s usually how politicians do it, this to keep up the spirits of their partisans.

How Wynne sees Ontarians: As hers

Odd political behaviour aside, Wynne’s I’m-losing-big announcement is not all that mysterious: She is exiting the political scene in the exact same way as she and her party have governed Ontario: As micro-managing control freaks.

Thus, this is Wynne’s last-gasp effort to try and control outcomes in Ontario for Ontarians as if they were wards of Kathleen Wynne.

If you think I exaggerate, consider the best example of such micro-managing—how the Wynne government approached beer and wine sales.

Ontarians are not provincial bumpkins who never travel south of the border or to Europe where private liquor stores and supermarkets that sell beer, wine and spirits are ubiquitous. But when this issue began to heat up a few years back, Wynne couldn’t just privatize the Liquor Control Board of Ontario and end the near-monopoly the province awards to The Beer Store. That would relinquish control.

RELATED: The one thing Kathleen Wynne should be sorry for

Wynne versus 11 million other Ontario adults

Instead, Wynne’s micro-managing impulses won out: That is why in a population of 14.2 million with 11 million adults, the government of Ontario under Premier Wynne would only, reluctantly, pry open limited consumer access: Wynne allowed just 70 grocery stores to sell wine. About 200 others are allowed limited selections of beer and cider.

Even in announcing the news of more stores “allowed” to carry some beer and some wine and some cider, here was the revealing, control freak line from the Wynne government’s news release last year: “Criteria were set to ensure fairness and geographic distribution.”

Right. No thought that perhaps Ontarians could decide for themselves in an open marketplace how many stores should exist that sell beer, wine and cider, and in what quantities and where. Nope. The Wynne government had to micro-manage outcomes.

To be fair, many politicians manage and micro-manage but not to the degree of Wynne. As a counter-example to her tendencies, when Alberta privatized government liquor stores in 1993, it sent this signal: We will regulate on critical matters such as age and over-drinking but not on consumer choice. That was sensible management of alcohol without the unnecessary micromanaging of consumers.

But Wynne and her colleagues have never been able to help themselves.

Wynne and predecessor, Dalton McGuinty, intervened to upset Ontario’s power market. They wanted to micro-manage outcomes to arrive at greener power generation—a nice outcome in theory but flawed in delivery. McGuinty’s political staff, some of who now direct the prime minister it should be noted, just couldn’t let coal-fired plants retire at the end of their natural life. That would have saved Ontarians money and provided for a gradual transition. Instead, the McGuinty-Wynne crowd intervened to micro-manage down cheap coal. That led directly to Ontario’s higher power bills.

READ: Sorry. Not sorry. What is Kathleen Wynne really saying?

That anti-reality, anti-market mistake led to a further micro-managing—this time by Wynne: Borrow money to cut ratepayer’s bills today by shifting costs to the next generation.

Wynne is addicted to such ad hoc, half-measures baked up in her own brain. Thus, when the silliness of the Ontario government’s beer and wine policy was challenged by PC leader Doug Ford, who announced he would allow expanded beer and wine sales in corner stores—as per the example of say, Quebec, or the entire European continent, Wynne responded it was “reckless”. Wynne, in typical micro-managing language, tweeted that her approach “balances convenience with responsibility — a rational approach.”

Actually, no. On multiple issues, from power prices to pot sales, to business subsidies to wine and beer, Wynne’s style has been consistent: Never trust the market combined with necessary but minimal and general regulation; never trust competition or consumers; in general—never trust Ontarians.

Now Wynne is leaving as she governed, again trying to micromanage Ontarians into yet another preferred Wynne outcome; this time, a minority government.

Companies, consumers, taxpayers and voters have the ability to act as adults without unnecessary and unreasonable management of the “micro” variety” from politicians above.  Under Wynne, Ontarians have, more than ever before, been treated like children by a controlling micro-managing premier.

Wynne doesn’t get it. She never did. Wynne’s inability to grasp that 11 million Ontarians are fellow adults is why she will suffer a Mondale-like political demise on Thursday. Ontarians want an end to being micro-managed.