Kathleen Wynne's re-election bid is off to a bad start

Jen Gerson: When you are seen to run a financially undisciplined nanny state, a pre-election spending spree is a bad idea 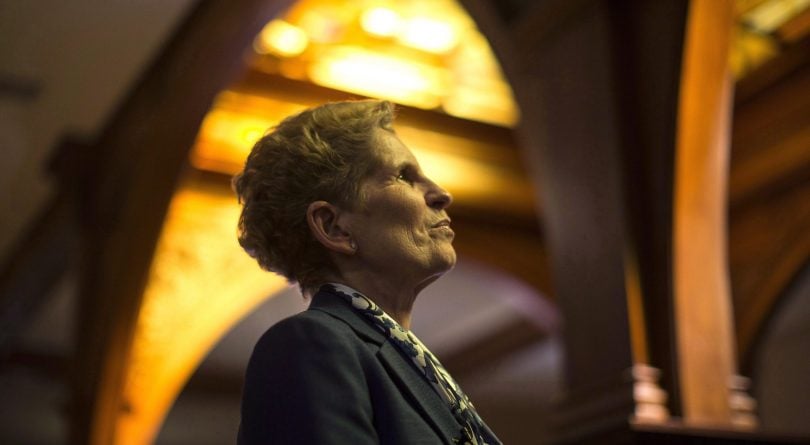 As a rule, voters love to be bribed with their own money. However, I am cautiously pessimistic that this maxim is not going to work for the Ontario Liberals.

The election is only three months away and Premier Kathleen Wynne—deeply unpopular and behind in the polls—is handing out multi-billion dollar spending promises like a charity Santa gleefully tossing free toys to kids on Christmas Eve.

A $2.1 billion investment over four years in mental health. Free prescription drugs for seniors over the age of 65—nevermind that seniors are now the wealthiest demographic in the country, and this proposal would replace the means-tested Ontario Drug Benefit program. A $2.2 billion program to expand free childcare for kids older than 2-and-half until they reach Junior Kindergarten.

Oh, and there’s more to come.

The budget has yet to drop, but the Liberals’ pre-election throne speech included promises to reduce hospital wait times, boost dental coverage, to expand access to home care, increase post-secondary grants. You get a car! You get a car! Everybody gets an electric car!

At the risk of offering a radically non-contrarian opinion, this feels both desperate and too obvious.

As someone who has advocated for a national childcare program as a necessary precondition to give women equal access to the workplace, an explanatory caveat is required here; any such program should be reasonable, transparent and fully costed—ideally by redirecting inefficient childcare benefits, or by raising taxes.

No free childcare advocate is suggesting that such a program be implemented as part of a broader plan to bribe the Ontario electorate into re-electing Kathleen Wynne. Certainly, no one should expect such a program to be announced before the province has a credible plan to deal with deficits, $312 billion in debt and annual debt servicing costs of $12.3 billion.

Ontario already has one of the largest debts of any sub-national entity in the world. Its top line items are: health care, education, social services and debt interest.

There is a time and a place for debt; but the time right before interest rates are about to rise and another recession seems statistically probable is not it.

“Our debt-to-GDP remains stable, and it is below 40 per cent,” Wynne said to reporters on Monday, ahead of a Wednesday budget largely expected to run another hefty deficit. “Those are the metrics that we are focused on.”

This statement is untrue and the ratio is meaningless to average folk. The debt-to-GDP ratio has steadily increased under Liberal rule.

The figure that should matter is how much money is going to service that debt—money that could otherwise go to the fancy social spending the Liberals love to promise.

It seems that the Liberals would do well to present themselves as responsible fiscal stewards committed to budgetary reform. Perhaps a credible plan to reduce cost-of-living by easing tax burdens. An audit of government spending. A sane path to escaping what looks perilously close to a debt spiral.

Clearly, the Liberal government is trying to out-flank the NDP to its left. But in doing so, it’s leaving itself open to charges on its most vulnerable front. Wynne’s attempts to massively increase the social welfare state just weeks ahead of an election is exactly the wrong approach for a party fighting the perception that it is irresponsible, corrupt and profligate. Every multi-billion dollar handout that hits the front page only compounds this problem.

Add to this, the Ontario government once again appears to be on the outs with its own auditor general. Last week, Bonnie Lysyk gave a report to a Queen’s Park committee suggesting the Liberals were using dodgy accounting practices to obfuscate the fiscal realities of its Fair Hydro Plan during an audit of its Independent Electricity System Operator (IESO).

Nevermind, everyone was getting cars.

It’s difficult to fault the spending priorities of the Wynne Liberals, per se. If Ontario were in the black and its people didn’t feel so excessively pinched by the tax man, supports for things like mental health and childcare would be fine. These are the sorts of things on which right-thinking and benign Liberal governments are apt to spend cash.

But when the general consensus is that your government is a financially undisciplined wannabe nanny state that probably can’t be trusted to direct any of these funds effectively anyway, spending promises will only breed resentment. Who wants a government that takes dollars and gives back dimes?

The last government that went on such an obvious pre-election spending binge was Stephen Harper during the closing days of the 2015 election campaign. He sprinkled infrastructure fund promises around the country ahead of the vote. Look how well that worked for him.

If the only thing the Wynne government can come up with to encourage people to vote for her is to throw more money around, this isn’t going to end well.