Michael Coren: Joe Biden was refused communion because of his stance on abortion. When it comes to the Catholic church, where do we draw the line? 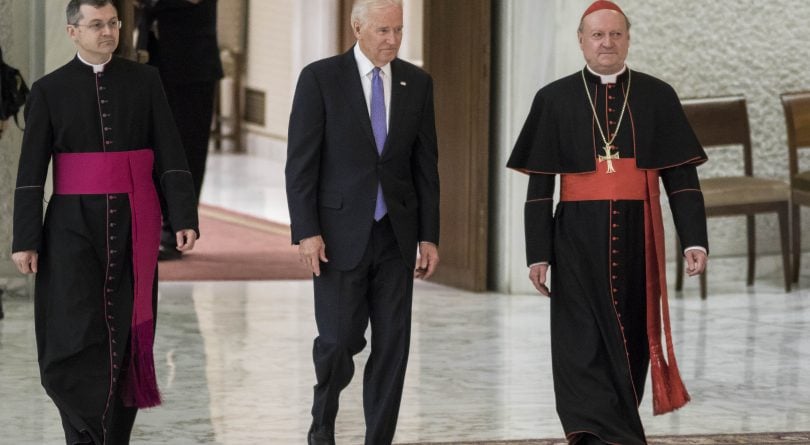 US Vice President Joe Biden (C) is flanked by Cardinal Gianfranco Ravasi (R) as he arrives to attend a special audience celebrates by Pope Francis in Vatican City on Apr. 29, 2016. (Giuseppe Ciccia/NurPhoto/Getty)

Reverend Michael Coren is an author and freelance journalist. His latest book “Reclaiming Faith” was published in Nov. 2019.

Last week, the former vice-president and current presidential hopeful Joe Biden, a practicing Roman Catholic, went to mass in Florence, South Carolina, just as he has attended countless such ceremonies. This time, however, there was a dramatic and profound difference. The priest at St. Anthony Catholic Church, Father Robert Morey, refused to give Biden communion, denied him what Catholics believe to be the body and blood of Jesus Christ. Such refusal is about as important a step as a priest can take. It’s incredibly rare, and almost unprecedented for such a senior politician.

In 2004, Archbishop Raymond Burke, a champion of the right, announced that he would deny the Eucharist to Democrat John Kerry, but that was never put to the test. There have also been demands for the same treatment to be applied in Canada to Justin Trudeau, and other political leaders who are Catholic, but it hasn’t happened either.

If the Catholic Church continues to proceed in this direction, it would be open season for conservative clergy in particular to chastise a myriad of liberal and progressive politicians, and also reintroduce a directly political church—one that we haven’t seen in Canada since before the Quiet Revolution in Quebec. This however, would inevitably lead to ongoing questions about the public funding of Catholic schools, and the fundamental issues of the separation of church and state.

MORE: The Catholic Church has a sainthood problem

But the reason for this particular controversy surrounding Morey and Biden is abortion. Morey made this clear in his public statement after the Biden affair: “Any public figure who advocates for abortion places himself or herself outside of church teaching. As a priest, it is my responsibility to minister to those souls entrusted to my care, and I must do so even in the most difficult situations.” Biden has refused to comment on what must have been deeply humiliating experience in front of his own community, describing the incident as part of his “personal life.”

Others have been less reticent. Father James Martin, one of the saner and more progressive voices in the American church, tweeted, “Denying communion to politicians, Democrat or Republican, is a bad idea. If you deny the sacrament to those who support abortion, then you must also deny it to those who support the death penalty. How about those who don’t help the poor?”

But he has been drowned out by the more organized and energized Catholic right. Father Frank Pavone, national director of the arch-conservative and pro-life group Priests for Life, stated, “I hope more priests will follow his lead by refusing the sacrament to politicians who not only support abortion but who advocate for taxpayer funding for the murder of children.”

MORE: Joe Biden is no Donald Trump—and in Steeltown that works for him

Apart from anything else, to use the word “murder” to describe the often painful and difficult choice of a woman at such a time says so much about Pavone, and his extreme anti-abortion position.

But here’s the point (and one that Martin suggested). There are numerous Roman Catholic politicians who support the arms trade, unjust wars, and capital punishment; who advocate for cuts to welfare, want to build walls, and place migrant children in camps. They stand against so many decisions that would ease the lives of the poor and marginalized. None of them are refused Communion, and there has never been a serious suggestion that they should be. Partly because it would make the church appear directly partisan, but also because abortion rather than social justice has come to characterize so many activists within contemporary Catholicism.

Attorney-General William Barr, for example, has worked tirelessly to reinstate the death penalty as federal law, which has long been opposed by the Vatican and is now even contrary to the church’s catechism, and yet he is revered by the same people supporting the rejection of Biden.

Pope John Paul II offered communion to politicians who were known to support abortion rights. He even offered it to British Prime Minister Tony Blair, who was not only in favour of publicly-funded abortion, but wasn’t even a Catholic at the time. Parish priests also give the Eucharist to people they know to have missed required days of obligation (masses that have to be attended), and who are living with partners outside of marriage or in same-sex relationships. It all depends on how enlightened, tolerant, and frankly, genuinely Christian the local priest is.

As Pope Francis said, communion “is not a prize for the perfect but a powerful medicine and nourishment for the weak.”

Unfortunately, pedantry sometimes triumphs over grace in the contemporary church. When Pope Benedict XVI was a Cardinal  he wrote, “Regarding the grave sin of abortion or euthanasia, when a person’s formal cooperation becomes manifest…he is not to present himself for Holy communion until he brings to an end the objective situation of sin.”

So what’s with the Catholic Church’s obsession with abortion? It’s difficult to see it as being genuinely about the sanctity of life, which has so many aspects beyond this single issue. I would personally like to see abortion rates drop, which they have done in various U.S. states, and would elsewhere, if health providers offered freely obtainable contraceptives, modern sex education in all schools, and universally available public daycare, and government organizations worked to eradicate poverty, empower women, and economically support mothers who are struggling financially. The Catholic Church opposes contraception, and in Canada has often fought against modern sex education. In other words, it does seem that this is more about control than concern.

This incident is significant not merely because of the status of Joe Biden, but also because it has set a precedent for other Catholic priests who have long been urged to do the same. I’d be extremely surprised if such an action wasn’t repeated, and not only in the United States.

Andrew Scheer dented his chances of winning an election partly because of his refusal to see beyond his conservative-Catholic attitudes towards life and sexuality, and many on the Catholic right—lay and clergy alike—are angry and active. Religious worship should, as Joe Biden said, be personal.