Andrew MacDougall: They aren’t gateways to serious news consumption; they’re pathways to polarization and misinformation. We can choose to stop watching. 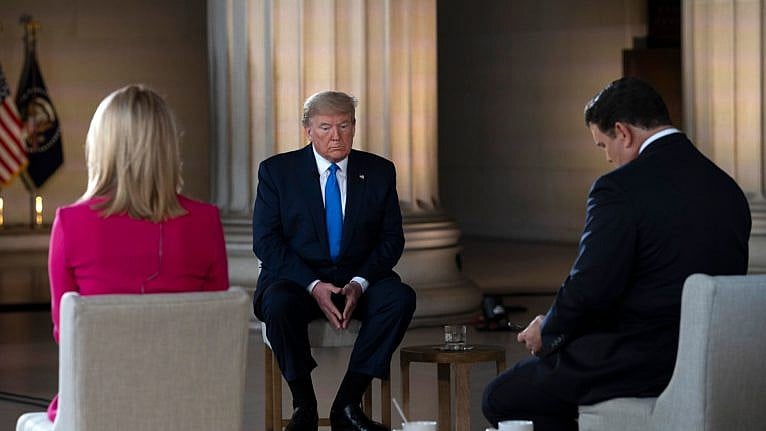 Trump takes part in a Fox News virtual town hall from the Lincoln Memorial in Washington on May 3, 2020 (JIM WATSON/AFP via Getty Images)

Now that Donald Trump has been fired by (enough of) the American people, it’s time to think about how to bin his accomplices: cable news and social media.

The Trump Era has been exhausting and the lion’s share of that exhaustion stems from our grossly expanded information economy. What used to come to us in dollops of papers and broadcasts is now streamed non-stop across all hours of the day on too many platforms to count. But there can be too much of a good thing. A glass of water quenches your thirst; a firehose knocks you over and leaves you drenched. It’s time to turn off the tap.

Whatever the intention at their points of creation, cable news and social media have flown a long way off course. Watching CNN or Fox News during (and after) the Presidential election was to subject yourself to a marathon of preachy monologues/inquisitions interspersed with furious nine-person panels, in which various partisans were invited to bark at each other, not listen to an argument or concede a point. It was a stark reminder of how far our public sphere has degraded.

But it’s actually worse than that. Cable news has also sought to make stars out of journalists but journalism isn’t meant to be celebrity entertainment. It’s supposed to serve a nobler purpose. It’s the work that’s meant to be important, not the author. What’s more, inviting reporters on to discuss or opine on the news of the day is to make them active participants, not impartial observers. What news value is there, for example, in having CNN’s Anderson Cooper calling the President of the United States of America an “obese turtle”? Is it any wonder that trust in the news is at record lows?

And if that wasn’t bad enough, social media then picks up the baton to make everything worse. Instead of bringing hidden expertise to bear on conversations, social media makes everyone ‘experts’ on everything, no matter what they don’t know about the subject. Even worse, the loudest and most extreme takes get the most attention. As study after study has shown, social media encourages people to indulge their emotions, not to apply logic or reason. These channels encourage us to huddle amongst like-minded people and then helps us radicalize. It makes enemies of citizens instead of encouraging a common understanding.

That’s why the sooner we get our politics and news off 24/7 platforms, the better. If the past four years of Trumpism have taught us anything, it’s that our brains simply cannot handle the volume of information they’ve been receiving. Seeing so much means we retain little of actual value. And it’s not just politics that suffers from this consumption pattern. Our recall with music, for example, was much stronger when we had to buy physical albums than it is now when we can stream literally anything for a few bucks a month. Everything now goes in one ear (or eyeball) and out the other.

It turns out quality content isn’t a gas; it doesn’t expand to fill the available space. If anything, whatever quality exists in our news environment now gets choked by the amateur fumes polluting our screens and feeds. Using quality to compete for attention in the 24/7 information economy is to lose the battle before it starts. Everybody is more interested in the outrage. A better approach would be to evacuate the pitch and find a new place to play, somewhere it has a chance of being noticed.

Pulling news content off social media would be a risk, yes, but it’s less of a risk than hoping the current information environment will improve. The news can either die on its terms or someone else’s, and right now social media companies and cable news programmers are incentivized to virality and outrage, not analysis or introspection. More importantly, their current output is cheap, unlike quality journalism. They do not, as presently constructed, serve a civic good. We wouldn’t miss them when they’re gone.

It would help if the media outlets took the first step of not seeding the outrage machine with the lifeblood of their content. It would also help if they forbid their reporters from appearing on cable shows. We have enough data now to know that social media and cable news aren’t gateways to serious news consumption; they’re pathways to polarization and misinformation. They are platforms for the already convinced. More pertinently, they’re not serious money makers for news organizations. Media organizations need to make their content scarce, not ubiquitous. It’s time to put up paywalls and demand money for quality.

And now that we’re all properly exhausted, people might be open to a return to the subscription model. I know my mood has improved significantly since I prioritized one paper in the morning to the exclusion of all others. And while I might miss some stories because of it, I trust in the quality of my morning read to know that I won’t be out of too many important loops.

As strange as it seems after years of the firehose, we’ll have to consume less to understand more.