Opinion: Scott Moe has been picked to succeed Brad Wall as the leader of the Saskatchewan Party—and he'll have to stitch it back together 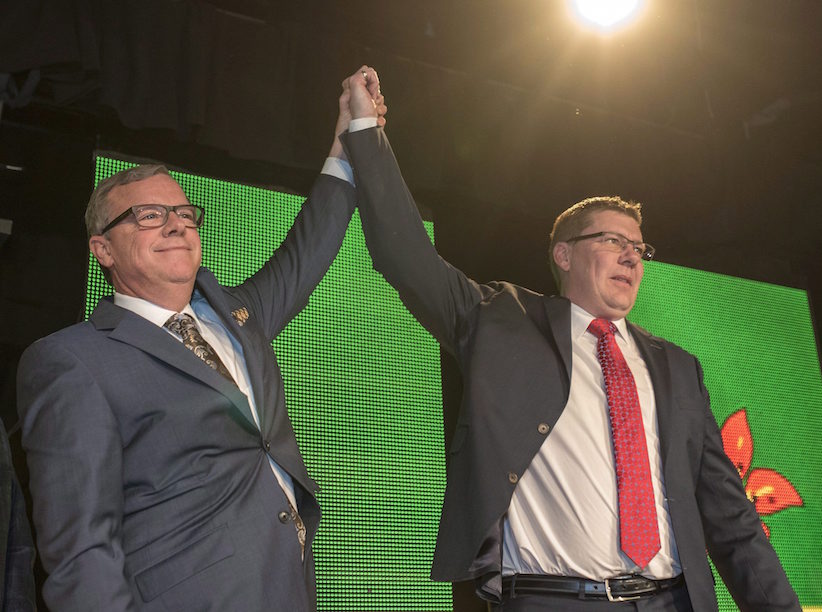 The morning of the Saskatchewan Party’s leadership convention, where Brad Wall said goodbye one last time and Saskatchewan’s new premier was revealed, dawned in Saskatoon under a blanket of fresh snowfall. An Alberta clipper, a parting gift from Saskatchewan’s recently estranged western neighbour, had just dumped more than six inches of snow on the region overnight. The provincial government’s online Highways Hotline map was blinking its warnings of loose and swirling snow, coupled with icy conditions for virtually every road leading into the city.

Yet by midday on Jan. 27, the parking lot of the Prairieland Exhibition Centre was full, lined with rows of pickup trucks, snow spray obscuring license plates and dirty clumps of ice clinging to wheel wells as evidence of their pilgrimage across the Saskatchewan prairie to be here for the occasion. The treacherous conditions, which would effectively shut down portions of Canada in other regions, equaled just another winter day in Saskatchewan, and were no match for the Sask. Party’s rural base, which showed up in droves.

After a tense reveal of round after round of voting results—staged almost exclusively for the drama, as there was a very limited amount of preferential ballots cast in-person at the convention—it was Rosthern-Shellbrook MLA Scott Moe who emerged victorious, earning the right to serve as the Saskatchewan Party’s first post-Wall leader, as well as receiving the keys to the office of the Premier of Saskatchewan.

Is Moe the best choice to lead their party and province back to the promised land? Well, 74 per cent of Saskatchewan Party voting members didn’t seem to think so. Moe received a mere 26 per cent of first-choice support at the end of the bitterly fought campaign, not reaching the 50-per-cent-plus-one majority required to win until the fifth ballot, which saw him finally take the win over longtime civil servant Alanna Koch, 54 to 46 per cent.

It’s not exactly a decisive mandate. Despite the fact that a post-leadership election “celebratory reception” was advertised as part of the convention itinerary, it didn’t take long for the massive convention hall to clear out, save for small pockets of individuals wearing Koch scarves or Ken Cheveldayoff stickers hunkered together, heads down and whispering furiously. Save for Brad Wall’s final speech, which was reminiscent of his victory speech on the night of his party’s first election victory in 2007, the room was largely divided into neat camps throughout the course of the day, with little to no display of support for the others amongst the top three contenders: Moe, Koch and Cheveldayoff.

In order for the Sask. Party to survive this leadership change, the large swath of the organization’s membership that did not put Moe down as their first choice—or in some cases, even their second, third or fourth—must be motivated to embrace him anyway. The four candidates who were defeated by Moe pledged to work with him as premier, and that sentiment of unity must not merely apply to Moe’s new caucus, half of which supported his candidacy: it must trickle down through constituency associations, and to potential voters in the next general election.

That caucus support is good news, to a point, as it should ensure some continuity in cabinet and in government in general. But the faces on the executive council may well change. Throughout the campaign, accusations flew of interference from staffers in the premier’s office on behalf of their former colleague Koch, including allegations from opponents’ camps—including Moe’s—that she was fed the leadership debate questions ahead of time. Whether this will result in immediate action from Moe remains to be seen, but there will at least be tension to overcome should he choose to move forward with Wall’s top aides.

But perhaps the biggest challenge Moe faces is bridging the rural-urban divide that is growing in the Saskatchewan Party. In a race where nobody had a clue what was going to happen and there was never a clear frontrunner, it was the man born and raised on a grain farm in rural Saskatchewan—and who still lives along with his wife and two children in his hometown of Shellbrook—who won. He has an agriculture degree, and throughout his campaign placed heavy emphasis on his farming background. Like the vast majority of his rural base, Moe is a card-carrying member of the federal Conservative Party, and he used country western music and farm imagery liberally throughout his campaign, which he kicked off in a trucking company-cum-farmyard; the majority of the Sask. Party’s country-living voters will very likely be satisfied, if not pleased, with Moe’s win.

READ MORE: Can the Saskatchewan Party keep itself together after Wall?

Saskatchewan cities, specifically Saskatoon and Regina, are another matter. The two cities comprise a combined 26 of 61 provincial seats, and are largely considered at risk for the Sask. Party in the next general election, a theory backed by recent poll numbers. Moe remains largely unknown in both centres, despite his cabinet positions—albeit in lower-key ministries like Advanced Education and the Environment.

Further, Moe distinctly lacks the charm and likability of Brad Wall. In his sometimes rambling victory speech, Moe stumbled over his words and failed to control the tone and volume of his voice, which varied wildly between low and monotone and rapid-fire and shouty. The contrast in presentation between Moe and Wall will be stark from the outset, moreso than it would have been with any other candidate.

And from the outset of his term, Moe will face significant public relations challenges. Later this month, the trial of Gerald Stanley—who stands accused of murdering young Indigenous man Colten Boushie—will have an already racially charged province on edge. After Boushie was killed, the province’s racial divide was ripped wide open, an ugly wound soothed only by the balm of Wall’s words in his plea for kindness and calm. Stanley’s trial will pick the scab off that wound once again, and Moe’s leadership will be immediately put to the test.

READ MORE: North Battleford is fighting for its future

After the Boushie trial will come the provincial budget and all the pre-release spin that goes with it. The Sask. Party has barely recovered from last year’s disastrous budget, which outraged nearly ever sector and demographic in the province and forced their government to walk back on nearly all of it. Even Wall, using classic tactics like a folksy comparison of the budget to Buckley’s cough syrup, couldn’t talk the public into buying it. And the NDP will have its own leadership contest soon, as the 2020 election begins to come into sharper focus.

But we knew Wall’s popular shoes would be nearly impossible to fill, and that Saskatchewan’s new premier would have an uphill battle to fight, regardless of who won. Moe’s leadership campaign platform contained remarkably thin gruel—virtually no new ideas or major change. That is likely the best course for him. Whether it’s the best thing for his party and province will become apparent soon enough.

CORRECTION AND CLARIFICATION (Jan. 29, 2018): A previous version of this post was unclear about live voting at the convention, as well as about the dual nature of the farmyard/truck yard from which Moe launched his campaign. A previous version of this post also referred to the federal Conservative Party as the “Progressive Conservative Party.” Maclean’s regrets the error.