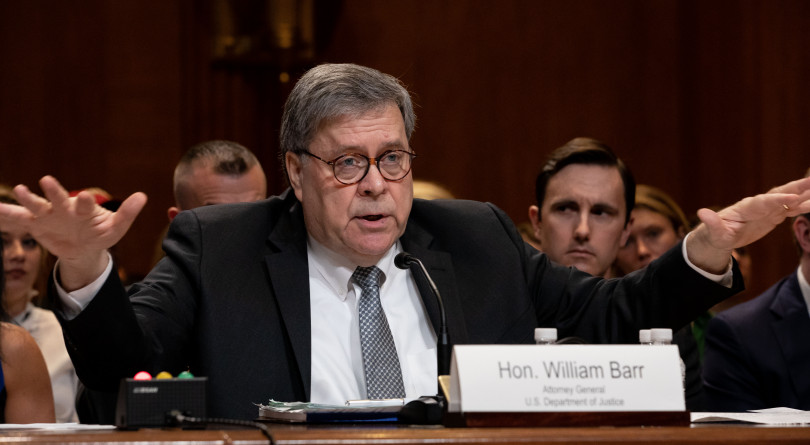 William Barr, U.S. attorney general, speaks during a House Appropriations Subcommittee hearing in Washington, D.C., U.S., on Wednesday, April 10, 2019. Barr said that he's starting his own inquiry into counterintelligence decisions that may have amounted to political "spying," including actions taken during the probe of the Trump campaign in 2016. Photographer: Anna Moneymaker/Bloomberg via Getty Images

I haven’t mentioned it before, because it seemed like a private matter. But given what happened at the Senate Judiciary Committee on Wednesday, I feel compelled to document this for the record; I’ve been in a book club with U.S. Attorney General William P. Barr for some time now. Having heard his testimony related to special counsel Robert Mueller’s report on Russian meddling in the U.S. election—and whether President Donald Trump was a party to it—I’ve come to believe that my book club experience with Bill is relevant to the issues of the day. And so, I’m just going to—as we say at Book Club—share my thoughts.

First of all I won’t deny that, listening to that hearing, I felt solidarity with Senator Richard Blumenthal. The senator focused on a letter written by Mueller that complained Bill’s summary of the special counsel’s report was inaccurate and misleading. But Bill said the special prosecutor was merely distressed by the way the press was presenting the report. So Blumenthal had some questions.

In his letter Mueller expressed alarm that Bill’s cherry-picked précis of the long-awaited findings “did not fully capture the context, nature, and substance of this Office’s work and conclusions” and that “This threatens to undermine a central purpose for which the department appointed the special counsel: to assure full public confidence in the outcome of the investigations.” Bill’s summary was presented 25 days before the redacted report, long enough to incubate a chicken, or public opinion.

Blumenthal pointed out that Mueller’s letter did not once mention the press. I knew exactly how Blumenthal must have felt because that’s just how I felt when the Attorney General sat in Cathy’s living room last May and insisted that Herman Melville’s Moby Dick or, The Whale was the story of a “very stable genius of a sea captain’s ultimately self-actualizing quest to befriend a puffin name Kevin.”

“Kevin? What document did he even read?” I’d whispered to Lisa in the kitchen, and not for the first time. This guy seems to have some very particular reading comprehension issues, is all I’m saying.

I watched Bill being questioned extensively about Trump ordering White House counsel Don McGahn to fire Mueller back in June 2017. As McGahn put it to Mueller, Trump told him “You gotta do it. You gotta call Rod” and then Trump kept telling the counsel to fire Mueller, offering a number of highly inventive—like we’re talking Cordwainer Smith on laminated psychic mouse brain level weird here—rationalizations for the firing he so craved.

McGahn said Trump then told him to lie about the requests when the New York Times reported the incident six months later, instructing the lawyer to falsify a written record to back that lie up. And Bill’s big comeback at the hearing to all this? Wait for it. “There is evidence that the President actually thought and believed that the Times article was wrong,” indeed, there “ is evidence on the President’s side of the ledger that he actually thought it was wrong and was asking for its correction.”

To hear Bill tell it, Trump’s actions was no more “obstruction” than penning a letter to the local paper is obstruction—only Trump likes to write in fired people.

While obviously not boding well for the future of American democracy, Bill’s unique perspective on correcting the public record does go a long way towards explaining his sympathy for Walder Frey’s “polite request that Robb Stark make some minor but necessary edits” at the Red Wedding.

And there Kathy was thinking he just hadn’t read the book again.

One time, Bill told the group that Watership Down was a book about a shark. Even though everyone in the room had the book in their hands. We kept showing him the cover. “It’s got rabbits on it, Bill,” Julie said. So yes, when Bill tried to tell the assembled senators that Trump didn’t have a “corrupt motive,” that he was just frustrated by Mueller’s conflicts—which he seemed to accept as quality non-fiction—I was almost glad it wasn’t just us at the book club!

Bill ignored all the interactions involving Russians in Anna Karenina. He said it was “a book about a racehorse and a train and there’s nothing to see here.”

The President was “frustrated and angered by a sincere belief that the investigation was undermining his presidency, propelled by his political opponents, and fueled by illegal leaks” Bill said at his pre-Mueller report release press conference in part of his ongoing  attempt to absolve Trump of all the obstruction.

This may have left a lot of people confused but it sure gave some context to Bill’s take on All the President’s Men. I thought it was a bit weird that Bill would not stop referring to Attorney General, general stooge to Nixon, and eventual convicted felon, John Mitchell as “the protagonist,” except for the last few meetings on that book where he kept calling him “a tragic hero.”

For October, Sue chose the Tell-Tale Heart, because Halloween and all, and Bill demanded the group “consider the perspective, and I think the narrator’s lawyers would raise this at trial,” he said  “that when the narrator says ‘dissemble no more! I admit the deed!—tear up the planks! here, here!—It is the beating of his hideous heart!’ what he actually means is he feels the shoddy woodwork in his home is interfering with his ability to serve his country as fervently and faithfully as he desires and he would appreciate it if the kind police officers would help him with some remodeling, now that it was clear that he had been falsely accused.”

Read more: The reckoning for right-wing populists is coming

The club did Macbeth next to mix things up. I was thinking about that long month as Bill tried to convince the judiciary committee that the President was well within his rights to obstruct the investigation not just because he has the “constitutional authority” one apparently gets when one is elected to high-above-the-law, but because Trump knew for sure he was innocent.

“If the President is being falsely accused, and the evidence now suggests that the accusations against him were false….” Bill said, further establishing himself as an unreliable narrator, a point made excruciatingly clear when he stated “The White House fully cooperated with the special counsel’s investigation, providing unfettered access to campaign and White House documents, directing senior aides to testify freely….”

”And he knew they were false,” Bill continued  “and he felt that this investigation was unfair, propelled by his political opponents, and was hampering his ability to govern, that is not a corrupt motive for replacing an independent counsel”. Honestly, it was like we were all back at Allen’s place last December, that time he made us mini quiches that Bill insisted were trail mix.

“This isn’t a mysterious process,” Bill explained to us around a mouthful of Stacy’s patented double-chocolate-chunk cookies, “MacBeth knew he was destined to be King of Scotland, the three witches were very clear on this point. He knew his reign was inevitable and felt that King Duncan still being alive and on the throne was interfering with his ability to govern. If he happened to exercise his prophesied right and stab his trusting friend and liege lord to death, and I’m not saying he did, there’s no underlying regicide there! Trust men, I went to law school.”

As for all Trump’s tweets, public remarks and private exhortations to Roger Stone, Michael Flynn, Michael Cohen, Paul Manafort, and more, to remain “strong” and not “flip” these were “not obstruction,” either Bill said.

“The evidence, I think—what the president’s lawyers would say is that the president’s statements about flipping are quite clear, and express, and uniformly the same, which is by flipping, he meant succumbing to pressure on unrelated cases to lie and compose in order to get lenient treatment…it’s a discouraging flipping in that sense, it’s not obstruction.”

Now, Nicholas Pileggi’s Wiseguy, that was about a warren of rabbits, according to Bill.

Think he can’t look any worse? Bill suggested we read the new Bret Easton Ellis. True story. He had his whole presentation prepared and everything, and claimed White (a title that proves there is still some competition for the title of Biggest Tool in the Universe) totally exonerated the president! The book wasn’t even out yet!

He refused to talk about Crime and Punishment beyond saying there was technically no crime because Raskolnikov was super-duper sad at the time. Beyond that, Bill dismissed Dostoevsky’s book as a “a bit snitty,” and said “I think it was probably written by one of his staff people.”

There was poor Senator Cory Booker on Wednesday mentioning “information that would be illegal if you shared with a super PAC.”

Bill comes back with “What information was shared?”

“Polling data was shared,” says Booker, “it’s in the report. I can cite you the page.”

But Bill just says “With whom?”

Guess who didn’t read the book again? Changing the subject, deflecting guilt, that’s our Bill. One time, he said we should all be looking into “who exactly this Atticus Finch guy is working for” and then he kept calling him a “political appointee, just like Madame Bovary.”

Asked a direct question, he’d obfuscate, ask you to repeat the question, then he’d answer that question with another one.

“Do you think the early chapters are overburdened with pathetic fallacy at the expense of an interior monologue, Bill?”

“That’s not an indictable offense.”

“That’s not what I asked, Bill. Do you think the author relies too heavily on nature to establish mood.”

“We’ve established that the author found no collusion.”

“What the hell? No one is, or was ever, asking about collusion. I’m just wondering if, when every single mention about the state of sky is put together you don’t see a pattern emerging…”

“Who mentions the sky?”

“The author mentions the sky. A lot. It’s in the book. Did you even read chapter 23, Bill?”

“It’s right there Bill. It’s in the title! She’s been the viewpoint character for 200 pages…”

“I’m trying to grapple with the word ‘title,’ here…”

Bill later announced that he wouldn’t show up at all on Thursday, when he was scheduled to sit before the Democrat-controlled House judiciary committee. He claimed it was because he didn’t like the format. He would have been questioned by staff lawyers this time, not just lawmakers. That’s Bill for you, never read the book, didn’t do the homework, still knew more about it than everyone else, and always bailed when it was his turn to bring the goods.