Jane Philpott and Danyaal Raza: Medicare effectively ends as soon as a patient receives a prescription 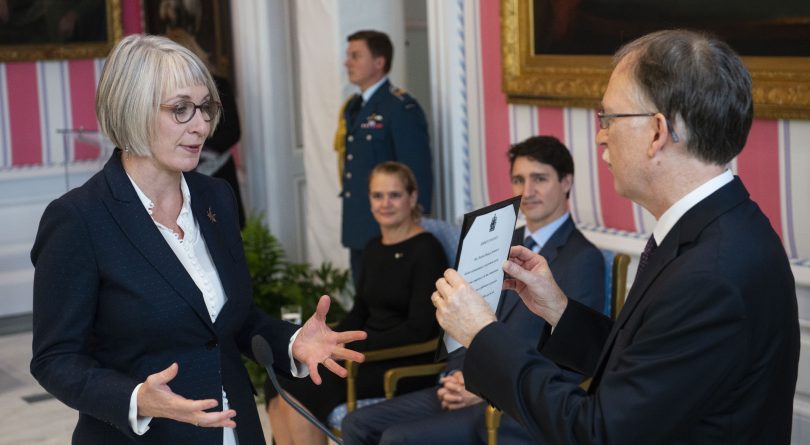 Patty Hajdu is sworn in as Minister of Health during the swearing in of the new cabinet at Rideau Hall in Ottawa on Wednesday, Nov. 20, 2019. (CP/Sean Kilpatrick)

Jane Philpott is a medical doctor and the former federal Minister of Health. Dr. Danyaal Raza is chair of Canadian Doctors for Medicare and a family physician in Toronto.

A Liberal minority government led by a prime minister with an international following. An NDP leader representing Burnaby, with an abiding interest in universal healthcare. And a combined voting bloc large enough to push any legislation through the House of Commons. No, this is not 2019, though history may repeat itself.

The scenario as described is 1966, under conditions that led to the expansion of medicare from coast to coast. The players then were Lester Pearson and Tommy Douglas. But in 2019, the scene could also describe Justin Trudeau and Jagmeet Singh. With Patty Hajdu newly appointed as Minister of Health, Trudeau has chosen someone with experience in public health and a reputation for taking on tough issues. Much like 1966, 2019 is an opportune moment for medicare.

Canada is the only high-income country in the world with a universal health care system that does not include a universal drug plan. One in 10 Canadians—approximately 3.5 million people—still have trouble filling prescriptions because of cost. Nearly a million of our fellow Canadians are cutting back on food or turning down thermostats just to pay for the prescription drugs they need.

Costs for prescription drugs not only present a serious challenge to families in Canada, but to our health care system as a whole. We pay more for drugs than Australia, New Zealand and almost every European country. Only the United States and Switzerland pay more than we do.

The reason why is no secret—our patchwork approach to coverage has failed us. Medicare effectively ends as soon as a patient receives a prescription. Depending on where they live, Canadians have access to a public plan, private drug insurance or nothing at all. This patchwork approach to coverage exposes individuals, households and businesses to significant financial risk and undermines our collective purchasing power when negotiating with drug manufacturers for fair prices.

Major commissions since the 1960s, including the Hall Commission, the National Forum on Health and the Romanow Commission have all recommended an expansion of medicare to include universal, public drug coverage. This summer, the federal Advisory Council on the Implementation of National Pharmacare, led by Ontario’s former Minister of Health, Eric Hoskins, recommended yet again the same thing: a universal drug plan.

MORE: Why we need a pharmacare plan for Canada’s chaotic world of drug prices

This proposal not only promises to improve access to medically necessary prescription drugs, but also to reduce costs. In 2017, the Parliamentary Budget Office estimated that a universal public plan would save Canadians $4.2 billion in annual prescription costs. This summer’s federal Advisory Council concurred, estimating cost saving of roughly $5 billion a year, while expanding access to all. Why has such a seemingly beneficial reform not already been enacted? As the German writer Johann Wolfgang von Goethe said, “Dream no small dreams for they have no power to move the hearts of men.” National pharmacare means overcoming the interests of those who benefit from the status quo.

With the prospect of more Canadians having access to publicly funded prescriptions, it is good news that amendments are being made to help the Patented Medicines Prices Review Board in its ability to protect consumers from high drug prices. Effective next July, the board will update the list of countries to which Canada compares our medication prices. They will also consider value for money as a factor in determining a fair drug price.

There will be new requirements to report rebates, discounts and refunds to payers, in order to increase transparency and set fair price ceilings. National pharmacare must be accompanied by good stewardship of public funds and the effect of these reforms will mean significant savings for the public purse.

Not everyone supports these moves. Catching up with the rest of the world means reducing prices and profits for pharmaceutical and insurance companies. They have an interest in maintaining the status quo. But pharmacare means more Canadians will have access to prescription medications, which offsets the effect of lower prices on the industry’s bottom line. Drawing the line will require political courage. Minister Hajdu has fought these tough battles in her previous Labour portfolio. If universal public pharmacare is to become a reality, she will need to do so again.

We are closer to a universal public drug plan in 2019 then we have ever been. If and when our federal leaders put the interests of Canadians first, this change will represent the largest expansion of medicare since The Medical Care Act of 1966.

A Douglas-Pearsonian legacy awaits. Justin Trudeau and Jagmeet Singh, with the support of a strong Minister of Health and parliamentarians across party lines, must seize the moment.