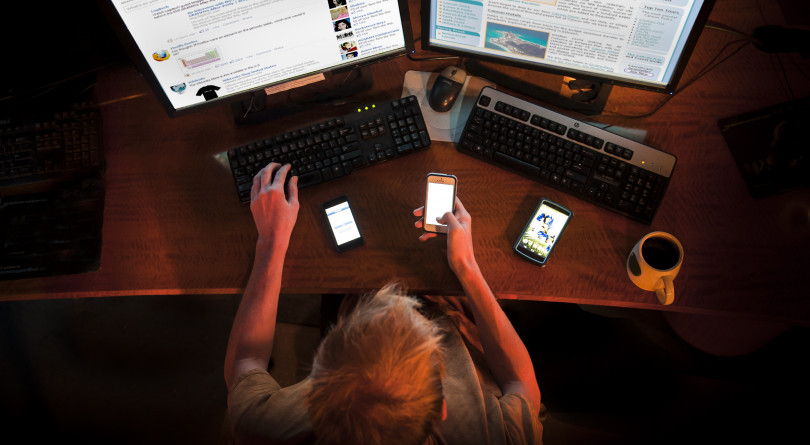 There’s never any shortage of woe to betide our world. But here’s something new to worry about—are we now suffering from an epidemic of addictions?

“The prevalence of addictions in American society seems to be on the rise, perhaps dramatically,” writes well-known Columbia University economist Jeffrey Sachs in a recent essay. Sachs, who first rose to global prominence advising Eastern European countries on the transition from communism to free markets in the early 1990s and was later director of the high-profile Earth Institute at Columbia, claims America has become “a mass-addiction society.”

As proof, he points to many popular concerns, including the devastating opioid crisis, rising levels of obesity and widespread worries about technology-related compulsions such as social media-use among younger generations. Half of all Americans, Sachs says, are now addicted in some way to something. It’s a troubling claim with equal relevance to Canada, given our own struggles with opioids, obesity and technology.

But is it true? Have we really become addicted to addictions?

Sachs makes his provocative claim as part of the 2019 World Happiness Report, an annual summary of how the world is feeling about life, which he oversees alongside University of British Columbia economist John Helliwell and British academic Richard Layard. And while it may sound light-hearted or inconsequential, happiness research—essentially survey data on self-reported well-being—is a legitimate and growing area of academic inquiry. It’s also becoming something of a political necessity, given evidence that happy voters are more likely to support incumbent governments.

The latest edition of the World Happiness Report, however, doesn’t provide much in the way of good news for North Americans. Rather it reveals a gradual but steady decline in self-perceived satisfaction. Canada’s global happiness ranking has fallen from fifth to ninth place over the past seven years while the U.S. has gone from 11th to 19th. (Finland is currently the happiest place on Earth; South Sudan, the least happy.)

Sachs argues this drop-off in self-reported happiness is attributable, in large part, to secular growth in addictive behaviour. “The U.S. is suffering from an epidemic of addictions, and these addictions are leaving a rising portion of American society unhappy and … clinically depressed,” he writes.

Claims of an observed rise in addictive behaviour certainly appear to be on solid ground with respect to opioids, on both sides of the border. According to the Centers for Disease Control, American life expectancy in the U.S. has fallen for the past three years, after decades of steady improvement, due to an ongoing spike in opioid overdoses. In Canada, the same effect has appeared at the provincial  level. According to Canada’s Chief Public Health Officer “life expectancy in British Columbia is decreasing, due to harms associated with opioids overdoses.” The drugs have killed more than 10,000 Canadians since January 2016.

READ MORE: ‘I signed up to be a mailman, to deliver Christmas cards. Not fentanyl.’

To this clear and present danger of opioids, however, Sachs eagerly adds a long list of other worrisome behaviours. This includes alcohol abuse, obesity, gambling, excessive Internet use, workaholism, exercise addiction, food addiction, shopping addiction and sex addiction to bolster his claim addictions have hit an all-time high.

And as the cause of all this, he points an accusing finger at unscrupulous drug manufacturers, flaccid government regulators, deceptive tech titans and modern marketing gurus. Food giant Kraft Heinz, for example, is accused of peddling “obesogenic” food. “Americans are being drugged, stimulated and aroused by the work of advertisers, marketers, app designers and others who know how to hook people on brands and product lines,” writes Sachs. It’s a sweeping claim backed largely by anecdotal evidence and a particular political viewpoint. Where he once promoted open markets, today Sachs rails against the role of Big Business and corporate control in creating our ‘mass-addiction society.” But surely accusations of this sort deserve more rigorous scrutiny. So what does science and history have to tell us about addictions then and now?

Much of Sachs’ evidence for an extant crisis of addictions rest on the ever-changing definition of  addiction. The ingestion of chemically-addictive substances, such as heroin and other opioids, alcohol or nicotine, cause the brain to flood itself with dopamine, a pleasurable chemical messenger. This involuntary neurobiological response causes addicts to repeatedly seek out higher and higher doses of the drug in order to trigger subsequent releases of dopamine—which results in all the unhealthy consequences typically associated with drug addictions. And quitting such drugs cold turkey can lead to severe medical emergencies; alcoholics who suddenly withdraw from drinking, for example, face a fatal risk of Delirium Tremens.

By contrast, most of the activities supporting Sachs’ claims are not drug addictions, but rather what are called non-substance addictive behaviours, or more commonly: behavioural addictions. While the excitement of gambling, risky sexual encounters, online shopping or social media use may trigger a momentary release of dopamine, the degree to which this condition persists and grows on a neurobiological basis is scientifically controversial.

Problem gambling is currently the only behavioural addiction to be listed under “non-substance-related disorders” in the latest edition of the authoritative Diagnostic and Statistical Manual of Mental Disorders (DSM-5). And while it may take considerable willpower to break long-standing or pleasurable habits, no one ever died from putting a sudden end to their video-gaming career. Regardless of degree to which the observed effects of drug and behavioural addictions may appear similar, a large part of Sachs’ claim that we’re witness to a burgeoning epidemic of addictions is entirely definitional. Having greatly expanded what is now popularly considered addictive behaviour, it should come as no surprise that our list of addictions has gotten much longer.

Stripping out the narrower range of substance-abuse addictions to determine scientifically whether long-term trends are rising or falling is tricky business, but the Toronto-based Centre for Addiction and Mental Health (CAMH) has been conducting a useful survey on this topic going back to the late 1970s. And judging from the data, it seems society is slowly weaning itself off its most common addictions. While cannabis and opioids are in obvious ascendancy, casual alcohol use, drunk driving and binge drinking all appear to be flat or in a gradual decline. Of even greater significance is the dramatic collapse of tobacco use, with the percentage of daily smokers falling from 30 per cent to 11 per cent since the late 1980s.

“Tobacco has been a major success,” says Dr. Robert Mann, a senior scientist at CAMH. “And we’ve seen reductions in drinking and driving, which is very positive.” From a comprehensive point of view, Mann notes, overall Canadian rates of substance abuse “have been fairly stable” for many years.

There is no evidence, in other words, to suggest a sudden upswing in mass substance abuse. While recent growth in opioid use remains a concern, on a population-wide basis it is dwarfed by the collapse of social smoking and the role this has played in the tremendous advances in life expectancy in Canada and the U.S. over the past several decades.

When making sweeping declarations, it also helps to have an historical perspective. Craig Heron is a history professor emeritus at York University in Toronto, and author of the book Booze: A distilled history, that examines how alcohol—by far the most common and potentially addictive drug consumed in Canada—has been used and abused over the centuries.

While reliable statistics on alcohol consumption going back centuries are again difficult to come by, Heron’s research allows him to make a few general observations. Like, for example, “people used to drink all the time.” While Ontario Premier Doug Ford has recently drawn fire for musing about allowing wine and beer consumption in public parks, long-ago drinking was an integral part of all of Canada’s daily routines, especially at work.

“When we have a coffee break, workers back [in the 1800s] would meet at 11 am for a shot of rum or whiskey,” says Heron. “And when we drink water today, they would drink beer—partly out of concern for the water supply.” Imagine everyone you see today with a plastic water bottle in their hand—a century and a half ago, that would’ve been a pint of beer. By historical standards, consumption levels today are a mere drop in the goblet compared to what they once were.

Of course those prodigious levels of consumption eventually provoked a social and political response which resulted in the Prohibition movement of the 1920s, a legal condition that lasted much longer in the U.S. than Canada. Intriguingly, Heron sees many similarities between the Temperance movement of the early 1900s and Sachs’ popular claim that society today is awash in addictions. Both, for example, seem fixated on the notion of social weakness in the face of widespread temptation. The Women’s Christian Temperance Union, a leading voice of prohibition in Canada, campaigned not only against alcohol use, but also smoking, make-up, short skirts, gambling, sex outside marriage and numerous other signs that society was straying from Christian values.

Sachs’ allegations about the prevalence of addictions seems built on a similar foundation of despair regarding individuals’ ability to resist temptation—except this time the villain is Big Business rather than the Devil. “The Temperance movement loved hyperbole,” adds Heron. “Sachs is talking in hyperbole too”

Consider also Sachs’ claim that rising levels of obesity are the result of food addictions created by unscrupulous food manufacturers. From an historical perspective, this appears to be nonsense.  Recent archaeological evidence, for example, reveals British monks in the Middle Ages consumed a shocking 6,000 calories per day; on fasting days, this fell to a still prodigious 4,500 calories. By comparison, Canada Food Guide’s currently recommends 2,200 to 2,900 calories per day for a healthy adult. The roly-poly image of Robin Hood’s friendly Friar Tuck was clearly no idle stereotype. But were these monks hooked on food by Medieval Mad Men? Or were they simply making choices—wise or foolish—based on availability and habit, as many of us do today?

Monasteries were often endowed with the best agricultural land, and the monks spent their copious amounts of spare time pursuing pastimes such as beer brewing and wine making. Modern eaters suffer from these same opportunities for indulgence; and obesity statistics tell the tale. But there is a distinction to be drawn between eating too much because there’s so much tasty, calorie-laden food on offer, and the notion we’ve all been turned into food addicts by devious corporate marketing departments.

To be sure, the recent growth in opioids abuse remains a concern for both Canada and the U.S. But Sachs’ claim that we’re suffering from an epidemic of addictions collapses under the application of scientific methods. Combined rates of serious drug addictions are either flat or in gradual decline. And the apparent rise in new technology-enabled addictive behaviours is largely a matter of definition. We now apply the word addiction indiscriminately and rather sloppily to express social disapproval for anything done to excess. “The word has lost its meaning,” says historian Heron. “Today addiction is just an easy way to say people are doing too much of the same thing over and over again,” he adds.

Returning to his comparison of the moral admonition inherent to Prohibition and Sachs’ current panic over an addiction in every house, Heron offers a welcome note of optimism to this tale of compulsion. “The notion that we’re now worse off than we’ve ever been at any other time is a recurring theme in history,” he says. “And most of it is exaggerated.”