Not your mother's wage gap: How millennials experience pay inequality

Opinion: As the economy evolves, young Canadian women—raised to believe they can do anything—are facing new challenges 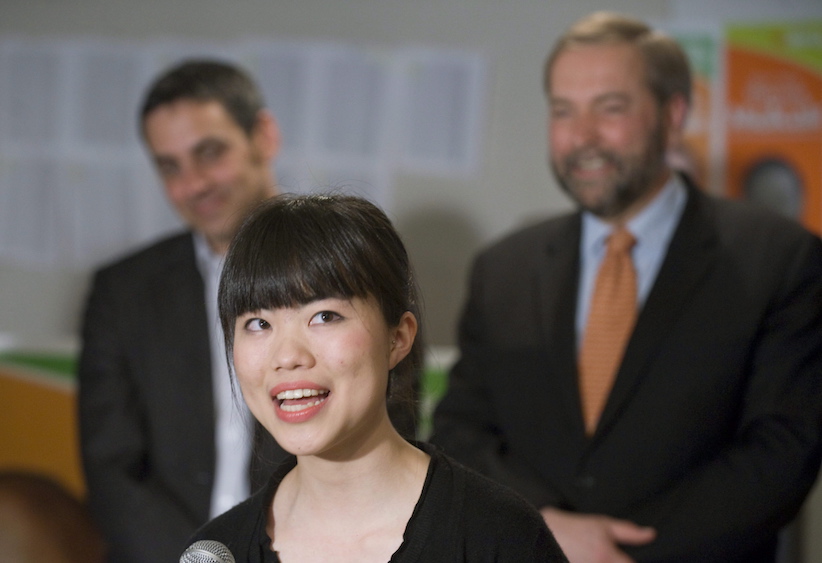 Laurin Liu was an NDP member of Parliament representing the riding of Rivière-des-Mille-Îles between 2011 and 2015. She is the youngest female member of Parliament elected in Canadian history and recently completed a MSc in Human Rights at the London School of Economics. In 2014, she tabled Bill C-636 to end the exploitation of unpaid interns in Canada.

“You’re going to be the Governor General of Canada one day,” my high-school english-literature teacher said to me once as he handed me back a graded essay. I was 13, and I beamed back. I had no reason not to believe him (although why he settled on Governor General remains unclear to this day). I was a bright student, after all, and like many girls my age, I grew up being told that I could be anything I wanted to be.

Tell girls today that they can be astronauts, or doctors, or university professors, and the implication that they can do anything a boy can do is often lost on them. Many have the benefit of being largely unaware that boys have always had a leg up, and millennial women were perhaps the first generation to grow up with this new mindset. As a result, we obtained college degrees at higher numbers than our male counterparts and entered the workforce in growing numbers. But once we begin our working lives, we’re left with the bitter impression that we’ve been sold a bill of goods.

I considered myself a feminist in college, but I didn’t truly grasp how gender equality, or lack thereof, would be such a force in my personal life until I was elected to a Parliament in which only one in four MPs were women, a ratio that holds true today. In recent months, as #MeToo has shone a light on sexual harassment in the workplace, it has concurrently made us more aware of the gender and power imbalances that define many work environments. The fact that men are frequently paid more than equally qualified women is a reflection of this. For many of us, workplace sexism still comes as a sudden and shocking realization.

As we have been having conversations about how workplace sexual harassment and assault affects the careers of women, the question of the pay gap has also become salient. The loudest and many of the first of those who have said #MeToo were women who had the means and the social capital to speak up: many were white, wealthy, and famous. Similarly, stories on pay equality that have made headlines recently tend to be about elite professional women, including Jill Abramson—the former executive editor of the New York Times, who was reportedly fired after comparing her salary to that of her male predecessors—and Michelle Williams, who was paid less than $1,000 to reshoot Ridley Scott’s film All The Money In The World, while her co-star, Mark Wahlberg, was paid $1.5 million.

Some of these stories have also shown us how to intervene as bystanders when we see wage discrimination in action. It helps to have someone in your corner: a Shonda Rhimes to Ellen Pompeo, a Jessica Chastain to Octavia Spencer. And if Hollywood is any indication, the social marker is slowly moving in the direction of support for pay equity: see Wahlberg’s pledge to donate the $1.5 million he was paid to a legal fund for sexual abuse and harassment victims.

Because we’re armed with ambition, millennials want to have tools at our disposal to push back against the wage gap. And so advice columns and ten-point lists have abounded in the genre of modern self-help for young, female, middle-class professionals, epitomized by Sheryl Sandberg’s simple mantra: Lean in. “Three Simple Ways for Women to Rethink Office Politics and Wield More Influence at Work.” “The Five Types Of Impostor Syndrome And How To Beat Them.” “Three Tips For Women Negotiating A Raise.”

This buffet of advice is all the more appealing because working for the same employer from graduation until retirement is no longer de rigueur in the gig economy we’ve inherited. And when people change employers every few years, those who excel at being their own agents and advocates in the workforce have a distinct advantage. But is the problem truly that we’re not savvy enough to know our own worth? That we don’t know that the men we work with are making more? That we never learned how to be the right kind of assertive?

There is nothing wrong with the abundance of career pointers given to women, on first blush. If anything, it’s a reflection of the real desire of women to get ahead in the workplace and a democratization of professional advice that used to be kept in closed circles. But this empowerment literature aimed at my generation can often serve as a placebo for a problem that is one of workplace culture, rather than a lack of individual initiative. Studies have shown that “gender inequality is due to bias, not differences in behaviour.” In the end, no amount of individual empowerment discourse will save us. Today, as for generations past, systemic solutions such as effective income equality and equity legislation remains crucial, as does the ability for labour unions to retain their negotiating power and ability to defend equal pay for their female members.

But current solutions to the pay gap also have to address rising inequality, as livelihoods become increasingly dependent on freelancing, contracting, temping or outsourcing, in a corporate race to reduce human resource expenditures. Western economies are being restructured, as the largest employers are no longer in the business of making and selling things, but in the business of renting workers. The fact that employers eschew many responsibilities associated with a traditional employer-employee relationship means that any temp or contract worker who refuses to play by these rules can easily be replaced. The first to fall off the deep end of this power imbalance between employers and a young workforce tend to be women, who have always been over-represented in temporary and precarious work.

Moreover, because employers are less and less willing to pay new hires to acquire skills on the job, millennials entering the workforce often take on internships, many of which are unpaid. There are indications that the majority of these are women, and evidence shows that being underpaid as an entry-level professional can have impacts on pay prospects years later. Caught in an era of post-industrial capitalism that exploits precarious and unpaid work at increasing rates, the message being sent to women from the beginning of their careers that their work will be undervalued and undercompensated.

In the end, what separates millennial women from our mothers is a thin line. We find ourselves hitting a glass ceiling that has shifted throughout previous generations, but remains firmly in place. However, millennials were also raised on the principles of meritocracy and the mythos of advancement stemming from ambition and hard work. We want more, because full equality is what we were promised—and we’re not afraid to get angry.