Andrew MacDougall: With the Trudeau Liberals reduced to a minority, the opposition parties must use their newfound leverage to demand a judicial inquiry into the affair 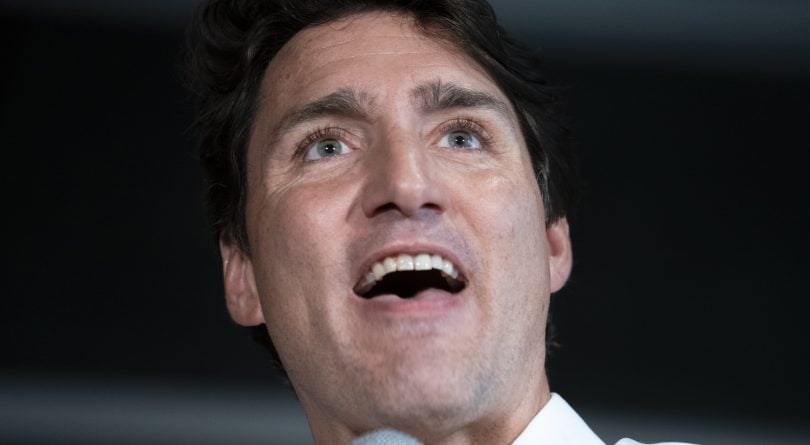 A defiant Trudeau delivering remarks in August at a nomination meeting for a Liberal candidate in Montreal, shortly after the release of a scathing ethics report on Trudeau's handling of the SNC-Lavalin affair (Paul Chiasson/CP)

On an election night short of silver linings, Jody Wilson-Raybould’s re-election to Parliament as the Independent MP for the riding of Vancouver-Granville was the notable exception. While the main parties scratched out a collective loss, the person who did the most to hold Justin Trudeau to account for his intrusion into the criminal justice system in the SNC-Lavalin affair was rewarded for her integrity. Wilson-Raybould’s triumph is a positive signal in these craven times.

That Canada’s politics is overly centralized and reliant on the leader is, by now, beyond dispute. To wit: public administration guru Donald Savoie has just released his 842nd book (an estimate) on the subject. However, the Prime Minister’s power has now been taken into another dimension by Trudeau, who is a megabrand more than he is a legislator or leader of people(kind). L’état might not be Trudeau (yet), but le Parti Libéral is certainly his from top to bottom. And let’s just say it breeds a little ego.

The girth of Trudeau’s ego—and the rank incivility of Canada’s 43rd federal election, for that matter—was rammed home in the wee hours of the morning as Trudeau big-footed Andrew Scheer’s concession speech mere minutes after the Conservative leader had gone out to explain to Tories how he pooched a golden opportunity to send the Kokanee-groping, Aga Khan-private-island-vacationing, (repeat) ethics law-breaking, blackface-wearing Prime Minister packing. Trudeau’s speechus interruptus demonstrated a complete lack of class from someone whose vote share dropped nearly six and a-half percentage points and who was lucky to snatch a plurality of seats from the jaws of defeat.

Even worse, the comfortable size of Trudeau’s minority is likely to embolden the Prime Minister to push on as before, without a thought to his diminished circumstance. Indeed, the tone of Trudeau’s “victory” speech was remarkable un-conciliatory. Sure, he said the right words about bringing people together, but with a reconstituted Bloc Québécois and some very angry folks out west, it’s going to be hard for Trudeau to convince anyone of his sincerity. If he didn’t pull people together in good times, what are the chances he’ll manage the trick in the bad? Instead, Trudeau will likely be counting on a cash-strapped and electorally diminished NDP to see him through any early tests of confidence in the House of Commons.

To inject some humility into Trudeau’s proceedings, the NDP—and indeed any party in Parliament—should insist on one thing as a condition of their support of the government’s inaugural Throne Speech: a judicial inquiry into the SNC-Lavalin affair. It might have been Scheer’s idea on the campaign trail but it should become everyone’s policy now.

An inquiry wouldn’t, despite the inevitable Liberal criticisms, be an act of sour grapes. It would be a necessary corrective to the secrecy the Prime Minister continues to enforce on a matter in which he claims he’s done nothing wrong. Trudeau cannot be allowed govern with a cloud of potential illegality over his head and so, Prime Minister: it’s time to walk the walk. Now that you’re safely back in the saddle (ish) Canadians deserve to know the full story on SNC-Lavalin.

RELATED: SNC-Lavalin may not be a ballot box winner for Scheer

Lest we forget, the Prime Minister hasn’t been truthful on SNC. Not once. First Trudeau derided the original Globe and Mail story as “false.” Then top advisors were sent to a parliamentary committee to spin a story the ethics commissioner later found contained significant flaws when he conducted his damning investigation. We also know the ethics commissioner didn’t have access to all of the people he wanted to speak with to elucidate the truth. The RCMP then ran into the same wall of silence on the eve of the election. And despite her win, Wilson-Raybould remains gagged. What is Trudeau so desperate to hide?

It’s time to find out.

The raw politics also happen to be good on the inquiry, even if it is also the right thing to do. Any sanction of Trudeau would clear the Liberal Party of its prime asset and open up new lanes from the NDP, Greens, and Conservatives. Who knows? Freed of their bugbear the Conservatives might even be free to tack to the market on climate change. Okay, fine, any inquiry wouldn’t be that powerful. But it still needs to happen.

So, buck up Jagmeet. Stand tall, Andrew. Enlighten us, Elizabeth. Hell, take your chance to roast a Trudeau, Yves-François. Insist on the inquiry. I’m pretty sure the MP for Vancouver Granville will support you if you do.

And if Trudeau doesn’t want to cooperate there’s another silver lining: the government no longer controls the Justice or Ethics Committees in Parliament. An investigation is there to be had.