Oh wise and wonderful Trump, help us stop the coronavirus

If you can’t reason with the U.S. president, the best way to end this pandemic might be to do the one thing known to work—play to his vanity 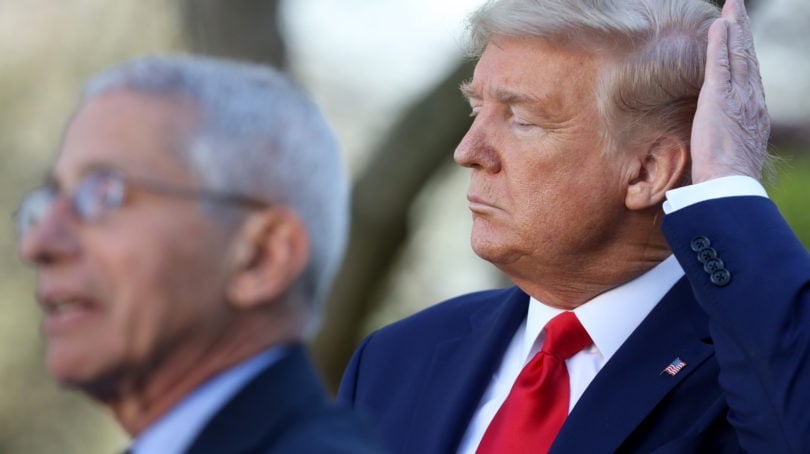 Trump attends the daily coronavirus briefing at the Rose Garden of the White House on March 30, 2020, in Washington, DC (Win McNamee/Getty Images)

How do you solve a problem like Donald Trump?

Pockets of the United States of America are now in Year Four of that particular drama, even if the first season of Survivor: Coronavirus is only in its debut season.

No one has—as yet—been able to neutralize Trump’s ‘tremendous’ earned-media ability. Even if Trump is lighting himself on fire, it’s that blazing fire that becomes the subject of (angry) debate, not the issue to hand. And it works every time.

So what if the secret to neutralizing Trump is being Trump? Or, short of being Trump, playing his game? Not by aping Trump’s worst instincts, but by appealing to the worst devils of his nature.

Playing Trump’s game would be to enter a hellscape, for sure. Any man who brags about his television ratings in the midst of a crisis as dire and sweeping as the coronavirus is suffering from a nasty pathology. Any so-called leader who is willing to shut out fellow leaders from receiving needed medical supplies unless they’re being ‘nice’ to him—as Trump hinted at this week—is a morals-free zone. What could possibly be gained from slumming with Trump?

Well, results for one. The name of the coronavirus game right now is getting the federal government in motion and delivering, full stop. Lives depend on it. And if that takes a bit of Trump-like showmanship to deliver it then that is the price to be paid. A hundred times over.

Trump craves one thing: adulation. Everybody knows it. The ‘Pillow Guy’ in the Rose Garden certainly gets it. At this point in the coronavirus drama it is incumbent on all Americans to give him that adulation in order to stop him from allowing the virus to spread any further than it already has. Forget social distancing; in this time of crisis Americans need to ram their noses up Trump’s backside.

Instead of governors berating Trump for not sending through enough ventilators, or a hospital ship, they should offer to put Trump on the hospital ship with the ventilators and a large press pack. Every single American business leader with a coronavirus-fighting idea should give it to the President for him to announce on the grandest stage they can produce, no expenses spared. Every celebrity with a hatred for Trump needs to instead pull a Kanye and go all-in on some Trump ego fluffing.

While we’re at it, let’s rename the Grammy’s the Trumpies. Let’s stick the word ‘Trump’ on the top of every tall building in every major American city. Forget ‘super’, it’s now the ‘Trump Bowl’. And let’s rename every news organization ‘Trump News’. Whatever it takes.

In other words, everybody needs to pull together and make Donald Trump the greatest, biggest, most tremendous and wonderful president/star the world has ever seen and praise him to the point of vomit for all of the wonderful things he is doing to lead the country. And they should do it every single day. Indeed, all 50 States need to begin competing with each other—not for medical gear—but over who can be the most obsequious in their praise of Trump.

Would these class traitors get some media stick for it? No doubt. One can already see the talking heads on MSNBC and CNN exploding. But what are a few busted melons when hundreds of thousands of regular Joe melons are on the chopping block in the current universe? As the noted pugilist Ted DiBiase once said: “pay the man”.

And while our names might not all be Virgil, we do all have some skin in the game. Right now a large part of the world’s coronavirus response depends on Donald Trump getting it right, and so we must in turn do what’s right to ensure that outcome.

This strategy isn’t all upside. There is a risk that Trump’s reelection prospects would be boosted by incessantly kissing his bum. But his approvals are already up, even with the dumpster fire response currently being delivered. If Trump is to persist, the least we could do is ensure more of us persist along with him.