On climate change, there aren't 'two sides.' So why do some feel otherwise?

Opinion: The top predictor of what people think about climate change has little to do with scientific literacy—it's about politics. Here's how to change that. 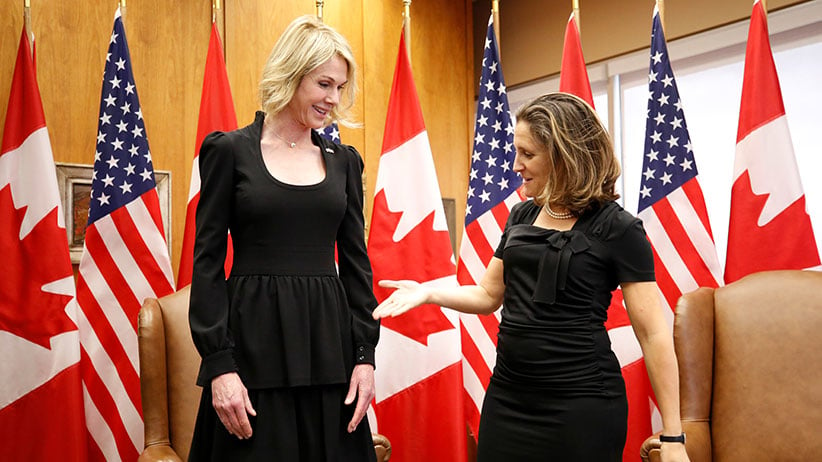 Katharine Hayhoe is an atmospheric scientist and professor at Texas Tech University.

“Do you believe in climate change?”

Kelly Knight Craft, the newly minted U.S. ambassador to Canada, did not take long after arriving in Ottawa to make waves. The same day she presented her credentials to Canada’s Governor General Julie Payette, she sat down for an interview with a CBC journalist where she was asked this question.

“I think that both sides have their own results, from their studies, and I appreciate and I respect both sides of the science,” she replied. Her alarming answer paid lip service to the toxic myth that there is a legitimate debate over the reality of climate change, and that both sides deserve equal consideration—as if there were “two sides” to gravity, and whether we fall or float when we step off the cliff somehow depends on our perspective, our opinion, and our politics rather than on the facts.

This past week, the U.S. federal government released a comprehensive new climate science report that leaves no room for doubt regarding the reality and severity of human-induced climate change. The report, which I co-authored, discusses how new, emerging research finds that many changes are happening faster or are more widespread than we previously thought. It concludes that the further we push the earth’s climate away from its natural state, the greater the risks of dangerous and even unforeseen consequences. At the same time, however, the core findings of the report are nothing new. We’ve known for decades that the climate is changing, humans are responsible, and the risks to our civilization are real.

The irony is inescapable. As the world converges in Bonn for the latest round of climate negotiations at COP23, the most up-to-date summary of climate science in the world was just released by the same government that has, now that Syria has finally joined, become the only one on the entire planet to reject the Paris Agreement.

How is such dissonance possible?

A thermometer doesn’t give us a different number depending on how we vote. But today, how we vote does predict what we think the thermometer says—and whether our recent rash of devastating extremes, from wildfires and floods to hurricanes and droughts, have anything to do with a changing climate.

In the United States, climate change is now one of the most politically polarized topics in the country, neck and neck with gun control and immigration. The number one predictor of what people think about climate change—Is it real? Are humans causing it? And are the risks serious?—has little to do with scientific literacy, and everything to do with political ideology. So for a Republican megadonor like Craft, who hails from Kentucky and is the wife of the billionaire CEO of one of the largest coal companies in the U.S., her suggestion that there is merit to “both sides” was likely intended to be more conciliatory than inflammatory.

That’s just the U.S., you may be thinking. But this dangerous polarization is spreading across the border, thanks to messengers like Craft—and the media we rely on for our news. Nationwide in the U.S., 53 per cent of people agree that humans are causing the climate to change. Where do we stand in Canada? At 61 per cent, according to Yale’s 2016 Climate Opinion Maps. That’s not so great, either: because, regardless of where we live, the same reality applies to us all.

So what will it take to change people’s minds? Not another climate science report, that’s for sure. We’ve known for over 150 years that burning coal, gas, and oil produces heat-trapping gases. The warming of the earth is evident: not just from thermometers and satellite records, but from what’s happening in our own backyards. It’s been more than 50 years since scientists formally warned a U.S. president of the dangers of a changing climate, and if we stacked up all the assessments and reports that have been published over the last few decades, they’d reach the roof of a two-storey house.

Drawing lines in the sand isn’t going to do it, either. As a scientist whose personal expertise is attacked on a daily basis, I understand our Governor General’s frustration, expressed in her speech to the Canadian Science Policy Convention on Nov. 1, with those who dismiss centuries’ worth of meticulous science. But if we truly desire to find ways we can work together to solve this pressing issue, ridiculing those who aren’t on board with the science is not an effective tactic.

The way forward begins with understanding the real problem. And despite the science-y sounding objections we hear every day—“it’s just a natural cycle!” or “those models are always wrong!”—the core issue is not rejection of science. If we truly reject the science we use to study and model climate, then we would also reject our fridges, our stoves, and our airplanes, because they are based on the very same principles of radiative transfer and non-linear fluid dynamics.

The core issue is not our spiritual beliefs, either, despite religious-y sounding objections some trot out like, “God is in control, and would never let this happen!” More than 35 per cent of scientists at top U.S. research universities believe there is a God. I count myself among their number and know of many more, from evolutionary biologists to cosmologists.

No, the real problem isn’t that we reject the science or replace it with our faith: it’s that we aren’t convinced the impacts are serious and the solutions are plausible. So how can we tackle this problem?

The first step is to connect the dots between global change and what it means for us right now, right here, in the places where we live. We’re seeing trees and flowers blooming earlier in the year, invasive species and pests from kudzu to Lyme disease spreading north of the border, and stronger summer heat waves and heavy rainfall events. How does climate change affect my health, and that of my family? Our economy and our natural resources? Others less fortunate than us—both here and abroad—who find themselves forced from their homes by famine, drought, flood, and political instability that are exacerbated by a changing climate? Climate change is happening here and now, and it matters to all of us because it affects us.

The second step is to recognize that the solutions are also at hand here and now, too. Oil capitals of the world, from Texas to Saudi Arabia, are positioning themselves to be new leaders in the new clean energy economy. China met its 2020 clean energy goals three years early, and are investing an additional $360 billion USD in what is already the largest wind and solar sector in the world. Developing countries and emerging economies are moving to the fore, with India breaking records for low solar energy prices, and pay-as-you-go solar poised to revolutionize the lives of hundreds of millions without energy in sub-Saharan Africa.

It’s not the science of climate change that we must emphasize to prevent “dangerous human interference with the climate system.” It’s the immediacy of its impacts, and the hope its solutions offer for a better future for us all.