One thing worth salvaging from the G7 summit meltdown

Terry Glavin: Donald Trump and various intrigues will dominate the summit. What still deserves attention is the $1.3 billion plea to invest in women's health and education. 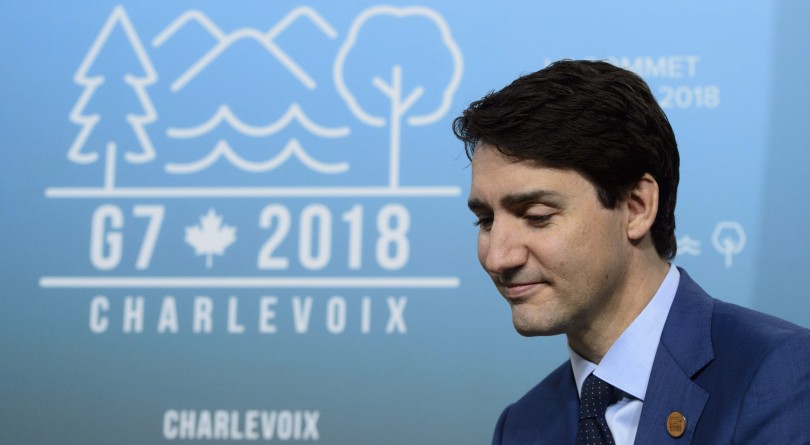 It’s chump change. The begging-bowl scale of the $1.3 billion plea that a coalition of aid, development and women’s organizations want Prime Minister Justin Trudeau to cadge from the G7 summit opening today in Charlevoix, Que., is, if anything, a marker of just how low everybody’s expectations of the G7 have sunk.

Even more embarrassing, it’s the most ambitious thing the summit is likely to accomplish.

Centred around the teenaged Nobel Prize winner, girls’ education campaigner and honorary Canadian citizen Malala Yousafzai, the coalition has been specifically asking Trudeau to put $500 million in Canadian money where his famously feminist mouth is, and Canada could do that without breaking a sweat. With Canada holding the G7 presidency this year, Trudeau could have cancelled the absurdly extravagant diplopalooza in the scenic resort town of La Malbaie altogether, reallocated the $600-million-plus in cost savings to meet the Malala Fund request in its entirety, and we’d still have $100 million and change left over.

Instead, La Malbaie is being turned into an armed camp. Roughly 3,000 Mounties and other police force personnel have been flown in from around the country. Owing to security concerns arising from the ritualistic anti-capitalist mischief spectacles attending to these affairs, the Quebec legislature, 140 kilometres away in Quebec City, is shutting down for an unscheduled long weekend holiday.

All the rooms in the luxurious Fairmont Manoir Richelieu in La Malbaie have been reserved to accommodate the summiteers. The town has been given over to traipsing battalions of bureaucrats, technocrats, Eurocrats (the European Union is “nonenumerated member”), ministers, deputy ministers, sherpas and sous-sherpas. And almost as an afterthought, the elected leaders of the United Kingdom, Italy, France, Germany, Japan and the United States will be there too. Cirque du Soleil has been booked to provide the entertainment.

U.S. President Donald Trump, having already bailed on the 194-country Paris climate accord, and having abandoned former president Barack Obama’s dubious-to-begin-with multilateral Iran nuclear deal, has lately decided that it would be clever to break with modern history and invoke a “national security” pretext to hoist tariffs on steel and aluminum imports from Canada, Mexico and the European Union. Consequently, French President Emmanuel Macron is said to be coming to La Malbaie determined to enlist his G7 counterparts in giving Trump a proper thrashing.

READ MORE: The G7 question: How do we America-Proof the West?

So there will be all that and quite few more intrigues to occupy everyone’s attention. Less notice will be given to the complex “Make Gender Equality History” agenda set out by the members of the G7 Gender Equality Advisory Committee, who are to have breakfast with the G7 leaders on Saturday morning. At the risk of doing the committee’s deliberations a disservice, you could say it has laid out an elaborate and ambitiously feminist domestic and foreign policy blueprint of the type the Trudeau government would claim to embrace, except the project is intended to be taken up throughout the G7.

Canada has already committed $650 million in foreign aid spending on women’s reproductive health, above and beyond annual commitments to former prime minister Stephen Harper’s Muskoka Initiative, launched at a previous Canadian-hosted summit, in 2010. While failing to address reproductive health—access to contraceptives and abortion services—the Moskoka project nevertheless went some useful distance to reduce infant mortality and improve maternal health worldwide. The Harper government spent more than $6 billion on the initiative, which will have run its course by 2020.

But now that the Rolling Stone magazine idol Justin Trudeau is Canada’s prime minister, expectations have been raised. So let’s say the G7 agrees to pledge that hoped-for $1.3 billion over three years and Trudeau comes up with $500 million of it as a token of his feminist leadership, making amends in the bargain with Bono, the Irish rock star and notable Trudeau admirer who has lately wondered out loud about the authenticity of Trudeau’s feminist credentials. And let’s say this is the only thing of substance the G7 summit produces.

It’s not like the money would be wasted. It’s no small thing that Trudeau’s government is spending $30 million a year to assist Canadian women’s organizations that are devoted to advancing women’s rights in poorer countries. In the global struggle for the emancipation of women, the front lines are not in corporate boardroom gender-parity initiatives or networking salons of the kind championed by Ivanka Trump. The front lines are in the poorer countries, where gender parity in primary and secondary education is skewed abysmally against women. The World Bank counts 130 million girls worldwide who aren’t in school at all. In the G7 countries, women share in about half the Gross Domestic Product. In the Arab countries, for instance, the women’s share of the GDP is 31 per cent.

In Egypt, a married women cannot leave the house, except for purposes explicitly allowed by law or custom, without her husband’s permission. Saudi Arabia is only now amending its laws to allow women to drive cars. In the so-called Muslim world, 65 per cent of women can’t read or write, compared to 40 per cent of men, but women’s inequality is by no means confined to Muslim-majority countries. The World Bank counts 104 countries that specifically prohibit women from holding certain jobs. Nor is the emancipation of women the slow but inexorably forward-moving global phenomenon that those of us in the G7 countries are familiar with. Some countries are moving backwards, fast.

A Human Rights Watch study released in April found that the labour force participation of women in China fell from 83 per cent in 2007 to 63 per cent in 2017. The World Economic Forum cut China’s gender-parity ranking last year for the ninth year in a row, to 100th place out of 144 countries, down from 57th place a decade ago. Nearly one in five of China’s recent national civil service job postings specified men only, men preferred or “suitable for men.”

Last June, in her agenda-setting foreign policy speech in the House of Commons, Foreign Affairs Minister Chrystia Freeland quite properly described the peace and prosperity Canada has enjoyed over the past 70 years as the inheritance of a rules-based international order that is now fraying horribly. The G7, even if it gets pared back to a “G6 plus 1” owing to President Trump’s dangerous eccentricities, may be the only forum left where the world’s economically advanced democracies might make some collaborative use of themselves in defending that inheritance, and extending its advantages.

The United States is well along in its retreat from global leadership—a trend that began long before Trump came along. The North Atlantic Treaty Organization is teetering, and it doesn’t help that the Turkish police state remains a NATO member in good standing. The World Trade Organization looked the other way while China subverted its rules. The UN Security Council has been taken hostage by Russia and China. Without the scale of American funding it has become accustomed to receiving, even the World Health Organization is scrambling to finance its health emergencies program.

Perhaps it’s unfortunate that the G7 agenda is not focused on, say, a robust and unified strategy to contain and waylay the gangster and war criminal Vladimir Putin, or to halt the advance of the gruesome authoritarian encroachments undermining the global rules-based order from Hungary to the Philippines. But if all the G7 is capable of doing is investing in women’s health and education, then that will have to do.

The empowerment of women is, after all, the surest way to achieve global peace and prosperity, and the most reliable defence, in the long run, against poverty and instability. If Justin Trudeau is to lead that charge in some small way at the G7, then at least let’s hope he means it, and let’s wish him well.