Tom Parkin: The emerging issue of the election is affordability of everyday life. And with the Liberals sinking, we may see an epic right-left battle. 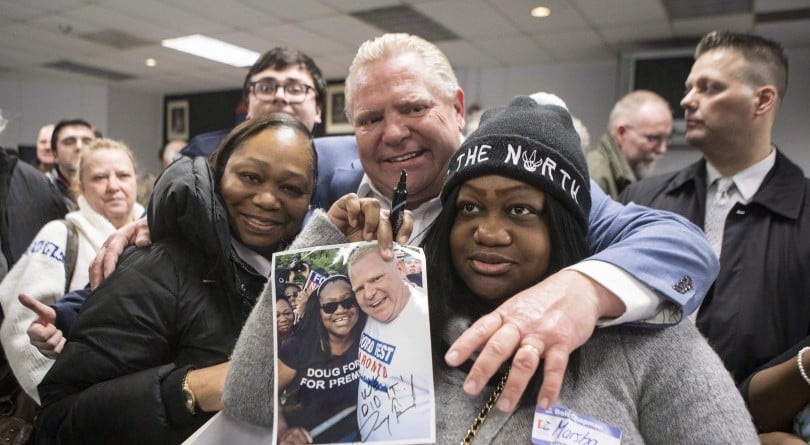 An expanding working class may have dealt the final blow to the Kathleen Wynne Liberals, whose support has now become concentrated among upper class Ontarians and a shrinking middle class.

For now, Doug Ford’s PCs hold a strong hand with working class voters—nearly double the support of either the Liberals or NDP. If Ford can sustain his working class support until June 7, he will sweep to a majority government.

So far, the lone card back is NDP Leader Andrea Horwath, who needs to make an impact with working class voters if she is to block a Ford majority.

That’s the read on a trove of data from EKOS Research, including a survey released last week. EKOS’ polls ask Ontarians to place themselves in one of four classes: poor, working, middle and upper.

EKOS’ most recent results show the Wynne Liberals lead only among upper class Ontarians. Support drops by half with working class voters then by a third among poor voters. Liberals may not know it—and probably don’t understand why— but they are the party of class privilege.

And in this economy, that’s a shrinking electoral segment.

READ MORE: A double-double of cynicism in Ontario

The number of poor and working class voters is now almost as large as the middle class. EKOS Research CEO Frank Graves believes the class profile of Ontario closely resembles the national results.

And Graves’ research points at a clear reason for middle class collapse—the destruction of economic security.

Being able to retire with a secure income is the top marker of middle class membership, say 70 per cent of Canadians. Close behind are a secure job and financial security, both considered important aspects by 68 per cent.

So, as companies have moved toward contract employment with no benefits or pensions—and certainly no unions—millions have fallen out of the middle class. Or perhaps even out of the working class.

And at the same time, there’s been as massive run-up in the cost of rents, housing, child care, car insurance, electricity and tuition—costs the Liberals either ignored or caused. Those higher costs might be manageable for more affluent voters who own stocks and real estate, which have also boomed over the past decade. But for those without wealth to fall back on, the solution has been debt.

Sure, Ford’s hysteria over government debt can be useful in justifying cuts and privatization. But by far the greater risk to individuals, social stability and the economy is household debt. A recent report from the Bank of Internal Settlement says Canadians’ debt levels are “flashing red.”

And now, with interest rates heading up, higher debt payments will add to the crush of everyday costs. Maxed-out borrowers will be looking to protect themselves from falling to the next rung on the class ladder.

And so for this Ontario election, a central issue (if we can move past incantations about how terrible the Wynne Liberals were) will likely be the affordability of everyday life for working class people. And on that issue we might be about to see an epic right-left battle.

On one hand, Doug Ford will offer his vision of small government, low taxes and free markets uber alles. The talking heads on pundit shows will be practically snapping their necks in nodding agreement about how tax cuts for themselves will trickle down to others.

But mostly, Ford will offer distraction. He complains about elites and fat cats, although he comes from inherited wealth. He’s said working people need a pay raise, although he’ll freeze the minimum wage. He’s said he’ll fire the $6 million a year CEO of Hydro One, although Hydro One is now a private company. And don’t mark these down to stupidity—it’s manipulation.

What Ford is unlikely to offer are ways to reduce everyday costs. He definitely won’t explain who will pay for his promises. He won’t say whose services he will cut and privatize.

Horwath’s answer is to build new models of security to replace the ones once supplied through a job and union benefits. In an economy in which fewer workers have benefits, the NDP leader is pitching new dental and drug plans. Because now workers have little bargaining power, she supports minimum wage increases and better leave provisions.

Horwath is also likely to put forward a child care plan that will save parents thousands of dollars. She has a tuition grant plan to tackle student debt. She’s promised rent control. It is a classic social democratic pitch.

Some of her ideas, like child care and pharmacare, will save money by using public co-ordination—just as Canada’s public health care is less expensive than the U.S. private system. But others will simply require more funding—and reversing the decades-long policy of more tax cuts for corporations and high incomes.

Dollar for dollar, Horwath will no doubt deliver more security to insecure Ontarians. But it remains to be seen whether economic self-interest will be more powerful than the bamboozlement of the Ford crazy train.

And, as the working class dynamics become clear, middle and upper class Liberals may yet decide to come to the table. But the dice might be loaded. It’s easy to figure out the value of a tax cut today. But it’s hard to know what social stability is worth until it’s gone.