Andrew MacDougall: To flip a losing script, the Conservatives should do the hard yards of defending the principles liberals used to hold dear 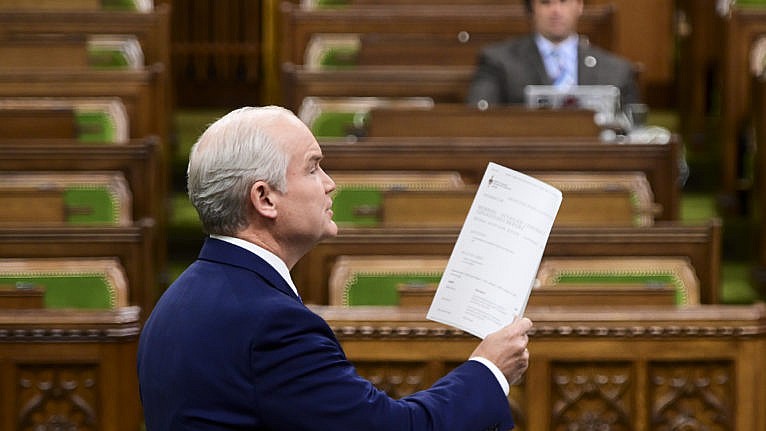 O'Toole rises during question period in the House of Commons on June 22, 2021 (Sean Kilpatrick/CP)

If you’ve any doubt being Leader of the Official Opposition is the worst job going in politics, take a look at Erin O’Toole and ask yourself if you’d like to be having his fun. With an election in the offing, his Conservatives are now mired in the mid-20s in the most recent clutch of polls, an outcome that would deliver the worst result for a Conservative Party of Canada since its inception in 2003. Welcome to Sucksville, population O’Toole.

What’s going on? What’s happening to the supposedly rock-solid 30 per cent of Canadians who vote Tory, the base that’s stuck with the Conservative Party since it spun out of government in 2015?

The simplest answer is they don’t like what they see from Team O’Toole. Despite his pledge to be ‘true blue’, O’Toole has now reversed a decade and a half of party orthodoxy and put his arms around the carbon tax, opening himself up to the dreaded charge of being ‘Liberal-lite’. He’s also rehearsed an Ed Broadbent-like pitch to the forgotten working class, leaving himself somewhere in the middle of the road and in danger of being run over in both directions. And then there’s also the fact O’Toole hasn’t done much to change the things the people who don’t vote Tory (but could) don’t like about his party: the sharp elbows, small ideas and snotty tone.

Exhibit A: O’Toole was out recently sounding the alarm about the prospect of a Liberal-NDP-Green-Bloc coalition. Only the Conservatives, O’Toole intimated, could stand in the way of that fresh hell. Only it’s not fresh; Canadians have already contemplated it. And while they rejected it in late 2008, Justin Trudeau has now gone so far to the left there’s really nothing else to fear because it’s already here and people seem cool with it. Even the old warnings about Liberals not being able to manage the national finances don’t cut through the same way when Trudeau is spending literally all of the money.

The current zeitgeist in Conservative politics globally is to make a play for cultural conservatives, Boris Johnson-style. The problem being, in Canada they already vote for O’Toole. The closest equivalent to Johnson’s ‘Red Wall’ of former Labour voters in the North of England is probably Atlantic Canada, but it’s nowhere near as rich in seat count, nor is there much evidence of discomfort with Trudeau. Even Peter MacKay would have struggled to sell the modern Conservative Party of Canada in his backyard.

The other major trend for Conservatives is to go left on economics as they go right on culture but, as discussed, Trudeau is already handing out the bags of money. Moreover, people don’t seem fussed about the debt and nothing O’Toole could say is likely to make them care, something only interest rates can really do. Unfortunately for O’Toole, Canadians are broadly content despite the trials and tribulations of the pandemic; nor is there a totemic issue like Brexit on the horizon, i.e. any issue O’Toole could use to realign politics and lever people out of Trudeau’s camp. Had Trudeau failed on vaccines, or presided over a Boris-like COVID death toll, it might have been a different story.

To repeat, opposing ain’t easy, which isn’t to say there isn’t a way forward for O’Toole. But the Conservative leader should probably temper his expectations. Holding Trudeau to his current minority position is probably the best that can be expected with things being the way they are. Like it or not, Trudeau could be caught in a blackface (again) and he wouldn’t lose his voters. O’Toole should therefore play the ball, not the man, and speak to issues facing Canadians, a large percentage of whom need to see that Conservatives can be creative, constructive and responsible before they take a punt and put them back in office.

Even with tempered ambitions, O’Toole will still need to pick his policy fights carefully. With spending guaranteed to be gargantuan for years to come, now isn’t the time to focus on debt reduction measures, lest the voter hear the brand-reinforcing ‘cuts’ instead. Besides, things will improve spending-wise once the pandemic supports are withdrawn. O’Toole should instead speak about competition and growth and how he would generate it, something the other side isn’t doing.

The Conservatives will have to pick their culture fights even more carefully. Every volley of ‘woke’ or ‘cancel culture’ might fire up the Tory Twitter Taliban but they do more to tune out the accessibles O’Toole will one day need to add to his coalition. Instead of doing the easy thing by repeating lefty trigger words, the Conservatives should do the hard yards of defending what American columnist Jonathan Rauch calls the ‘constitution of knowledge’—the principles that keep people and societies from the fixed camps of ‘us’ vs. ‘them’, thereby protecting minority rights along the way.

Defending the principles liberals used to hold dear would be one way to flip the script on what is becoming a very tired debate between the censorious left and aggrieved right, a debate O’Toole cannot win in modern Canada. It would allow O’Toole to argue in moral terms that appeal to traditional conservatives, whether on policy or culture. It’s not right that young people are increasingly shut out of the housing market. It’s not right that a small cartel of dairy farmers gets to force our poor to pay more for the food they need to eat. Nor is it right, for that matter, that Trudeau’s Cabinet ministers are rewarded for partisanship and poor performance and punished for demonstrating principle.

In other words, what Erin O’Toole needs to do is the hard work the Conservative coalition has largely avoided doing since Stephen Harper retired from active duty. It must listen to voices outside of its existing base and find new ways of appealing to a broader subset of Canadians. O’Toole needs to stick to principles, not pray for miracles.