Our elected leaders have failed us in their COVID-19 response

Scott Gilmore: The death toll is unacceptable, the response by elected leaders too slow and Canadians should be much angrier. It didn't need to be like this. 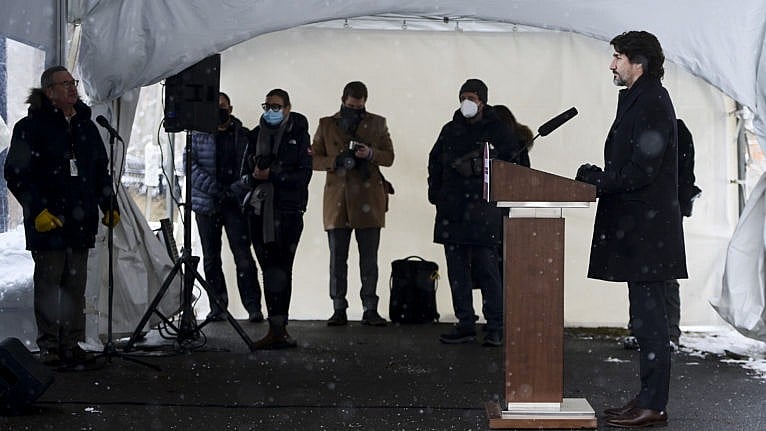 Trudeau holds a press conference at Rideau Cottage during the COVID-19 pandemic on Jan. 5, 2021 (CP/Sean Kilpatrick)

We need to be angrier.

So much has been lost. Over 650,000 Canadians have been infected with the coronavirus. Sixteen thousand are dead. Today another 160 will die. It’s the equivalent of a fully loaded Boing 737 crashing and killing everyone on board, day after day after day. And these grim numbers hide the human tragedies behind every death. People are dying alone. Families are being broken. Every day new widows, new orphans. And worse still, it didn’t have to be like this.

The cure is here. In fact, Canada has ordered more vaccines per person than any other country in the world. But, as a record numbers of Canadians die daily, there is a strange lack of urgency. Vaccine doses have remained unused in warehouses and in freezers across the country.

Ninety years ago, in the early days of January, there was another deadly outbreak. Diphtheria was spreading in a northern Alberta town. The local doctor knew that if residents weren’t inoculated quickly, it would be disastrous. They needed urgent help, but there was no telegraph line. So, even though it was -50 Celsius, two local men harnessed up a dog sled team, and headed south. Eight days later, and after having fallen through the ice once, they arrived in Peace River with the dire news (and then were immediately hospitalized).

A telegram was immediately sent to the provincial Ministry of Health, and they immediately contacted a bush pilot named Wop May and asked him to undertake a perilous mercy mission. The next day May took off in an open-cockpit biplane and headed north, flying dangerously low because of the snow and headwinds. At one point, the charcoal heater keeping the serum warm caught fire and he had to make an emergency landing in the wilderness. After the flames were extinguished, he held the vials in his armpits to keep them from freezing and took off again.

After an overnight stop, and another 200 miles, May flew over the town to see the RCMP had organized the population to clear a landing strip on the frozen Peace River below. The serum was delivered, the outbreak stopped. After another dangerous flight home, the bush pilot was rightly greeted on the airport field by a crowd of 10,000 people who hailed him a hero.

What if a similar call for urgent help was made today to Jason Kenney’s office? Judging from how they’ve managed the current pandemic, and assuming they were even in the office (and not in Hawaii) to take the call, we can safely assume the response would be far short of heroic. And, undoubtedly, the fatal results would be blamed on Ottawa.

Canadians have been promised that anyone who wants to be vaccinated will get a shot by September. That seems optimistic. Even as a new variant of the virus threatens to accelerate the pandemic, our leaders seem, at best, concerned. Prime Minister Justin Trudeau has furrowed his brow and said he is “frustrated”. If only he, as the national leader, could do something to help Canadians survive a national heath crisis. Implement a national vaccination campaign, for example. But, his hands are tied of course. It’s someone else’s fault.

And, let’s be clear, from the Prime Minister on down, our leaders are directly responsible for these deaths. As I’ve pointed out before, our per capita death rate is multiple times worse than some other countries as large as we are and as wealthy as we are. It didn’t need to be like this.

I can understand why we are not protesting in the streets, but why are we simply not angrier? Judging from the letters to the editors, social media and the call-in shows, Canadians are mostly rolling with it. Have we grown to expect so little that we aren’t shocked when our leaders bungle the single most fatal health crisis in a century?

In Toronto recently, at another airport, another crowd gathered. They went to hear Premier Ford speak. He wasn’t there to announce a new urgent mercy mission. He was there to complain that the federal government was not doing more to screen international travellers (even though one of his own advisors has pointed out publicly they are responsible for a “tiny, tiny fraction of all cases”). And he blamed the federal government for not sending him enough vaccines (even though his government has distributed less than 40 per cent of the doses already received.)

This isn’t leadership. And it certainly isn’t heroic. It’s pathetic. And it’s infuriating. And we should be incandescent with rage knowing another 160 Canadians will die today because of it. 2020 was taken from us by the virus. But 2021 is being stolen by our incompetent elected leaders. But maybe, just maybe, if we shouted more, they might understand what’s needed, harness up, and get going.