Opinion: Medical distress on planes is rising—but what each airline keeps handy, and how flight crews are trained to respond, varies wildly 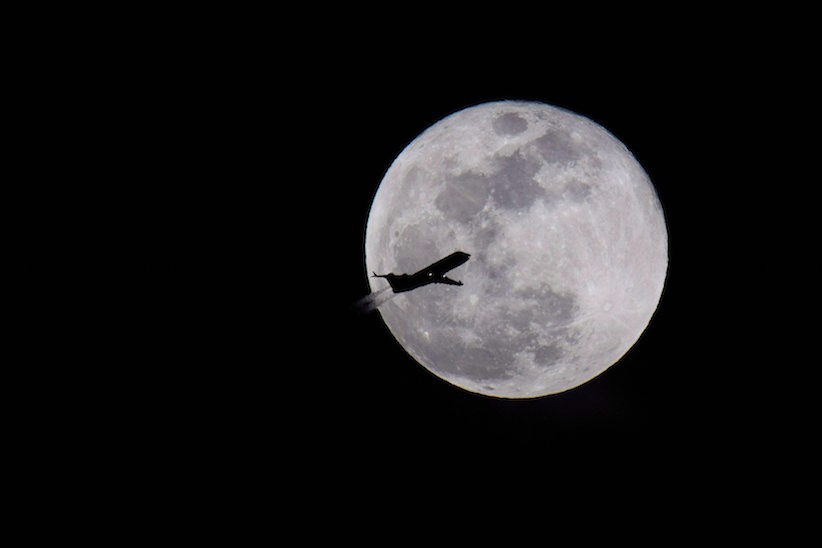 A airplane flying over Norfolk, Va., is silhouetted by the full moon on Wednesday, Jan. 31, 2018. (Todd Spencer/The Virginian-Pilot via AP)

Blair Bigham is a multimedia journalist based in Hamilton, Ont. As a flight paramedic and physician, he has responded to more than a dozen in-flight medical emergencies on commercial aircraft.

The cabin of the Boeing 777 would have been pitch black were it not for my laptop screen when the familiar “ping” went off.  No one stirred from their contorted positions of awkward sleep as a flight attendant hurried past me towards the rear of the plane.

“Ladies and gentlemen, I’m sorry to disturb your sleep—but if there is a doctor on board, would you please identify yourself to a flight attendant?”

As a resident doctor in the emergency department, calls like that are what I live for.  It sounds strange, for sure—but emergencies are what I train for, and I was nothing but eager to put my honed skills to work on board an airplane.

But then came the fear. I was at 38,000 feet, somewhere between two continents, and I was alone: no nurses, no CT scanners, no pharmacists. I am, at best, a highly educated first aider in a long, metal tube racing towards the rising sun at 500 miles an hour. And when I arrived at the rear galley, my fears were confirmed when I was handed a “medical kit” the size of a shoebox, containing a handful of medications and a blood-pressure cuff so old it belonged in a museum.

Sadly, my situation was far from unique—and that’s putting the lives of passengers at risk.

As more and more people fly on commercial airlines—an estimated 2.75 billion passengers worldwide flew in 2015, with about 133 million of them Canadian, representing a spike of 27 per cent from six years prior, and the International Air Transport Association predicts 4 billion people will take a flight in 2018—there is more of a chance that a medical issue could occur on the plane. While airlines aren’t mandated to record or report emergencies that occur at altitude, there were 60,000 in-flight medical emergencies tracked in 2016—about 16 for every one million passengers—and a doctor was only on board for half of them. About 10 per cent of those flights are diverted, an expensive event for any airline: By the time fuel, landing fees, rebooking passengers who misconnect, and hotels are paid for, it can cost nearly US$1 million to divert a long-haul flight.

But emergency landings are never quick.  It takes a minimum of 30 minutes to plan an emergency landing, and that assumes you are over land.  Further, some aircraft, like the Airbus A380 jumbo jet, can only land at specialized airports.

To combat the need to divert, and to meet the requirements of air regulators, airlines stock medical supplies for common ailments, hoping to avoid costly diversions. But what they stock—and how flight crews are trained to respond—varies wildly depending on the airline.

A recent publication in the Canadian Medical Association Journal reported that both Air Canada and WestJet carry more than the minimum standard required by Transport Canada, the federal regulator of airlines. Still, the authors note that some medications, like epinephrine, are carried in highly concentrated vials and require dilution—a task that could lead to overdosing patients. The article makes little note of how the kits can be improved.

Turns out, the plane I was on was well-stocked by international and Canadian standards. Most regulators follow the recommendations of the International Civil Aviation Organization—and it endorses a minimalistic approach to on-board emergency equipment.

In fact, the ICAO and most regulators don’t require defibrillators to be on board, an inexcusable stance in an age where the current-delivering device is becoming as common as a fire extinguisher. While less than one per cent of in-flight medical emergencies involve a cardiac arrest, they’re vital when one does occur; the odds of survival drop 7 to 10 per cent for every minute that passes without an electrical shock from a defibrillator being applied to a patient whose heart has stopped beating. “After ten minutes, there is very little chance of survival,” says Andrew Lotto, the resuscitation manager of the Heart and Stroke Foundation of Canada.

Ireland-based Ryanair bowed to public pressure after the 2015 death of 47-year-old Davina Tavener onboard one of its planes. The discount airline argued that because it flies continentally, it can land at any airport quickly. But coroner Alan Walsh disagreed: “I don’t believe there is any difference between short-haul flights and long-haul flights. Cardiac events don’t choose whether they are 10 minutes into a flight or 10 hours into a flight, it can happen at any time.”

Still, Ryanair’s regulator, the Civil Aviation Authority, along with Transport Canada and the European Aviation Safety Administration, don’t mandate the devices be carried. The Federal Aviation Administration has required U.S.-based airlines to stock defibrillators on all airplanes since 2004.

Defibrillators aren’t the only piece of medical technology lacking aboard many commercial planes. Other medical technology has also advanced significantly in the last decade, and those innovations can be ported over to airplanes. Heart tracings and blood work can now be done by paramedics in the field and transmitted to the cell phone of an emergency doctor, and the doctor-in-a-box “Tempus” device can be used by in-flight doctors or trained attendants to send vital signs, biometric data and blood results to experts on the ground so that the right decisions can be made about care and diversion. But such tools are expensive and depend on broadband internet or sophisticated satellite uplinks, which most airlines haven’t yet invested in.

That extra information can save lives, says Dr. T.J. Doyle of U.S.-based aviation medical consulting firm STAT MD, which answers real-time calls of distress through uplinks with aircraft flown by some of the biggest airlines in the world. “The problem is, you might have to turn off the WiFi for the 300 people who paid for it” while doctors on the ground receive data, he says. “Airlines care about weight and cost; if there is no law, [airlines] can do what they want.”

Robust international regulations that force penny-wise airlines out of being pound-foolish are sadly lacking.  An aircraft worth $100 million can surely stock modern emergency medical gear, and in the world of in-flight WiFi, developing the networks to get valuable information from the air to medical consultants on the ground could be a reality. And indeed, some airlines, like Emirates, are years ahead of their peers, with such systems up and running. Others, like Lufthansa, have innovative programs that pre-register flying doctors that are willing to assist with medical situations.

But many others stick to the bare minimum—and they’re putting the lives of their passengers at risk. More than four billion people will step foot on a commercial flight this year, and it’s time for Transport Canada and their counterparts around the world to listen to emergency experts rather than the airline industry and modernize lifesaving supplies and technology on commercial aircraft.