Opinion: As Brown exits the Ontario PC leadership race, Jen Gerson looks at what made his resignation inevitable—and his second campaign delusional 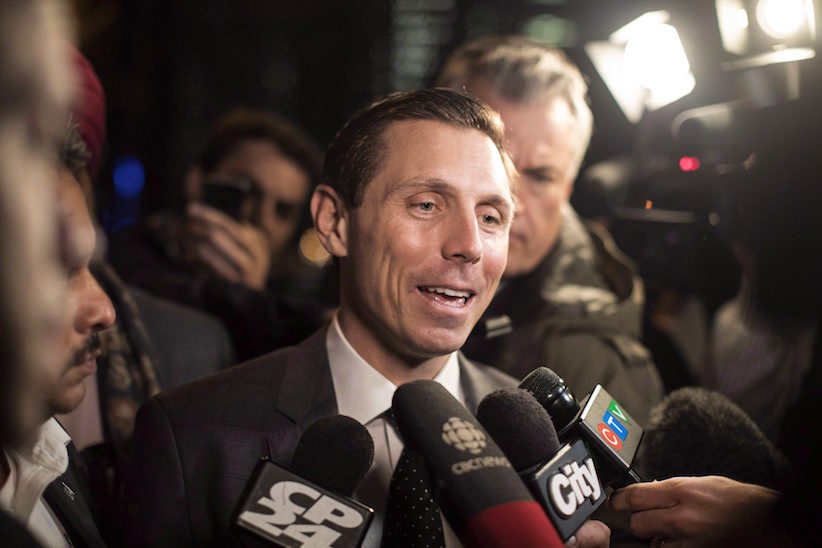 Beset by allegations and leaks on all sides, Ontario PC MPP Patrick Brown bowed out of the race to replace himself on Monday. He pointed to the malicious gossip and threats flung at his family—leading, he says, to his mother’s hospitalization—as the primary motivation for this decision. This comes amid ceaseless drips of damaging leaks, the latest from the Toronto Star reporting that Brown told top party officials to “get me the result I want” in a nomination battle that is now being probed by police.

No family should have to endure threats, and I have no doubt his family has, indeed, been unfairly bombarded. But Brown had to have known that that would be a risk when he re-entered the leadership race eleven days and a lifetime ago. It seems likely, instead, that he realized he couldn’t possibly win—and that if he did, his name on the ticket would ensure another Ontario government led by Kathleen Wynne. If so, it’s a shame it took him so long to come to this realization.

At the very least, this second resignation for the sake of his family gives him the opportunity to quit with the dignity he was denied last month when his caucus hastily called for his head. But dignity is small consolation for the character flaw he must now contend with: his own weakness.

His fight to keep that dignity was, ostensibly, the primary point of contention in a conference call that led to his ouster, the content of which was published by Maclean’s over the weekend. I was one of the few people able to listen to the recording of that call in full.

On that night on Jan. 24, after he had already faced the media and told the public that he would not resign in the wake of CTV’s story alleging sexual misconduct, Brown appealed to caucus for another day before they demanded his resignation. He acknowledged that he would step down if necessary, but pleaded for time.

I don’t believe that Brown was demanding time so that he could craft a more dignified resignation; I don’t believe that anyone in his caucus believed this, either. I suspect Brown was trying to buy another day so that he could launch an aggressive defensive campaign that would tear down the credibility of CTV and the women who made allegations against him. This did not feel like a caucus about to ambush Brown; rather, it was a panicked group that seemed to be blindsided by these allegations.

Indeed, some felt betrayed by his decision to hold a press conference without adequately consulting them.

“I think if I could put any stock in your statement, Patrick, it would have required a conference call ahead of your press conference this afternoon,” Randy Hillier said on the call.

The lack of trust was only exacerbated by a need to act quickly, rushed along by social media, which now plays a huge role in how our leaders make decisions in crisis situations. During the course of that call, as Twitter and Facebook are named, pressure mounted on caucus to act as quickly as possible. It’s possible to feel tension grow as the minutes ticked by and Premier Wynne and NDP leader Andrea Horwath weighed in on Twitter.

Had this scandal broken ten years ago, it’s difficult to imagine that call playing out that way. Brown would probably have been forced to resign, but he may have bought himself an extra day or so to do it. It’s a clear sign that social media, a medium that’s demonstrably easy to game, is pushing our leaders into more panicked decision-making.

While caucus seemed largely sympathetic to Brown, even hopeful that he could clear his name, they had also concluded that the allegations would torpedo the party’s chances in the coming election—and further, that Brown’s attempts to clear his name would dominate any media coverage of the party. We only need look at the circus that has played out over the past few weeks to realize that the caucus’s assessment was well-founded. The allegations against Brown—sexual and otherwise—had become a malignant presence in the leadership campaign and for the party as a whole, critically undermining the public’s ability to trust the Progressive Conservatives’ ability to form government.

RELATED: Inside the explosive Conservative Party fight over Rick Dykstra

Ultimately, Brown’s supporters and many ordinary voters are going to read this transcript one way, and those who work in politics another. After all, most folks work in jobs for bosses they don’t choose; we’re expected to show deference, respect and loyalty to our bosses, even if we don’t like them or agree with them. A lot of people will thus read that conference call as a kind of brutal betrayal by underlings who undermined a leader who enjoyed a democratic mandate.

That’s not wrong, but I don’t think it’s a complete way of reading the situation. Those MPPs weren’t Brown’s staff; they were elected in their own right. It wasn’t caucus’s duty to offer their fealty and loyalty; it was Brown’s job to command it. He couldn’t. That is what cost him his job, and made his recently aborted redemption tour and leadership campaign so completely misguided and delusional.

Imagine, for a moment, that Brown came into that call, called everybody’s bluff, and just refused to resign. This might have been disastrous for his party, and it probably would have precipitated a different kind of crisis. But at least he wouldn’t have been taken out to the woodshed and shot like a rabid dog in the night.

Brown’s tactics in that conference call reflect that weakness. The leader let his caucus discuss his resignation for more than 20 minutes before he chimed in. This allowed Brown the opportunity to secretly probe his support and find arguments that he could use to his advantage.

If he did win a leadership race a second time around, how could Brown imagine he could lead that caucus into an election? Even if that election were a smashing success for the Progressive Conservatives and his caucus was inundated with new MPPs, members of that caucus who were on that call would be his veterans—the very people who would have to be tapped for his cabinet. What credibility could he possibly have with them?

Many other commentators have long pointed out the perils of moving away from the traditional Westminster-style system of picking leaders through a vote of caucus. Instead, Canadian parties now pick their leaders through votes of the party membership. Leadership campaigns are now lucrative affairs for parties, generating more members and, thus, membership fees.

This transcript, for me, highlights the fundamental problem with that hybrid system in the face of a crisis. It is a system that can be gamed by a good salesman backed by a better strategist.

It’s one thing to generate a bundle of new party members. But if you can’t also command the confidence of your caucus, all it gets you is a title on the door.