Amir Attaran and Lorian Hardcastle: Medical officers of health have the power to defy the government and impose the necessary public health measures to stop the second wave 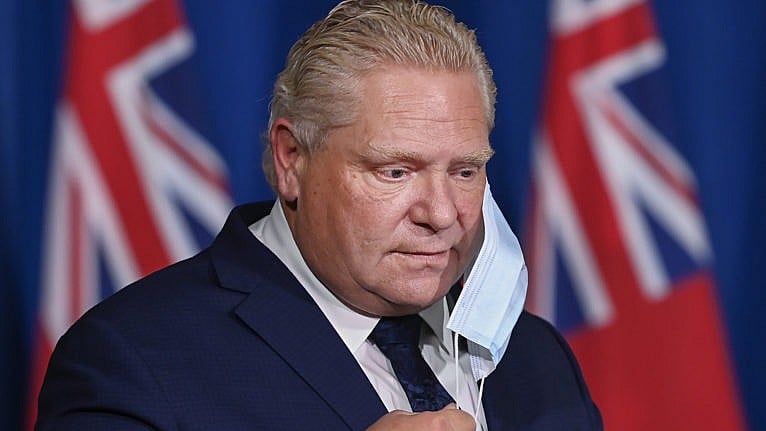 Ford arrives at a press conference at Queen's Park during the COVID-19 pandemic in Toronto on Nov. 3, 2020 (CP/Nathan Denette)

Amir Attaran is a lawyer, biomedical scientist, and Professor in the Faculty of Law and the School of Epidemiology and Public Health at the University of Ottawa

The fight against COVID-19 is in a new, unprecedentedly dangerous phase. New cases are trending upwards, the percentage of positive tests is increasing, ICUs are becoming more full, and public health officials are increasingly unable to trace cases of COVID-19 back to particular sources—meaning it’s waiting to get you everywhere.

Alberta, Manitoba, Saskatchewan, Ontario and Quebec are measuring cases at rates worse than much of the United States. Where before their premiers courageously closed large gatherings and risky businesses like bars and gyms, the situation worsened when they ignorantly tried to keep their provinces open at all cost.

Catastrophe is guaranteed. Weirdly it’s even been promised: Alberta’s premier, Jason Kenney, has pledged the province will not shut down businesses before the province reaches “absolute catastrophe”. Manitoba, did not impose new restrictions until case rates skyrocketed and doctors warned of “potential horror”, is now finding it waited too long.

Meanwhile in Ontario, the Toronto Star reported that politicians rejected the advice of the government, academic, and hospital scientists by setting the threshold for COVID-19 restrictions four times higher than they recommended, and when that dangerous decision became controversial, the politicians falsely blamed the scientists.

It never should have been this way. These provinces employ dozens of men and women who have the authority to defy the government and impose the necessary public health measures. Each is equipped with legal powers straight from provincial legislatures, just like the premier.  Much like Dr. Tony Fauci staring down Donald Trump, each of these officials has a moral duty to speak truth to power and an ethical duty as a physician to follow science rather than political whim.

But unlike Dr. Fauci, they have the superpower to make their word law.

So who are these mighty men and women? Canada’s provincial and local medical officers of health, of course. Except that many appear to be unwilling to flex their regulatory muscles. These medical milquetoasts deserve at least as much scrutiny for the current predicament as the premiers—and arguably more, considering that public health is their only job—so it is important to discard their haloes and hold them accountable.

What Can Medical Officers of Health Do?

The short answer is, an awful lot, almost everything needed to squash the second wave.

In Canada, the law gives public health and safety officials the power—indeed, the duty—to call out and stop disasters before they happen. A police officer can order a disorderly crowd to disperse. A firefighter can order occupants out of a burning building. A ranger can order a factory to clean up a toxic spill. None of these officials needs to ask the government, much less the premier, for permission to act. Most Canadians would be horrified if they dithered and pleaded with government, rather than acting with full speed to prevent disasters.

The same goes for medical officers of health. They can order just about anything to shut down a pandemic, without asking permission, and whether or not the government agrees. A medical officer of health’s order can clearly target a specific individual or establishment, and they routinely impose these orders with little quarrel.

But their courage wheezes out when it comes to issuing orders broadly. To contain what are quaintly called “communicable diseases”, or pandemic emergencies like COVID-19, the provincial legislatures have given medical officers of health legal powers that are expansive enough to issue orders across a whole city, region, or province—systemic orders, basically.

Every province in Canada equips their medical officers of health with the power to make systemic orders. The laws vary from place to place of course, but not vastly. You don’t need to be a lawyer to grasp this, and Alberta’s law is pretty typical in saying that a medical officer of health:

may do any or all of the following:

(i) take whatever steps the medical officer of health considers necessary
(A) to suppress the disease in those who may already have been infected with it,
(B) to protect those who have not already been exposed to the disease,
(C) to break the chain of transmission and prevent spread of the disease, and
(D) to remove the source of infection;

That cavernous legal mandate is enough, for example, to order masks worn, to order schools closed or to order businesses shuttered.

But there is more. Where there is a “public health emergency” such as COVID-19, a medical officer of health has a blank cheque to “take whatever other steps are, in [his or her] opinion, necessary in order to lessen the impact of the public health emergency.” Legal language tantamount to this is found in other provinces too (not just Alberta) and it authorizes a medical officer of health to order any steps at all, so long as it rests on a good faith medical opinion.

Now these powers are obviously vast. In the wrong hands they are capable of tremendous abuse. But overzealous abuse has not proved to be today’s problem. Where medical officers of health have had their COVID-19 orders challenged in court in Ontario and Newfoundland, they have won.

Rather the more surprising—and perilous—problem is underzealous abuse, because most medical officers of health are only rarely using their powers in the second wave, or worse, they are doing so only with the consent of politicians.

Canada’s On Fire, So Why Aren’t They Acting?

Simply put, the medical officers of health are chickening out. Like firefighters watching a lashing inferno and nibbling donuts, they are abandoning their authority and moral duties in the pandemic. The legal powers are there in abundance; it’s just the courage that’s not.

Thus Doug Ford, Jason Kenney and Brian Pallister met no significant resistance in opening their provinces, and keeping them open as the number of COVID-19 cases shot into the stratosphere. While some medical officers of health wrung their hands or muttered, “That’s a bad idea”, almost none took the initiative to lower the curtain on bars, restaurants, gyms, outsized gatherings and even strip clubs—which of course they had the power to do.

Consider Dr. Vera Etches, who is Ottawa’s medical officer of health. She argued against closing bars, restaurants, and other infection hotspots mere days before the city shattered its record for daily COVID-19 cases in October. When the province stepped in to shutter those businesses briefly she agreed—only to flip-flop again before the month was out. Lately she joined the mayor to lobby against the closures and said, “We need something that allows people to stay open, not close and open”.

Dr. Etches explains she is “advocating … because of the harm potentially to businesses”. That sounds thoughtful, except as the city’s public health guardian and not its chamber of commerce or mayor, weighing business interests is totally outside her wheelhouse—and illegal. The law is crystal clear: “If a [public health] order is necessary, especially in circumstances where the risk is high,” explains Ontario’s Divisional Court, “then its financial impact is irrelevant”.

Other medical officers of health, like Dr. Eileen de Villa in Toronto, have issued some gentle closure orders, but shied away from doing everything they say is necessary. Dr. de Villa pleaded last month with Ontario’s government to order people to stay at home except for essential trips, but when she was rebuffed, rather than order it herself, she refused.

Why? She feared that “broad changes … may exceed my authority and therefore render me personally liable”.

Morally and legally, this is hard to understand. Fear of personal liability is not an ethical reason for inaction when a giant city is in danger. And the fear is overblown: for Dr. De Villa to be personally liable, angry Torontonians would have to persuade a court that she intentionally flouted the law and acted out of malice or bad faith rather than health protection—which is just impossible.

No wonder that no medical officer of health has ever been held personally liable by a court. Even so, Dr. De Villa has never found the courage to curb nonessential trips out of the home, as she herself called for a month ago.

But perhaps the saddest case is Dr. Deena Hinshaw, who has done little to check Alberta’s gung-ho premier, Jason Kenney. He has staunchly refused to impose restrictions, instead telling partygoers to “knock it off” and adopting a “personal responsibility” approach to public health. Meanwhile, Alberta hit a record-breaking 919 cases in a single day and called off contact tracing outside of high priority settings such as hospitals, schools, or continuing care. A letter signed by over 70 doctors asking for a two week lockdown to damp down the cases and allow contact tracers to catch up was ignored.

While Dr. Hinshaw has expressed “concern” and made recommendations, she seems unwilling to rock Kenney’s boat. In her words, “the chief medical officer of health is not a decision maker,” but rather just “is an adviser and someone who recommends.”

Not only is that wrong, but it is dangerously foolish: the legislature gave Dr. Hinshaw the decision-making powers we quoted earlier in this article. It’s her abdication not to use them and self-demote into just an “adviser”.

Those two brave, ethical medical officers of health took a risk, knowing that Premier Doug Ford disagreed with their orders. But he did not dare fire them during a pandemic and cause a giant scandal, any more than Donald Trump had the cojones to fire the troublesome Dr. Fauci.

There is a lesson in that, because if Canadians are going to get through COVID-19 intact, Canada’s medical officers of health must find the morality and courage to stare down the politicians making dangerous errors. That is why our society entrusts them with sweeping legal powers.  Your life, and those of people you love, depend on them not chickening out.