Hate crimes against Muslims have spiked—while Black and Jewish Canadians continue to be assailed. What can politicians do? 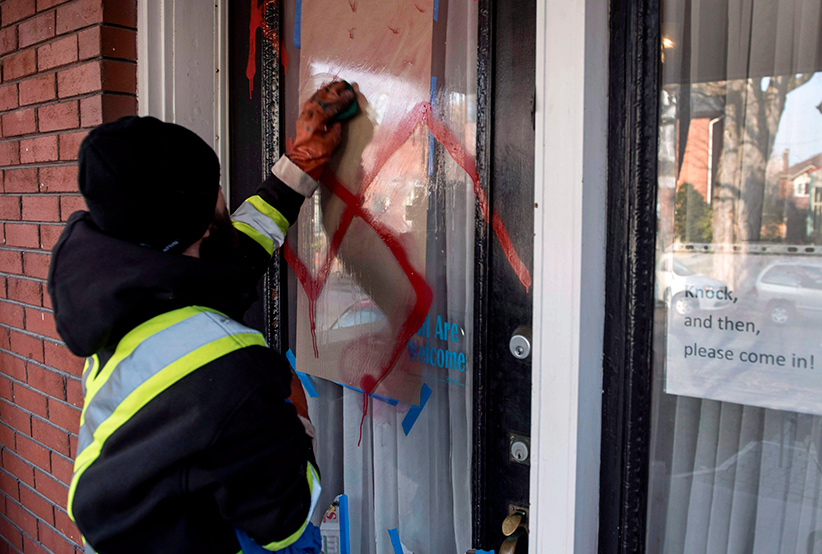 A graffiti removal worker cleans anti-Semitic graffiti, including a swastika, that was spray painted on the door of The Glebe Minyan and home of Rabbi Anna Maranta, on Tuesday, Nov. 15, 2016 in Ottawa. (Justin Tang/CP)

There is, however, one statistic that remains unchanged: Blacks and Jewish Canadians continue to be the main targets of hate crimes in Canada.

Unlike with discrimination, the purpose of hate crimes is to intimidate or terrify an entire group of people by targeting someone based on membership within a particular group. In Canada, the main motivations for hate crimes are race and ethnicity, religion, or sexual orientation. Hate crimes, particularly if unreported or unsolved, may also breed distrust amongst members of the targeted community. This highlights a significant need for solutions to address hate crimes motivated by race and religion and, by extension, racial and religious discrimination in Canada.

This has long been a problem. After all, white supremacist organizations in Canada are not new; within six years of its founding in Atlanta, Georgia, the Ku Klux Klan (KKK) was reported to be active in Canada. As believers in Anglo-Saxon Protestantism, the KKK espoused hatred towards immigrants and Catholics. The organization became so powerful that it played an instrumental role in the defeat of Saskatchewan Premier J.G. Gardiner in the 1929 provincial election. Today, according to Barbara Perry at the University of Ontario Institute of Technology, approximately 100 white supremacist groups are active in Canada, mainly concentrated in Ontario, Quebec, British Columbia, and Alberta—the four provinces with the highest rates of reported hate crimes.

So it’s incumbent on our political leaders to act on this systemic issue. What can they do?

MORE: A closer look at the rise in hate crimes in Canada

In March, the House of Commons adopted MP Iqra Khalid’s motion, M-103, which asked the government to request the Standing Committee on Canadian Heritage undertake a study to find solutions to eliminate systemic racism and religious discrimination. The motion also calls on the committee to ensure the collection of data on hate crimes. In addition to this data, the committee should also recommend the government collect disaggregated race data, and instruct provinces and cities to do the same for services and institutions under their jurisdiction.

It’s only through tracking race and religion in reported hate crimes that the long-term trend of high incidents targeting Blacks and Jewish Canadians—and the sharp increase in incidents targeting Muslims in 2015—is revealed. Expanding this data collection to areas such as health care, education, and policing will better allow governments to determine whether specific racial and religious groups are adversely affected by institutional policies—as the Toronto District School Board discovered in April when its report noted almost half of all students expelled were Black.

This, however, should not be an initiative solely under the purview of the federal government. Provincial governments, particularly the province of Ontario—which is home to almost half the hate crimes in Canada and seven of the 12 major cities with a hate crime rate above the national average—must also be engaged in finding solutions. Earlier this month, the Ontario legislature passed the Anti-Racism Act, 2017. With a provincial election on the horizon, each of the main political parties should make it clear in their platform that if elected, they will not rescind this legislation.

As part of its three-year anti-racism strategy, Ontario’s Anti-Racism Directorate signalled its intention to work with the Ministry of Community Safety and Correctional Services to collect and publish data on hate crimes. The Directorate should also use this data to suggest initiatives with the specific purpose of working with communities where these crimes are more likely to occur. Other provinces should follow Ontario’s lead and implement anti-racism strategies that are relevant to their own demographics and work to support communities most affected by hate crimes.

MORE: Too many Canadians don’t recognize the Islamophobia in their country

Provincial governments should include local police departments in these strategies. Because police departments are often called to investigate hate crimes, they may already be aware of individuals with a history of exhibiting hatred towards others. Police departments can tackle hate crime by creating strategies similar to anti-street gang strategies. Public Safety Canada highlights prevention, intervention, and suppression efforts as a three-pronged approach to diminish the prevalence of street gangs. Similar tactics could be used to diminish the prevalence of hate crimes. As evidenced with the man accused of killing six people at the Centre Culturel Islamique de Québec, a lack of surveillance of those who lean toward right-wing extremism can have tragic consequences.

Schools must also be included as active partners if hate crimes are to ever decrease. Young people under the age of 18 accounted for the largest proportion of those accused of committing hate crimes motivated by race, religion, and sexual orientation. It’s imperative to consider the influencers in a child’s life who may encourage them to commit a hate crime.

According to Nina Jablonski, a professor of anthropology at Penn State University, children as young as six years old can have implicit attitudes—or unconscious biases—about social groups within society. These biases are reinforced by information transmitted to them by people they respect, such as a teacher or a parent. Provincial governments should therefore consider allowing children’s aid societies to investigate and remove children from their homes if parents are members of white supremacist or neo-Nazi organizations. The RCMP has flagged nine right-wing extremist groups with a history of violence and intimidation, including assault and murder. The high prevalence of youth accused of hate crimes in Canada may be a result of undue influence and pressure from parents or other guardians. As with other speculations of abuse in the home, teachers should be encouraged to report suspected white supremacist or neo-Nazi activities in the home and these should be treated as situations harmful for children—as in other cases of neglect and abuse.

When racial and religious groups insist discrimination is a hindrance to their success and well-being in Canada, governments must act forcefully to remove this barrier to demonstrate that mistreating someone based on their race or religion is unacceptable in contemporary Canadian society. This display of solidarity from politicians may act as a deterrent to future hate crimes and finally bring down the stubbornly high incidents of hate crimes towards Blacks and Jews, as well as the spike against Muslim Canadians.