Prime Minister, how much broccoli did your family eat? In detail!

Marie-Danielle Smith: The PM appeared before committee for the first time. Here is an approximation of what happened, in language we can all understand. 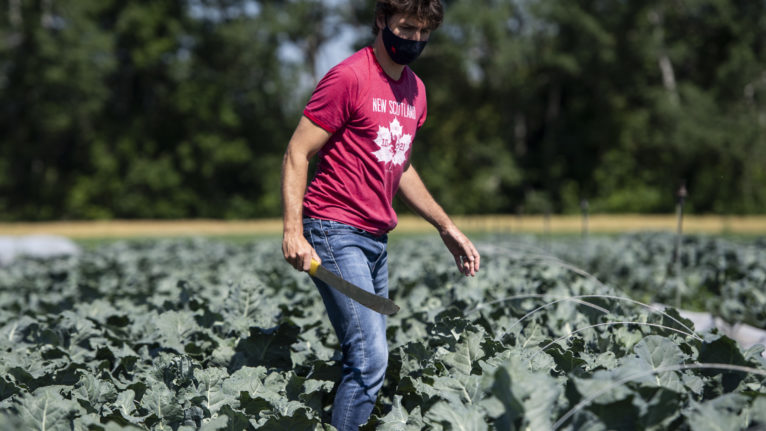 Trudeau holds a harvesting knife as he harvests food at the Ottawa Food Bank Farm in Ottawa, on July 1, 2020 (CP/Justin Tang)

Trudeau and his opponents were, as always, worlds apart. To him, his family’s dealings with a charitable behemoth and his government’s dealings with them were as apples to oranges. To them, of course they weren’t.

And so, each in their offices (or home offices), often struggling with the virtual infrastructure, sans the heckling exclamations that would have rung through a committee room in person, this group of federal politicians—trusted by their electors to bring scrutiny and good policy upon Ottawa—settled into their predetermined positions for an hour-long repartee.

Because the ins and outs of Ottawa (and, it seems, charities) can be complicated, and politicians sometime struggle to speak plainly, here is a loose approximation of what down on this historic day.

Prime Minister Justin Trudeau: Colleagues, I’m here to tell you how much this government appreciates a healthy diet. We believe young people need—in fact cannot live without—vegetables. We know that the fields have been barren this year. Under extraordinary circumstances, our independent public service identified a farm from which a multitude of carrots could be distributed to our nation’s vulnerable students. Indeed it was the only capable—

Chair Wayne Easter: It is going to be okay. My iPad is at the ready.

Trudeau: (Clears throat.) My family has visited the farm and eaten its broccoli. Even though I am a vegetable expert myself and took extra time to scrutinize this decision, I should have stepped out of the room when my highly independent colleagues were discussing its merits. For this, for not moving away from the table, I take full responsibility. In fact, I volunteer it. In conclusion, I never talked to those farmers. I continue to believe in the fiddlehead class and those working hard to join it.

Conservative MP Pierre Poilievre: How much of the broccoli did your family eat, Mr. Trudeau? In detail!

Trudeau: I don’t have that.

Poilievre: I want an itemized list of every floret consumed by your mother, your wife, your brother, and yourself. Every floret.

Trudeau: I don’t have that.

Poilievre: How could you possibly not know, when your spouse so recently consumed a sumptuous portion of broccoli?

Poilievre: I don’t know how much clearer my question can be. They give you vegetables. And then you fertilize their vegetables. If broccoli isn’t an incentive I don’t know what is. Answer the question.

Poilievre: HOW MUCH BROCCOLI?

Liberal MP: Um, guys? The chair’s power has gone out.

NDP MP: Actually, the the procedure is the vice chair takes over.

Poilievre: Oh. Well. That’s me. I’m going to give the floor to me.

Poilievre: HOW MUCH BROCCOLI?

Poilievre: HAVE YOU READ THE ETHICS ACT?

Chair: It wouldn’t be the first time you tried to put my lights out, Mr. Poilievre! One more question.

Poilievre: You’re saying you don’t know how much broccoli your family has consumed. Nobody believes you. HOW MUCH BROCCOLI?

Trudeau: I’m co-operating with the ethics commissioner, and that’s what Canadians expect.

NDP MP Charlie Angus: Do you realize what you’ve done here? You’re hurting the children, Mr. Prime Minister. Sure, there were red flags about this farm from the start. Underpaid labour, bad irrigation, uneven harvest. But now those children are left without carrots or vegetables of any kind.

Trudeau: In a drought such as this, it is just as bad to act slowly and without mistakes as to act quickly and—

Angus: Have some remorse!

Trudeau: I’d like to take a moment to recognize my deep personal admiration for the professional, independent public service.

Angus: Frankly, what about parsnips? What about sweet potatoes? Why were no alternatives considered?

Trudeau: Canadians expect—indeed they know—that their government cares deeply about their access to root vegetable crops.

Trudeau: Something something the public service, Mr. Angus.

Bloc Québécois MP Rhéal Fortin: Your finance minister has a sprout growing at this farm! His family accepted massive amounts of broccoli free of charge and he… forgot about it?! How can you forget about that much broccoli? It wasn’t just a head of broccoli, Mr. Chair! It was a hydra of broccoli!

Trudeau: I didn’t know about that. There’s, in fact, a lot I don’t seem to have known.

Fortin: By the way, did you ever try to find out if the farmers were registered to sell you their vegetables?

Trudeau: Well, they weren’t exactly trying to sell me vegetables. I was trying to help them provide carr—

Fortin: Did you ever ask any of your staff to check if they were registered?

Trudeau: Well, see, I don’t think they needed to—

Fortin: Did you ever ask the finance minister’s office to check if they were registered?!

Liberal MPs on the committee: Let’s all just take a deep breath, shall we? Inhale. Exhale. Let’s close our eyes and think about the wonderful job our government is doing. And let us also think about the children.

Trudeau: Certainly, and I’m glad you asked the question. Our government remains absolutely committed to the youth. To the carrots. To the procurement of carrots. Mistakes were made. But ultimately, the carrots, and no other vegetables pertaining to this discussion, are what mattered.

Trudeau: It’s true. Let me take a moment to discuss her book.

Liberal: Isn’t it right, Prime Minister, that the broccoli is just a distraction? More to the point, isn’t it right that our friends in the opposition offer no credible alternative for leadership such that our ability to stay in power will not be threatened whatsoever by this debate? That, at the end of the day, our choices in vegetables, while predictable and narrow-minded, will have no bearing on our ultimate electoral results? That, whether or not broccoli was involved, and whether or not the farm itself falls apart, our ability to fertilize this nation’s lands in the best interests of the youth will be utterly unmitigated?

Trudeau: Like I said, Mr. Chair. I am co-operating with the ethics commissioner. And that’s what Canadians deserve.