Protesters threw rocks at the PM. It should matter more. 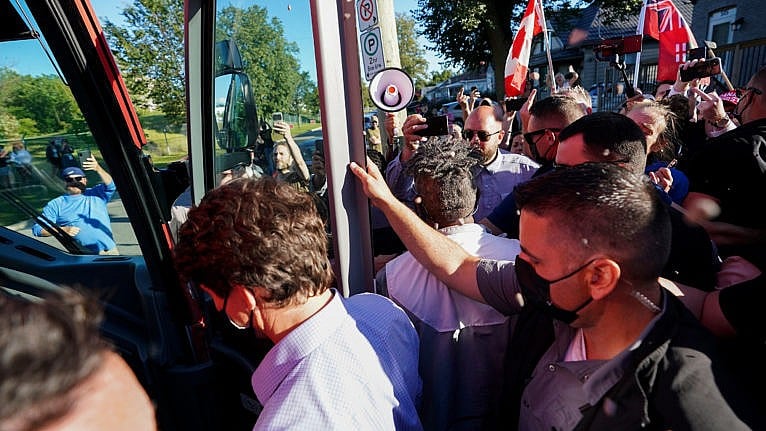 Gravel is thrown at Liberal leader Justin Trudeau, left, as the RCMP security detail provide protection, while protesters shout at a local microbrewery during the Canadian federal election campaign in London Ont., on Sept. 6, 2021. (Nathan Denette/CP)

This past weekend, someone in an angry crowd threw rocks (or gravel) at Justin Trudeau at an election campaign stop in London, Ont.

Afterwards, Trudeau told reporters on his campaign plane that someone had once thrown a pumpkin seed at him. Some of the rocks “might have ” hit his shoulder, he said. He quickly grazed his left shoulder to indicate. When asked by Global News’s Abigail Bimman (who was seeking clarity on a troubling event) if it “might have” or actually did hit him, he shrugged his shoulders and asked “does it matter?”

“It was just a little gravel,” he said.

It matters because it’s part of a terrifying series of physical and verbal vitriol on the election campaign trail that has seen the signs of candidates defaced with swastikas and obscenities, and their team members slapped and spit at.

It matters because the incident occurred in the same city that witnessed a terrorist attack that killed a Muslim family of four just three months before the election call was made.

It matters because the first thought for every BIPOC person across the country was “Imagine if it was a Black or Indigenous or Muslim person that tried to physically assault the Prime Minister.”

It matters because I’m about to become the mob’s next online target for calling this group of protesters what they are. They’re not “anti-vaxxer mobs,” as Trudeau keeps calling them. These are not all people frustrated by the lockdowns and the pandemic. They are a manifestation of white supremacist hate.

Many of the protests following Justin Trudeau have been marked by the kind of extreme rage that became familiar in the U.S. during Donald Trump’s presidency. Protesters have yelled “Lock him up,” “Traitor,” and “piece of s–t.” They have called for Trudeau to be hanged. They have verbally attacked members of his team and his security detail using racist and misogynistic language, the CBC reports.

“This needs to make us ever more convinced of the importance of the choice in this election,” Trudeau said on Aug. 29. “Do we fall into division and hatred and racism and violence, or do we say no.”

But it’s not as simple as saying no. This didn’t happen in a vacuum, or because of the pandemic. Hate, too, is a virus and it grows rapidly if left unaddressed. And it’s been left unaddressed in Canada for far too long.

There is a  link between the anti-vaxx movement and far-right groups that we need to talk about. (Note: the movement is separate from vaccine-hesitant people who have legitimate concerns.) An upcoming study by Amarnath Amarasingam, Stephanie Carvin and Kurt Philips for the Institute for Strategic Dialogue documents the connections, finding that “anti-mask, anti-lockdown and anti-vaccination movements in Canada are predominantly propagated by the far-right. Some of the most vocal critics of lockdown measures and vaccines are leaders of far-right groups or political parties, including People Party of Canada (PPC) leader Maxime Bernier.

“It is likely that many (if not most) far-right movements have latched on to COVID-19 conspiracy movements to lure anti-vaccine activists and conspiracy theorists to their cause. This includes adapting their propaganda and attending anti-lockdown protests and events,” the study says. Emboldened by this cause, the study wonders if the movement could return with previous far-right preoccupations with more vigour: “the promotion of anti-immigration, Islamophobic and antisemitic views and policies.”

The purple signs of the PPC, for instance, have been a common sight at the protests. This is a party that wants to force future Canadian immigrants to answer questions about “Canadian values and societal norms” in a face-to-face interview, repeal a non-binding motion condemning Islamophobia, and restrict the definition of hate speech in the Criminal Code. The party was founded in 2019 and in its submission to Elections Canada of 250 signatories, included a former leader of a U.S. neo-Nazi group and other far-right extremists. The same year, it ousted a candidate who was critical of the party’s refusal to denounce far-right groups.

The party holds a shocking 8 per cent support in the race, according to one poll. It has recruited an almost full slate of candidates (312 out of 338 ridings). Bernier (who was also egged on the campaign trail and has condemned physical violence) won 12 rounds of the 2017 Conservative leadership race, losing by a hair in the 13th round to Andrew Scheer. He’s calling for “a revolution” to defend freedom.

So, yeah, it matters. It matters so much, and Canadian leaders need to stop being so cavalier and rote in dismissing it by suggesting that this is “a minority” that we shouldn’t “bow” to.

These largely white groups of protestors that have followed Trudeau have an unfair privilege that has been afforded to them by all aspects of society: they largely get away with their hateful rhetoric and actions, and don’t get called out or punished for it.

Condemnations are not a cure for what we’re seeing unfold on the election campaign trail. (I’ve personally seen enough condemnations of hate to last a lifetime.) Erin O’Toole, condemned the “disgusting” act and called it “political violence” in a statement. That doesn’t address the fact that “race” or “racism” don’t appear once in the Conservative Party platform, or the fact that Conservative MPs have been stoking hate by refusing to even condemn it for the longest time. (Like that time they all voted against a non-binding motion against Islamophobia.)

The Liberals aren’t absolved either. They’ve been in power for six years and hate has grown under their watch. They could’ve done more after the 2017 Quebec mosque—the first terrifying manifestation of white supremacist hate in the country. Instead, they chose to table online hate legislation, the one big thing communities targeted by hate have been demanding, the day parliament adjourned this summer. The government just held its first-ever anti-hate summits in July, after parliament was already over, so any pledges made there won’t come to light for some time.

In the days since the rock-throwing incident happened, Trudeau has changed his tune and called it “unacceptable.” Perhaps this was a political calculation for sympathy votes or a realization that this was a way to differentiate his party from the Conservatives. Either way, it was, once again, a condemnation with no follow-up.

We need to see action, anger and arrests. (The London police say they are investigating the rock throwing.) Our leaders are quick to remind us that Canada isn’t the U.S., but the same alt-right, extreme rhetoric is loudly echoing here today and has done so for years.

Unfortunately, even under the strictest of societal lockdowns, the spread of hate has continued.

We had a year of anti-racism protests by the Black community. The Asian community was targeted throughout the pandemic. There seems to be a surge in incidents against Muslim communities. And just this week, Prabhjot Singh Katri, a 23-year-old Sikh international student, was murdered in an apparent hate crime in Truro, N.S.

Racism and hate are serious problems in Canada and the leaders are encountering both on the campaign trail. A plan to address racism and hate—and eradicate them—should be on the ballot. They should have been debate topics.

The absence of racism and hate in the 2021 election conversation is absolutely terrifying for a country that still refuses to look itself the mirror.

CORRECTION, Sept. 9, 2021: An earlier version of this story incorrectly stated that the word “hate” does not appear in the Conservative Party platform.