Tom Mulcair: For over a month, the Quebec government had been aware that long-term care workers were working between different residences. There is no excuse for inaction. 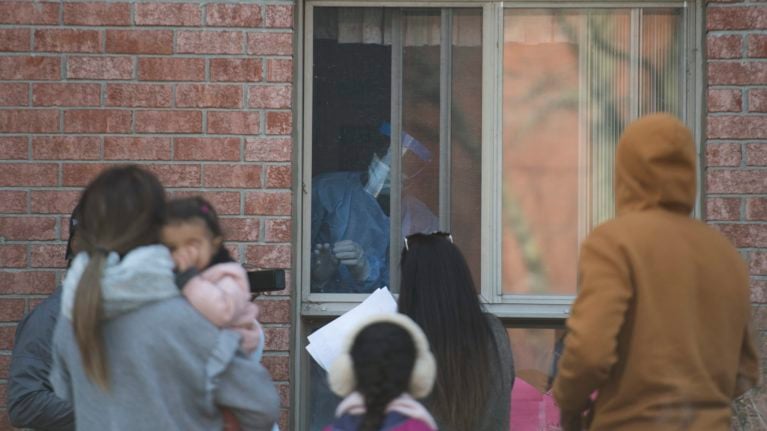 A health-care worker opens a window to a room at a long-term care home as family members of the resident look on in Montreal, on Apr. 25, 2020 (Graham Hughes/CP)

Montreal has the highest death rate of any major city in Canada from COVID-19. On May 5, Quebec’s public health director, Horacio Arruda, and the minister specifically responsible for seniors, Marguerite Blais, both pointed to the same cause: health care personnel were working at more than one facility, spreading the disease as they moved from site to site.

At a news conference on May 11, Premier Francois Legault confirmed that allowing part-time  personnel to go from one centre to another was a major cause of Quebec’s catastrophic record. The tragic truth is that the Quebec government had been well aware of the problem for over a month and had failed to act.

Health care is, first and foremost, a provincial jurisdiction. Very early on in this health crisis, it became clear that the patchwork quilt of rules, regulations and orders across Canada would mean that there would also be very different results in dealing with COVID-19 from province to province.

British Columbia’s high priestess of public health Bonnie Henry, quickly distinguished herself as the “A+” student in the current crop of officials trying to help us deal with the pandemic. She has been outstanding, and has helped John Horgan’s government outperform all others. British Columbia has also had some of the clearest, toughest rules in dealing with this health crisis, and as a result, can boast the best results among the large provinces.

Under B.C. law, her orders came into force the minute she spoke them. Even if they took a couple of days for the order to be lawyered up, they went into effect right away. As reports began to arrive from Europe in late March, showing that infected health workers had been major vectors for the spread of the disease, Henry was the first to act. She understood that moving staff from facility to facility could be a major problem and she put a stop to it. Her written order, making it illegal to work in more than one residence, was published a few days later on Mar. 27.

MORE: How prepared was Canada?

Both Quebec and Ontario acknowledged the problem that had been identified in B.C. In mid-April, Ontario finally enacted a similar prohibition against working at multiple sites. Quebec knew about the problem and talked about it constantly, but never formally adopted the rule.

Beginning in early April, Arruda, Minister Maguerite Blais, who is responsible for seniors and informal caregivers, and Health Minister Danielle McCann, gave a series of interviews where they spoke of the importance of prohibiting health personnel from working at more than one site. Tragically, an enforceable rule was never put on the books. And on Apr. 16, TVA provided documented examples of workers from highly-infected CHSLDs still being scheduled to work in other CHSLDs that had been COVID free.

Throughout the crisis, health service administrators have been quoted as saying that they don’t have to follow what a minister says at a press conference. As long as a rule hasn’t been enacted formally, promulgated and published, those health administrators would continue with existing practices. The practices included sending workers from CHSLD to CHSLD. In B.C., a health administrator was obliged to follow even spoken orders given by Henry. Arruda, Blais and McCann knew they had never created an enforceable legal obligation, and it has had disastrous results.

Some ministerial orders were in fact officially proclaimed into force in Quebec to help deal with the pandemic. For example, the rule against travelling from Ottawa to cottage country in Gatineau wasn’t advice, it was law. Which simply begs the question: why didn’t Quebec issue a formal rule banning transfers of personnel in the CHSLDs?

Perhaps part of the excuse is the death spiral itself. Once it accelerated, it was too late. The time Quebec lost by talking and doing nothing meant that there were already some 9,000 orderlies who had refused to work or had become ill. The ones who had no symptoms of coronavirus, continued to work at more than one place, which was catastrophic.

When François Legault brought in his anti-immigration policies during in his first year in office, he trumpeted, on va en prendre moins, mais on va en prendre soin. His oft-repeated rhyme translates as: “we’ll accept fewer, but we’ll take care of those we do.” Railing against the “mass” arrival of asylum seekers who crossed into Quebec irregularly had helped Legault get elected. Several news stories have pointed out that of the tens of thousands who crossed into Quebec, thousands went on to become trained as orderlies. Many of these migrants were single moms. The training period was short and a much-needed job awaited them.

The north of Montreal contains several large neighbourhoods like Saint-Michel and Montréal-Nord where recent arrivals have the chance to find an affordable place to live. The Haitian community in particular, received a large influx of new members. Most had gone to the U.S. after the devastating earthquake a decade ago, and fled to Canada when facing possible deportation under Trump. Hundreds of them were working as orderlies in the CHSLDs and many of them acquired coronavirus.

These densely populated neighbourhoods are now victims of the newest spiral. Plans to open up Montreal schools and businesses have had to be put on hold because of this massive new outbreak. These new arrivals are the ones who were providing the care promised by Legault, and Quebec has done anything but care for them and the others affected health workers. It’s a tragedy spawned by a tragedy.

Against the backdrop of this unfolding human tragedy in Quebec, Canadians asked if the federal government should play a greater role in the care for seniors. On Apr. 24, Trudeau addressed it in his daily news conference: “Perhaps we could reflect on whether or not seniors residences should be part of our health care system and be governed under the Canada Health Act,” he said.

At his own news conference later that day, Legault responded to Trudeau’s remarks by reminding the PM that the initial cost-sharing deal for universal health care was a 50-50 split between Ottawa and the provinces, though that had gone down to a mere 23 per cent from Ottawa in recent years. I’d be happy to see more, Legault quipped.

Shortly after Legault’s statements, a government source quickly confirmed that Ottawa has no plans to implement greater oversight in the care for seniors right now, but that it will be part of a greater discussion the federal government will have with the provinces in coming months. And on May 13, Trudeau walked away from the idea entirely. He shouldn’t have.

Under our constitution, health is mostly provincial jurisdiction but there’s nothing stopping Ottawa and the provinces from enlarging, updating and improving the universal health care deal signed in the 60s.

It’s 2020 in Canada, and hundreds of elderly, who built this great country of ours, have been allowed to die a miserable death. It’s a national shame. It is now a moral obligation to ensure that such an unforgivable tragedy never happens again. Once this crisis subsides, Ottawa and the provinces have the duty to work out a new agreement that includes care for seniors. It’s going to require hard work and goodwill, but there is no excuse for inaction.