Michael Coren: Faith should never guarantee a place in the public square, but nor should it disqualify someone, anyone, from participation 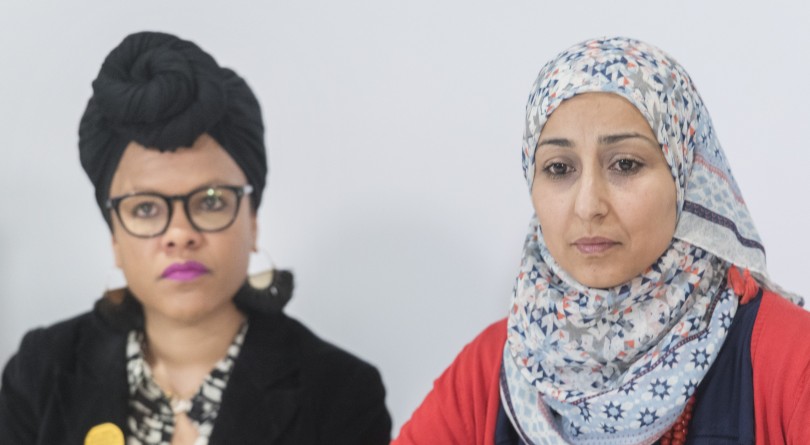 Marlihan Lopez and Safa Chebbi, who are part of a coalition to mobilize Quebecers against discriminatory legislation, speak during a news conference opposing Bill 21 in Montreal, March 29, 2019. (Graham Hughes/CP)

Next week I finish my Masters of Divinity degree at Trinity College, University of Toronto. For three years I’ve been studying the form, history, foundation, politics, language and philosophy of religion. I’ve mixed with people of almost all faiths, discovered much from and about them, and also been strengthened on my own religious path.

The academic study of religion does not make one naïve or credulous, and much as I love God, I’m extremely aware of the horrors committed, historically and in our own age, in the deity’s name. I also believe in the separation of church and state, which when implemented properly should benefit and protect both institutions. But the Quebec government’s proposed secularism law is repugnant and dangerous.

The Coalition Avenir Québec’s law will prevent public workers in positions of authority from wearing religious symbols such as a hijab, kippa or turban so as to, it claims, ensure “a balance between the collective rights of the Quebec nation and human rights and freedoms.”

Christians are hardly affected by this, partly because most Christians have no outwardly visible religious symbolism beyond perhaps a crucifix around the neck, which is not required, usually hidden, and frequently aesthetic or cultural rather than theological. The law will impinge upon some orthodox Jews, and Sikhs of course, but at heart and soul it is about Muslims.

There’s a whole stew of problems involved, but a half-dozen stand out as being particularly disturbing.

READ MORE: What Canada needs now is some positive conservatism

First, it’s a solution to a non-problem. Quebec faces all sorts of issues—it needs to increase employment, improve health care and build roads and houses. But teachers, judges or police officers wearing what is little more than a headscarf is hardly a pressing issue.

Second, whatever the proposal’s defenders may claim, their denial is shameless obfuscation. This debate has been going on for some years, and it always comes down and back to Muslim women. There is perhaps understandable concern about a full burqa, but such a covering concerns a tiny number of people. This, on the other hand, involves a sizeable number of Muslim women, often highly educated, who want to combine a lived faith with active citizenship and public duty.

They are now being told that they can’t. It’s also worth remembering that some Muslim women wear a hijab not because they’re specially devout but because they want to self-identify at a time of increasing anti-Muslim sentiment, ranging from the horrors of Christchurch and—lest we forget, Quebec City in 2017—to regular street insults. How darkly ironic that their statement against bigotry should be met with, well, bigotry.

The bill pays lip service to Jews and to a lesser extent Christians, but is about Islam. Mind you, Quebec Sikhs will certainly be harmed by it. It’s interesting that when Sikhs wanted to defend western civilization against Nazism, their turbans were welcomed, but the Quebec government thinks differently.

The strain and stain of Islamophobia runs deep in Canada, and arguably stronger in Quebec than elsewhere. A study last year from the Canadian Review of Sociology, for example, asked people to give various groups a rating between zero and 100 to indicate how they felt about them. Muslims did the worst in Quebec, at 56. The Montreal-based polling company CROP found in 2017 that 34 per cent of Quebecers believed that Muslim immigration should be halted, compared to 23 per cent in the rest of the country. That may be partly because Quebec, just like Ireland and to a lesser extent Spain, came out from under the shadow of Roman Catholic clericalism and reacted harshly to anything seen as overly religious. The backlash infects all faiths, but the one that seems to be most obvious today is Islam, and thus this draconian response.

Third, this plays into the hands of the jihadists, who insist that Muslims will never be accepted in non-Muslim society, that the west is fundamentally Islamophobic, and that no Muslim should cooperate with non-Muslim governments. The Quebec government has argued that the bill would make society safer and more unified, when in fact it may achieve the very opposite. It alienates mainstream Muslims—who form the vast majority within Islam—and will likely see an increase in religiosity.

Fourth, this is not secularism but populism. Secularism is supposed to be about neutrality rather than dominance. Refusing to allow, for example, a Christian or Muslim police officer or teacher to try to proselytize when on duty is fundamentally different from banning that person from wearing a religious head-covering that does not in any way interfere with their work or hinder them when dealing with the public.

Fifth, the Quebec left has got this legislation terribly wrong when so many of its adherents support it. Their enthusiasm for what they see as secularism is misplaced, and the argument that this somehow liberates women and is feministic is startlingly paradoxical. Of course there are women who are oppressed in Islam, just as there sometimes are in other faiths, but it is common for younger Muslim women to adopt the hijab not because of but in spite of paternal and patriarchal influence. It’s often a sign of independence and even defiance, and non-Muslim leftists have no more right than anybody else to impose their views. White saviours speak French too, you know. Politics isn’t linear, and it won’t be the first time that ostensible progressives have allowed populism to infect their ideology.

Sixth, religion does in fact have a place in public life—as the work of food banks, hospitals, activist movements and the like have shown. William Wilberforce’s fight to end slavery, Lord Shaftesbury’s campaign against child labour, Martin Luther King’s struggle to expose and combat racism, Tommy Douglas and public medicine, down to the night patrols feeding the homeless, the hospices, and addiction drop-in centres that I see every week in contemporary Toronto.

Faith should never guarantee a place in the public square, but nor should it disqualify someone, anyone, from participation.

There will be opposition. It will come politically and legally, from unions and churches, and will likely become an international issue. I should think that some non-Muslim women will wear hijabs in solidarity, and that disruptions will take place. But the government is popular and so is the premier. He has the majority, and thus the power and right to govern. But having the right is not the same as having the duty or the responsibility. That lesson should have been learned a long time ago.