Ahmed Sahi: The province's religious symbols crackdown will have dangerous repercussions across Canada as it sows fear, division and the erosion of fundamental rights 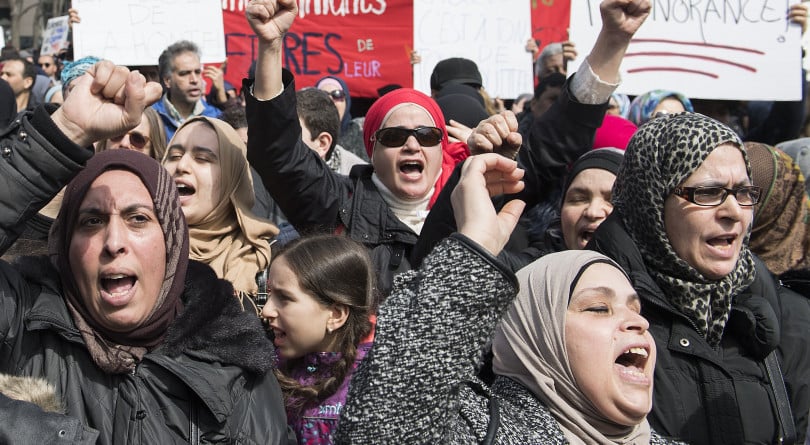 People gesture during a demonstration in Montreal, Sunday, April 7, 2019, in opposition to the Quebec government's newly tabled Bill 21. (THE CANADIAN PRESS/Graham Hughes)

The veil is not a religious symbol, it is a tenet of faith. It is not a piece of cloth, it is a deep-seated conviction. And choosing to wear it or not, is not a wardrobe decision; it is a question of conscience.

For so many Muslim women who wear it every single day, it goes to the core of who they are and what they believe in. So it is for the Kippa, turban and other instruments of devotion, adopted by people of different faiths.

How can the provincial government in a country that is a global model for individual rights and freedoms table a bill that flies so flagrantly in the face of such fundamental human rights as freedom of conscience?

Shortly before Bill 21 was tabled late last month in Quebec, Prime Minister Justin Trudeau, summed it up pretty plainly. “It’s unthinkable to me that in a free society we would legitimize discrimination against citizens based on their religion.”

That’s more like it; a Canada we can actually recognize. But that’s a far cry from what the government in Quebec is working towards.

Bill 21 would ban public employees, including teachers, judges and police officers, from wearing symbols of faith. It is not only a violation of freedom of religion, as guaranteed by the Canadian Charter of Rights, it also takes Canadians backward in terms of women’s rights and the rights of minorities, undermining the very purpose of the Charter.

But alongside all the gross violations of human rights, is the concurrent, burning issue of what this does for the social and political climate in Quebec, and by extension, in Canada.

The tabling of this bill at any time would be controversial and damaging to social cohesion, pitting—within Quebec—a white majority against religious minorities. Outside Quebec, in Canada at large, the bill signals that it’s okay to harbour, foster and even legitimize xenophobic thoughts and policies. Essentially, the tabling of Bill 21 empowers populist and far-right nationalist thinking.

But given the timing of it, just a couple weeks after the New Zealand attacks at two mosques, in which 50 Muslims were killed at Friday prayers by an anti-Muslim extremist xenophobe, this is a grossly tone deaf move.

It’s not about secularism, it’s about votes and white Quebec’s ‘neutralization’ of its visible and religious minorities. How exactly does this improve Quebec? You know something is all about politics when it does absolutely nothing for people’s livelihood, education, prosperity or quality of life.

In New Zealand, following the attacks, the reaction was for the women in the country to wear the hijab in solidarity with Muslim women, on what essentially became a national day of mourning. In Quebec, the government banned the veil.

Given the context, that Quebec was victim to its own Mosque attack just 2 years ago (an unprecedented terror attack on Muslims in Canada, by a right-wing extremist), it’s clear that this was a horrible time to bring forth such a bill. It’s also clear that the Quebec government does not care.

In Quebec, this is an important moment. To ignore it is to allow populist politicians to continue playing politics with religion and faith, because it’s not just about votes anymore, it’s about people’s lives. The most dangerous aspect of the CAQ’s tabling of Bill 21 is that rather than wait for the bill to be rejected/overturned/struck down on the basis of human rights guaranteed under the Charter, the QAC has pre-emptively raised the “Notwithstanding” clause, essentially acknowledging that its proposed (and preposterous) religious symbols ban violates the Charter of Rights.

In the past, xenophobic ideas and legislation have sparked bitter and important debate, as well as court proceedings. Take the niqab citizenship ceremony ban in 2011. The Tories said they believed the ban respected the Charter. It was eventually struck down as unlawful by a Federal appeal court. And that was that.

Similarly, after the government of Quebec passed Bill 62 in 2017, the “religious neutrality law” which bans people from wearing face coverings (niqab, burqa etc) while receiving public services (including even riding the bus), the Quebec Superior Court suspended the bill, stating that it discriminates against Muslim women. Justice Marc-André Blanchard ruled it to be “a violation” of the Canadian and Quebec Charters, which “provide for freedom of conscience and religion.”

Outside of Quebec, the notwithstanding clause has very rarely been used by any provincial government, in part because the Charter is so well respected, considered sacrosanct almost—as it should be in a secular society based on individual rights and freedoms. The Charter has always been a security blanket against bad laws, as governments that violate it must be prepared to face voters when they do.

But that safety assurance has been removed in this case. In Quebec, the law will not save us from this slippery slope of fear, division and the erosion of fundamental rights. That means it is only the people of Quebec who can save us, because all of this is ultimately being done for them; to make them happy. It is an important moment for the people of Quebec, for whom this is not a question of culture, but a question of conscience—the outcome of which will reverberate throughout the world.

Remember, there was one name engraved on the rifle used by the terrorist in Christchurch: “Alexander Bissonnette”. What we do here, has global consequences. The people of Quebec need to stand up now.