Pam Palmater: The only people who should be shocked are First Nations. How many times must they fight the same battles for well-established rights? 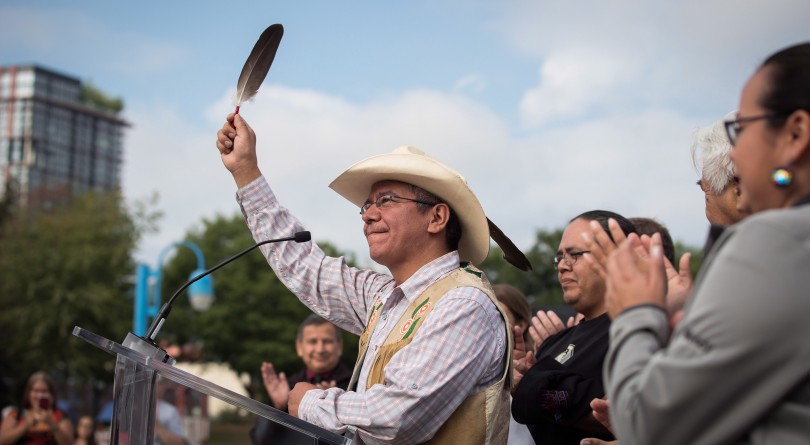 The Federal Court of Appeal’s decision quashing the federal government’s approval of the TransMountain pipeline project sent shock waves through federal, provincial and corporate boardrooms. The alarmist analysis in the last 24 hours from mainstream commentators fueled by the tortured cries from extractive industry representatives and the desperate reactions from Alberta Premier Rachel Notley and federal Finance Minister Bill Morneau, would make one think Canada was in a state of emergency. But wait, the province of British Columbia is in a state of emergency, as hundreds of fires burn due to effects of climate change. But we didn’t see this kind of dramatic reaction to the very real and present crisis in B.C. Does Canada truly care more about the profits from dirty oil than the health, safety and well-being of Canadians, First Nations, killer whales and the entire ecosystem upon which we sustain ourselves?

It is important to put this decision in perspective. The court did not say that no economic development project can ever be approved again. Nor did it say that the federal government is now stripped of all its powers. This decision was very clearly about the legal responsibility of Ottawa to respect the Aboriginal rights of First Nations by engaging in meaningful consultation—not just listening to concerns, but taking substantive steps to address or mitigate them. First Nations have had to litigate literally hundreds of Aboriginal rights cases to get the same kinds of rulings over and over again. The problem isn’t about a lack of clarity on consultation—it’s a failure by governments to do it. Trudeau said many times this project was going ahead despite First Nation concerns—no evidence would have made a difference.

RELATED: The Liberals own the Trans Mountain court loss as surely as they own the pipeline

So there shouldn’t be so much shock. This case is clearly in line with the direction from the Supreme Court of Canada (SCC), which has held many times that federal and provincial governments must engage with First Nations in good faith, and that consultation is more than the mere distribution of information or taking notes about First Nation concerns. It includes accommodating and actually mitigating those concerns. In some cases, it also means getting the consent of the impacted First Nations. Yes, that is in fact the law in Canada. In the Tsilhqot’in Nation decision in 2014, the SCC held that where First Nations hold Aboriginal title (a type of Aboriginal right), governments can avoid infringing on Aboriginal rights by obtaining the consent of the impacted First Nation. Specifically, they held:

It is very clear from this case that the government has to do more than listen. Many First Nations in B.C. have Aboriginal title to their lands. Take the Tsleil-Waututh, for example. They asserted Aboriginal title to the land, water, air, marine foreshore and resources in Eastern Burrard Inlet. Consent is clearly required here. The only people who should be shocked by this whole situation are First Nations. Although our rights are inherent (they existed prior to the creation of Canadian state); and they are both constitutionally and internationally protected; they are still “honoured more in the breach” than in the observance. First Nations have spent decades and millions of dollars re-proving our rights in court. Fourteen years ago now, the SCC in the Haida Nation case specifically told Canada that it has an obligation to act honourably in its dealings with First Nations, even if their rights have not been strictly proven in court:

… the Crown, acting honourably, cannot cavalierly run roughshod over Aboriginal interests where claims affecting these interests are being seriously pursued in the process of treaty negotiation and proof. (emphasis added).

Yet, it is not the federal government or the extractive industry that is on the defensive right now —it is First Nations. This is despite that fact that it is First Nations whose rights have been systematically breached.

The collective of B.C. First Nations who defended their claims at the Federal Court are the same ones who tried for a very long time to get government to meaningfully consult with them. First Nations don’t want to spend millions on litigation when those funds could be spent on nation-building. At a time when the government should have been acting in the best interests of Canadians, First Nations, killer whales and our entire ecosystem, they focused exclusively on corporate interests and their own political agendas. Federal and provincial governments should be celebrating that the appellate court upheld Canada’s constitution and the Aboriginal rights protected within section 35. Instead, it seems they are trying to figure out how all of this impacts them personally and politically. What does this mean for the next federal election? Is this a sign that Trudeau can’t deliver? Is this good for the Conservatives? What about Alberta’s NDP? Is this the death knell of their time in office?

These are all ridiculously self-centered and irresponsible considerations. The B.C. First Nations who defended their rights did more to stand up for Canadians and our environment than Canada’s own Prime Minister. Reconciliation with Indigenous peoples seems to be okay so long as it is limited to tearful apologies, a national day of recognition or a few name changes on government buildings. But when reconciliation requires governments respect constitutionally-protected Aboriginal rights—then all systems launch into panic mode. Commentators have referred to the requirement for meaningful consultation where Aboriginal rights are concerned as “holding the government hostage”—very negative and alarmist language implying catastrophe if immediate action isn’t taken. A bit dramatic considering the atrocities committed against First Nations and the ongoing violation of their basic human rights, let alone their specific Aboriginal rights.

Reconciliation is about adjusting the relationship so that it is more just and better reflects the constitutional status of our rights—that is clearly painful for those governments and industries who had a free ride until now.

RELATED: Trans Mountain and First Nations along the pipeline route: It’s not a dichotomy of ‘for’ or ‘against’

Prime Minister Trudeau campaigned on a promise of renewed relations with First Nations and in particular, a relationship based on the respect for Aboriginal rights. He promised to implement the United Nations Declaration on the Rights of Indigenous Peoples (UNDRIP) which is the international standard that requires free, prior and informed consent of Indigenous peoples for any development on their lands. He also promised to conduct a complete review of federal laws to ensure they were section 35 compliant. Had he actually done what he promised, none of us would be talking about this case today. Had he lived up to his promise that he would respect the First Nations right to say no to development on our lands—we wouldn’t have needed this court case.

Instead, Trudeau pledged to forge ahead anyway and Rachel Notley threw a temper tantrum threatening to pull out of Canada’s climate plan. Maybe this case offers another blessing in disguise—the revelation of those who shouldn’t be in power. Either way, my faith is in First Nations and our Canadian allies who are willing to put their own needs aside and sacrifice their own time, money and possibly freedom to defend the health and well-being of all our future generations. Like the court said, Aboriginal rights and the public interest are not in conflict. To the contrary, when Aboriginal rights are upheld, it is good for everyone.