Run, John Baird. For the love of God, run.

Andrew MacDougall: It wouldn't be easy, but Baird's entrance would give a stale Conservative leadership race the shakeup it so badly needs 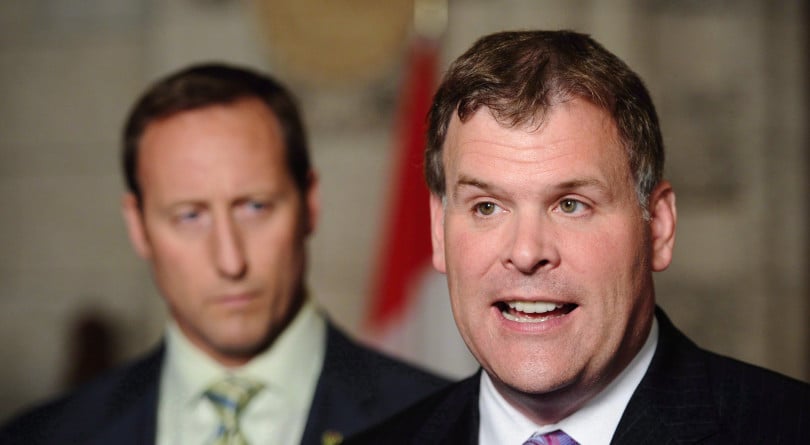 Baird and MacKay, speaking to reporters in the foyer of the House of Commons in June 2011 when both were federal ministers (CP/Sean Kilpatrick)

The thing about politics is that, once infected, it never really leaves the blood.

The residual fever is why I write about what I used to practice. Opining about politics gives me an excuse to follow politics without ever onboarding the huge opportunity cost of actually getting back into politics.

Which brings us to John Baird.

The Ottawa rumour mill is currently chockablock with Baird-for-Leader buzz. The team of magi behind the preemptively spiked Pierre Poilievre bid are apparently now lining up behind his former mentor. Even Baird himself has said he’s now “taking calls” and “weighing…options”. In other words, the former foreign, environment, transport and Treasury Board minister is now looking at his remunerative and relatively easy private sector life and wondering whether the pain of public office is worth it. And as Rona Ambrose’s recent decision to stay out tells us: it’s a tough call.

To which I say: THROW CAUTION TO THE WIND AND RUN, YOU MAGNIFICENT BASTARD!

Ok, on se calme. Baird is not a panacea. On outlook, Baird is remarkably similar to Peter MacKay and Erin O’Toole, the other top-shelf candidates currently in the race. It’s not like Friedrich Hayek would be coming down from on high to get classically liberal on this race’s ass. But a Baird entry would inject some flavour and pace.

It would also add a pretty solid record of achievement in government. Lest we forget, Baird shepherded the Federal Accountability Act through Parliament, giving the nascent Harper government an important early win. He then went in and plugged the Rona Ambrose-sized hole in the Environment department after Ambrose failed to impress. Baird also got billions of infrastructure money out the door in the wake of the financial crisis without any signs of it being misspent, something the current infrastructure minister would love to be able to claim. And Baird more than held his own against the bureaucratic blob at Fort Pearson as foreign minister, faithfully transmitting the Harper government’s canapé-choking views far and wide.

Indeed, Baird was widely seen as the Harper government’s ‘fixer’ and most ardent defender, which is probably why Andrew Scheer and the Conservative Party tapped him to lead a review of the last election and the party’s four-cylinder performance in it. Being the tip of that spear gives Baird a unique advantage should he enter the race to replace Scheer; he has already done the listening exercise the other candidates are now trying to do and—at least one would hope, anyway—absorbed the relevant lessons.

Not that this makes Baird bulletproof. Far from it. Among other things, a return to public life would give news outlets license to peek into every corner of Baird’s post-politics life. Remember that bizarre intervention on Saudi Arabia’s behalf from a few years ago? Well, Baird’s opponents and the press corps surely do. And then there are all of Baird’s high-profile board appointments to pick through. And then there’s the #MeToo filter, which would surely be applied.

There’s also the broader political mood to consider, which has shifted a ton in just four short years. Just ask Joe Biden how hard it’s been to conduct a feel-good comeback tour. Audiences are now more polarized than someone with Baird’s political malleability have had to face previously. Pragmatism is out, and rigid ideology in. If Baird does jump back in he’ll need a stack of solid ideas to stand on.

As you can see, the roadblocks to public participation are quick to add up, with the potential benefits slower to appear. That’s where the infection comes in; Baird is a political animal. No matter how much fun he’s been having minting himself in the private sector it’s no substitute for the power and ability to get things done in government.

More to the point, a lane is now open. Trudeau is drifting through the early days of his second term. Protests and problems are piling up across Canada. And the other opponents in the leadership race are beatable. It’s prime time for someone with ambition to come give this race a kick up the backside.