Jen Gerson: Shattering the illusion of celebrity has pushed the self-effacing Canadian’s star even higher during the pandemic 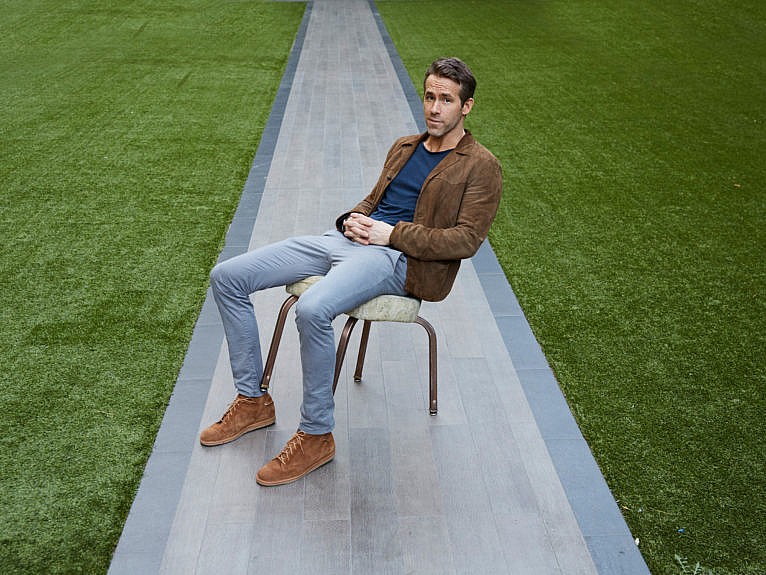 As other celebs flaunt their luxury lockdowns, Reynolds is using his influence for good (Magdalena Wosinska/The New York Times/Redux)

Ryan Reynolds is one of the few celebrities whose email address can—allegedly—be found on the internet by those with the audacity to Google. I had reasonable questions about the authenticity of the address, but to check the matter, I sent him a note.

“Hello, I am currently out of the office in celebration of my birthday. It is not yet a national holiday in Canada so I am spending the next month intensely lobbying for the effort. I will return your email when I get back. In the meantime, please enjoy this holiday card the team and Mutant 101 made for me. It’s . . . okay? If they knew how much I hated the sound of my own voice, they would have gone in a different direction but I guess it’s the lack of thought that counts.”

We’ll see if he gets back to me in the coming weeks.

For those who may not be aware of the 44-year-old Canadian actor best known for marrying Blake Lively and starring in Deadpool and Deadpool 2, Reynolds is, well, that actor. He is also the only Canadian actor worth a damn in the era of COVID.

Yes, Ryan Reynolds is the quasi-hero we can all tolerate right now.

He and his production company created an ad for a matchmaking app in which Satan meets his match made in hell—the year 2020. The ad went viral for reflecting the perfect awfulness of those 12 months for all of us who aren’t celebrities.

But he’s done more than make us laugh: he’s put his talents to use, responding to a call by B.C. Premier John Horgan to encourage the generation of whatever-stupid-title-young-people-are-called-nows to stay home. Reynolds noted that B.C. was “home to some of the coolest older people on earth,” like David Suzuki—and his own mother.

“My mom, she doesn’t want to be cooped up in her apartment all day. She wants to be out there cruising Kitsilano Beach looking for some young, thirtysomething Abercrombie burnout to go full Mrs. Robinson on. She is insatiable,” Reynolds said in his recording. “But here’s the thing: I hope that young people in B.C. don’t kill my mom or David Suzuki—or each other. Like, let’s not kill anyone. I think that’s reasonable.”

Though Reynolds no longer lives in Vancouver, he keeps “VanCity” in his Twitter handle and takes an interest in his hometown affairs.

Reynolds is the kind of guy who does ugly sweater fundraisers for SickKids. He recently offered $5,000 to anyone who returned a stolen teddy bear that housed a recording of its owner’s late mother.

The bear was, indeed, returned.

He stars in commercials for his own cellphone company that feature audio of his customers shocked to get a call from Ryan Reynolds.

If there is any man who actually has an unkind word to level against Reynolds, that man is Hugh Jackman; and then only because the pair has developed a fake rivalry that has escalated into an inside comic-book-movie joke.

Since COVID-19 began, most celebrities have been busy letting their asses hang out while the rest of us hunker down for maddening lockdowns in tiny homes and apartments. Kim Kardashian held a birthday party on her private island. She then tweeted about it, including full glamazon-style pictures of her legion of doe-eyed, chin-jutting “friends.”

“After two weeks of multiple health screens and asking everyone to quarantine, I surprised my closest inner circle with a trip to a private island where we could pretend things were normal just for a brief moment in time.”

READ: Our expectations of celebrities have changed. Can stars keep up?

Or how about that time Gal Gadot and her 20 besties thought that what the world really needed right now was an Instagram rendition of John Lennon’s Imagine?

People like Sam Smith and Drake posted faux-humble moaners about their lives in lockdown featuring multi-million-dollar mansions and full-sized basketball courts. There were “profound” messages of support from celebrities on yachts, and in bathtubs littered with rose petals.

It was as if none of these people seemed to understand that the plebeians were no longer interested in aspirational lifestyles when the aspirations had become impossible to achieve. In an ordinary moment, the grotesquerie of the celebrity lifestyle is a form of fantasy entertainment; in the face of a genuine crisis, the show morphed into a cruel and bitter tease.

And yet, celebrities—perhaps less equipped than the rest of us to put a temporary end to their online attention- and validation-seeking—could only respond by showing Instagram clips of themselves revelling in the luxury cake long denied to the rest of us.

One can plausibly accuse Reynolds of the same addiction. A celebrity whose impulse was to lay low would be bad at his job, no?

But at least the guy used his showiness to good effect and cause. He seems to have some grasp of what the rest of us are actually experiencing, even if he’s likely empathizing from a multi-million-dollar enclave filled with whisky, gin, private ventilators and the company of erudite beauties while hermetically sealed from zombie-riddled norms.

(Also, did you know that Reynolds was engaged to Alanis Morissette? And that he appeared on The X-Files and Sabrina the Teenage Witch? He was like the generic muzak extra of my early adulthood.)

I’ve written that 2020 is the Year of the Apocalypse, although we have long misused that word. Apocalypse doesn’t mean “the end”; it hails from the Greek apo kalypti—to uncover. The apocalypse is the revelation. Now, if that revelation often precedes an ending, then we can forgive the conflation of the two words over time. Once seen, some things cannot be unseen, and we cannot go back to the people we were when we knew less about the nature of the world around us.

Fitting, then, that the celebrity who seems to have ridden COVID-19 to even greater fame and acclaim is an actor like Reynolds; a hometown boy whose comedy stylings rely on breaking the fourth wall. In short, he shatters the illusion of celebrity by looking at, and speaking directly to, the audience through the camera. This creates a sensation of intimacy with a figure who is otherwise totally inaccessible and remote.

Of course, this is no less a fantasy than the one the Kardashians craft with their images of #blessed excess. Ryan Reynolds does not actually put his email address on the internet (I think). But I still like the guy, despite myself. And perhaps that closeness, connection and realness is the fantasy we need right now.

This article appears in print in the February 2021 issue of Maclean’s magazine with the headline, “A Ryan for our time.” Subscribe to the monthly print magazine here.