A diploma with the wrong name

Waubgeshig Rice: We knew that succeeding at Ryerson University, named after a man who would have never wanted us there in the first place, would be the ultimate educational triumph 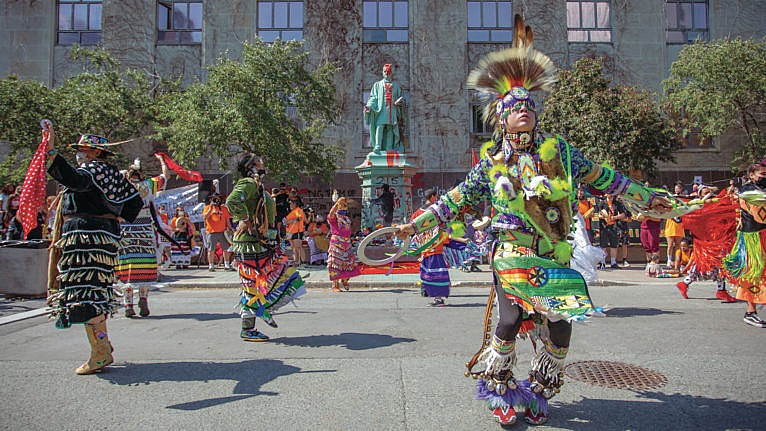 Activists protest Egerton Ryerson on Ryerson University campus on June 6th, 2021. Ryerson was the chief superintendent of education for Upper Canada and is considered instrumental in the design and implementation of the Indian Residential School System. (Nadya Kwandibens/Red Works Photography)

Waubgeshig Rice grew up in Wasauksing First Nation and is now based in Sudbury, Ont., where he’s working on his forthcoming novel, Moon of the Turning Leaves.

My reaction to the image of the fallen statue surprised me. I was stunned to see the green, metal likeness of Egerton Ryerson splattered in red paint supine on the stone sidewalk of Toronto’s Gould Street. It was a scenario I had fantasized about some two decades earlier when I walked the same street as an undergraduate student at his namesake university, gazing upon his bronze statue in revilement rather than the revelry the white authors of Canadian history afforded him.

To believe, I had to see video. So I searched Twitter and in seconds I saw the moving pictures of a cable tied around the metal sculpture’s head, pulling it to the ground. It bounced on the stone and came to a rest, and when I heard voices cheer, I exhaled. I didn’t feel elation or victory. Instead, I felt relief and, strangely, a sense of closure. I once again saw Indigenous people taking matters into their own hands to challenge and reverse the inhumane measures imposed upon them by people like Ryerson, resistance that has inspired me my entire life.

My formal educational journey began and ended at institutions named after Egerton Ryerson. I grew up in Wasauksing First Nation on Georgian Bay, where the community school used to be called Ryerson Indian Day School. Children attended junior and senior kindergarten there, and then went on to Grade 1 in nearby Parry Sound, Ont. By the time I began in 1983, it was a day school in name only; the band had assumed control, and it no longer served as an assimilationist tool of the Indian Act where children were punished for speaking their language or practising Anishinaabe culture.

At that young age, I knew who Ryerson was, but my parents only described him to me as a prominent figure connected with education in Ontario. As I got older, they carefully told me about residential schools, and his influence in creating them. Only a handful of people in my extended family were forced to attend the vile institutions, but as a child, I was well aware of the damage that system inflicted upon the families in our community, and beyond.

Wasauksing built a new school in a new location by the time I entered Grade 5 and named it Wasauksing Kinomaugewgamik, the word for school in Anishinaabemowin. It was a new beginning that erased Ryerson from our education, proudly making space for Anishinaabe practices and knowledge. Our teachers made time for visits from Elders, land-based teachings like medicinal gathering, and daily Anishinaabemowin classes. Our learning was scholastic resistance against the regime Ryerson helped create.

But his name surfaced again when it came time to choose a post-secondary path. I wanted to go to journalism school, and was accepted at the university named after him, and at Carleton University. It was a tough decision, but ultimately I wanted to be in Toronto, mostly because it was closer to home. I had to reconcile that with once again attending an institution that bore the Ryerson moniker. Being Indigenous in Canada means weighing the contradictions of simply trying to exist in a state that wants to erase your culture and history.

I moved to Toronto in the fall of 1998. I soon met other Indigenous students with the same experiences and perspective as me. In what was then called the Aboriginal Student Lounge in Jorgenson Hall, we talked about Ryerson’s traumatic legacy regularly, and we were united in our resolve to succeed despite him and his racist efforts. We knew that succeeding at a university named after a man who would have never wanted us there in the first place would be the ultimate educational triumph. I graduated with a journalism degree in 2002.

In the years that followed, I watched from a distance as the university publicly wrestled with Ryerson’s infamy, which accelerated in the recent Truth and Reconciliation era. Arguably, the results of those discussions became mere platitudes, and many in the Indigenous community within the institution became frustrated enough to strike the name from their official titles and communications. Students wrote an open letter proclaiming it henceforth X University; as an alumnus, it’s an initiative I wholeheartedly support.

Finally, this past spring, people at the grassroots removed the Ryerson statue from its perch, provoked by the revelation of hundreds of unmarked graves at residential school sites. The university administration promises it won’t be restored.

The toppling of another statue of a historic Canadian figure prompted the usual tedious cries of erasure and vandalism from colonial apologists. But those attempts at moral debate are always pointless when weighing vandalism against the kidnapping, rape and death of Indigenous children that proliferated as a result of the residential school system that Ryerson and others helped create.

So when X University does finally change its name, as it should, I expect the administration to mail me an updated diploma with the new name, free of charge. It’s the least an institution named after an architect of genocide can do.

This article appears in print in the August 2021 issue of Maclean’s magazine with the headline, “A diploma with the wrong name.” Subscribe to the monthly print magazine here.