…And here’s what they thought 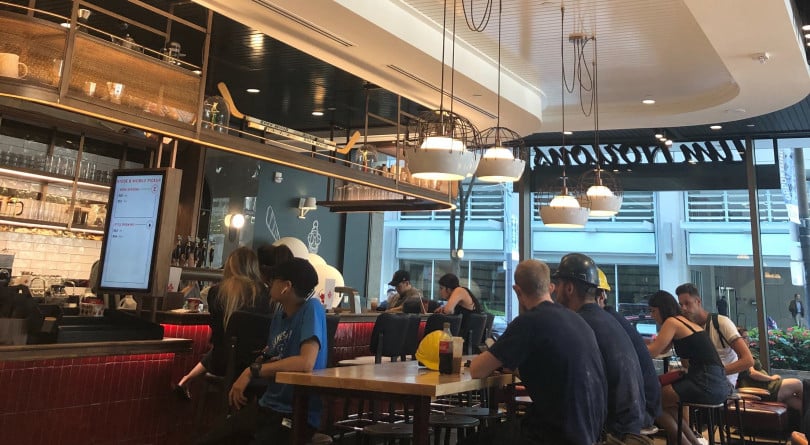 On Jul. 25, Tim Hortons opened up its new Innovation Café in Toronto’s financial district. “The restaurant is a modern interpretation of the Tim Hortons brand,” they wrote in a press release. “A unique space to test new menu items and technology initiatives.”

Upon the opening of this café, we asked ourselves: Is Tim Hortons trying to appeal to millennials? Do they think this is what millennials want? So we gathered six millennials and shipped them there.

Here’s what they thought: 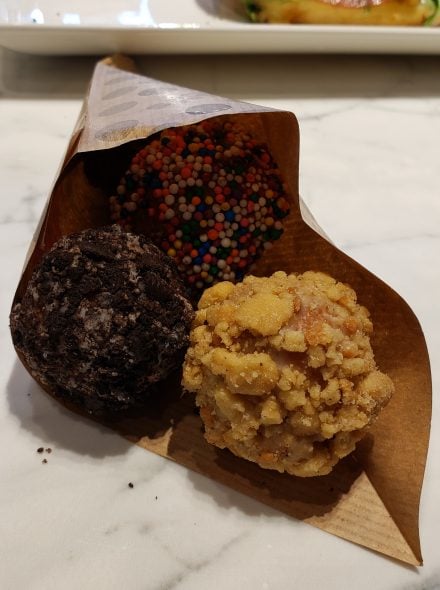 What I ate: ‘Dream’ Timbit quartet in a cone

What I drank: salted-caramel iced capp

What I thought: Timbits are Canada’s most shareable fast food, great equalizers for peckish cubicle mates and blue-collar working joes alike. If you like a dough-forward snack that costs less than a loonie for more than you can eat in a sitting, odds are you appreciate a Timbit. They lack flash; they eschew panache. Or, rather, they did. The bite-sized ‘bit gone luxe, the ‘Dream’ Timbit, whisks an unsuspecting customer into a world in which common snacks can taste like a fancy night out. The chocolate truffle is the uber-decadent cousin of a typical chocolate glazed; you’ll never go back. The Birthday Explosion is business as usual on the outside, but surprise hazelnut cream at its core. Just don’t pair these everyday delicacies with a salted-caramel iced capp, which comes served with an over-sauced whipped topping that jams the radar of even the sweet-and-salt-loving tip of the taster’s tongue. At $1.69 for a four-pack (served in a paper “cone”), Dreams aren’t cheap. But isn’t the best Timbit you’ll ever have worth a little more? 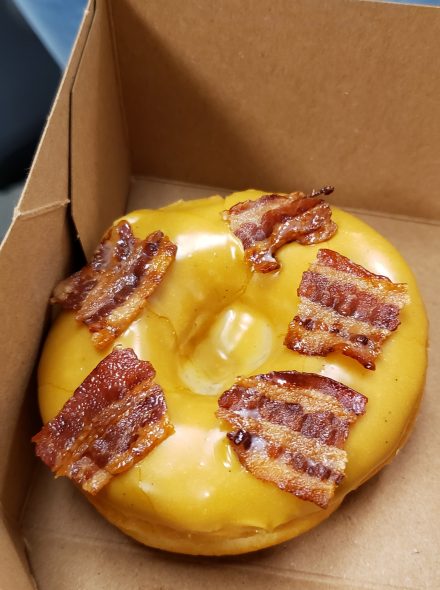 What I ate: maple-bacon ‘Dream’ doughnut

What I drank: nitro-infused draught latte

What I thought: The nitro-infused draught latte is, according to Tim Hortons, “a cold brew coffee layered with milk for a silky and smooth texture.” If this sounds like a mash-up of millennial-targeted buzzwords to you, then we’re on the same page. The drink is mostly a gimmick: an unseen jug of sweet java that’s poured from a draught. The ‘nitro-infusion’ gave the drink a crisp, thirst-quenching quality (if milky, coffee-soda is the kind of thing you like). I’m indifferent though—I guess I’d have it again. The maple-bacon ‘Dream’ doughnut is the ‘gourmet’ version of Tim’s original maple-dipped doughnut save for five pieces of candied bacon sitting on top. Presentation wise, it looked far superior…until I tasted it: same as the original but with a hint of meatiness. (Tim’s must’ve found out that millennials will eat anything so long as its topped with candied bacon.) The real disappointment was that the dough of the ‘Dream’ doughnut wasn’t an upgrade, and just as doughy as what you’d find at your regular, corner Tim’s. 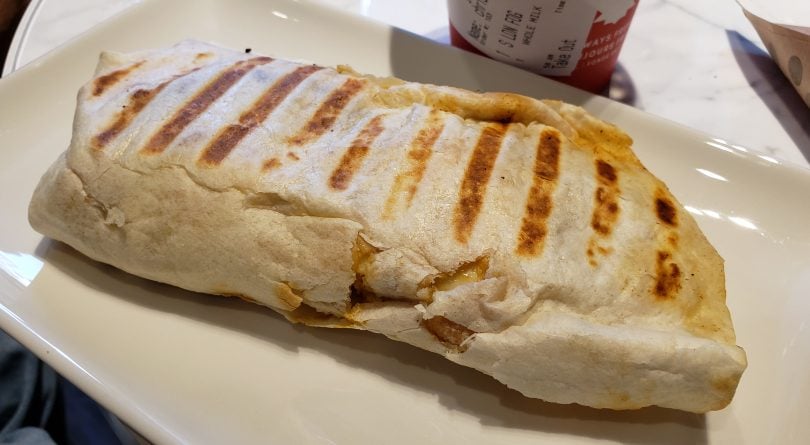 What I ate: Beyond Sausage Farmer’s Wrap

What I drank: London fog

What I thought: How does one define food? For some it’s energy, a means to an end. For others, it’s enjoyment, an everyday pleasure. I don’t often think of what my definition of food is. Except today’s not a regular day: today, I’m at Tim Hortons Innovation Café chomping on a Beyond Farmer’s Sausage Wrap and sipping on a London fog…and by God, both are measly. Let me say that I have nothing against meat substitutes. I’m that person who will order a veggie burger at the neighbourhood pub if I somehow feel like I’d eaten too much meat that week—bring on the pea protein! So it’s not the Beyond in the Beyond Farmer’s Sausage Wrap that I detest so much, it’s everything else—the neon cheese, the stale wrap, the hash brown filler. All of those textures just to disguise the fact that it’s all just one big vertical blob of salt. As for the London fog, I get why Tim’s had to do it—London fogs were a Canadian invention, you know? But as my dad says, if you can’t do it right: don’t do it at all. 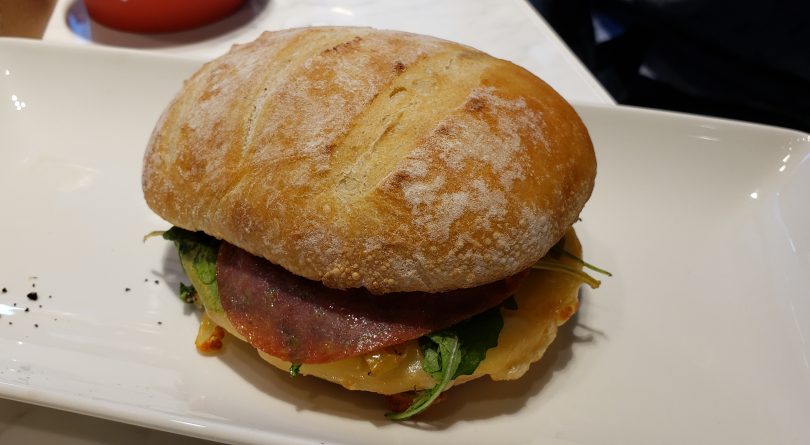 What I ate: Italian muffuletta sandwich

What I drank: nitro-infused cold brew

What I thought: I love cold coffees. I’d take a caffeinated beverage dripping with condensation over a warm one any day of the week. The nitro cold brew looks pretty delicious; there’s a creamy layer of foam at the top that’s comparable to some of the city’s hipster cold brews, and it’s surprisingly smooth, too. But if you’re familiar with everything else Tim’s has to offer, the flat coffee here won’t surprise you. (It’s certainly no single-origin cold brew.) On the flip side, it doesn’t cost much. I’m a Tim’s loyalist when it comes to their sandwiches and wraps—the bacon biscuit and chicken ranch wrap are my go-tos. And I’d still choose them over the Italian muffuletta, which was eight bucks. It wasn’t terrible, but there are arguably better ‘Italian’ options elsewhere. The presentation, however, really surprised me: the sandwich came on a plate! What can I say, I appreciated the plate (I’m all for reducing waste). Full disclosure: I did not finish the sandwich. 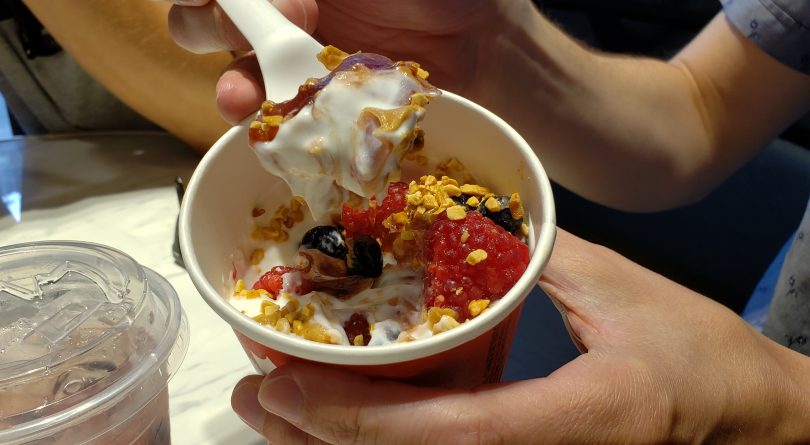 What I drank: blueberry and lavender hand-crafted iced tea

What I thought: If I’m in a time crunch to start the day, breakfast at home will typically consist of a bowl of Greek yogurt, topped with some granola and fresh fruit—often raspberries or blueberries—with a dash of maple syrup. Needless to say, when I saw that the Tim Hortons Innovation Café menu had the exact same thing, only with added dollops of peanut butter and jelly, my first thought to mind wasn’t “innovation!” Here’s the thing about innovation: customer expectations are high. In the tech world, innovation is a foldable smartphone or a 146-inch TV screen dubbed “The Wall.” On the barbecue, innovation is veggie burgers that simulate the look of red meat patties on the grill by “bleeding” beet juice. Adding some spreads to a yogurt bowl doesn’t really break any barriers. But then again Starbucks doesn’t have a PB&J yogurt on their menu—and I might just start doing this at home—so maybe Tim’s is onto something. Meanwhile, the blueberry-lavender lemonade had some really nice-looking blueberries in it—innovation! 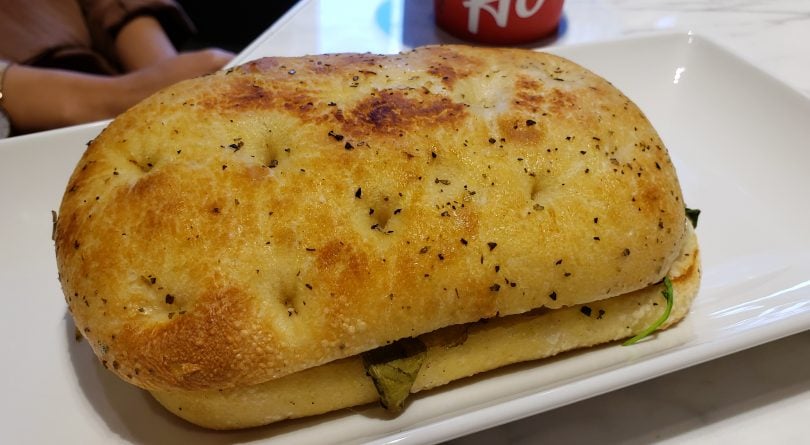 What I ate: Tuscan caprese sandwich

What I drank: double-double with oat milk

What I thought: I’ll admit that I have a sweet tooth. As the only loyal consumer of the Tim Hortons double-double in this group, I was hesitant about ‘innovation.’ Tim’s, being forward-thinking and all, has added almond and oat milk to their roster. I’d switch my double-double up by swapping regular milk with oat milk! And I have to admit, it was a nice touch; the nutty, bitter notes of oat balanced out the heap of sugar that I usually—willingly—devour. The caprese sandwich was a different story. The inside revealed a thin layer of slapped-together “bocconcini,” interspersed with tomato and wilting basil (as well as other greying, unrecognizable greens). Two giant slabs of “focaccia,” speckled with what was presumably dried rosemary and garlic, topped it all off. While it looked somewhat appealing, it was cold and tasteless, especially for its steep-for-Tim-Hortons $6.50 price tag. If Tim Hortons was looking to offer the flavour of a carefully crafted artisanal sandwich, this one missed the mark.