Maybe less anal-sex talk, next time? This, and other tips from Tabatha Southey after an Ontario PC leadership race marked by glitches and crises 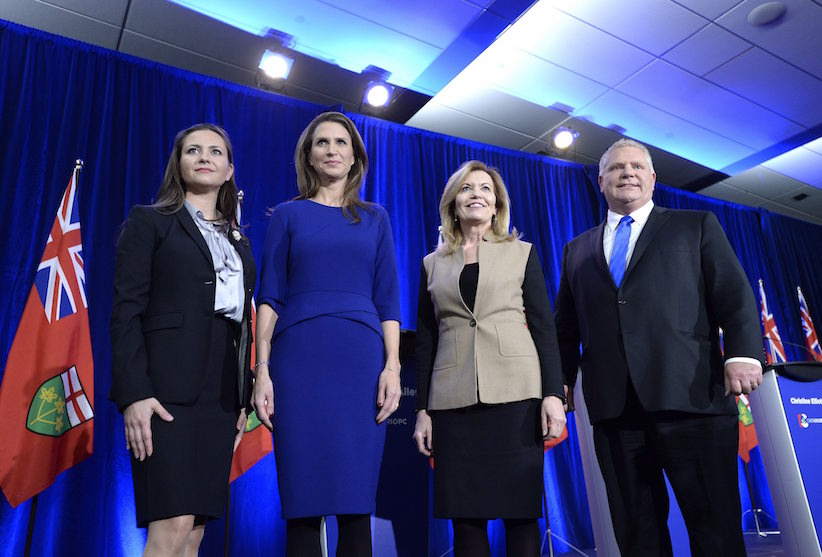 At this point, if things go according to plan—and hope springs eternal—the Ontario Progressive Conservatives will announce their new leader this Saturday afternoon. It has been, to put it lightly, a bumpy ride for the Ontario PCs since they lost their leader, Patrick Brown, then found him again, then pretended not to know him when they ran into him at their party very shortly after that.

Brown resigned as leader in mid-January after being accused of sexual misconduct by two women. Then, three weeks later—having only just been expelled from the party caucus—he burst back into the race to replace himself. Then Brown, who was for the most part welcomed back to the somewhat flaccid competition with folded arms, withdrew from the race on Feb. 26. Worst comeback tour ever.

When he departed the race, Brown offered up a four-page withdrawal statement, a document so bloated it appeared to have been written by the same person who wrote the Ontario PC Party membership rolls. These rolls, which we’ve now been told are right as rain, were apparently grossly inflated. It seems that 67,000 of the 200,000 members that Brown had insisted were a sign of his party’s good health never actually existed. This reassessment was a loss for the party, of course, but the Ontario Phantom Chimera Party has seen its numbers swell. Well, not seen, but you know what I mean.

It would be nice to think that the party could learn from a glitch-filled process, both necessitated and plagued by crises. It’s one thing to be forced to call a sudden leadership race in the lead-up to a provincial election because your previous leader has to go; it’s another to do that and then have a number of your members prevented from voting by organizational and technical issues that delayed their voter packages from being sent to them in the mail. These events have left the OPC looking like a desolate wasteland. “Coming soon from Ontario Politics: in the near future of this weekend, there is a struggle for dominance in the ruins of a once-great institution. Governed by strange archaic rules, passed down from the Old World, thwarted by decayed, half-understood technology, a fresh generation of conservative hopefuls fight to lead their party into a new era of not falling on their faces before the election this time.”

And yes, Hollywood, I am taking bids on my soon-to-be hit franchise launcher Mad Maximization of Our Membership Rolls: No, We Haven’t Moved Beyond Social Conservatism. I’m already working on the sequel, Fury About A Perfectly Sensible Sex Ed Curriculum, Do You Really Want To Go Down this Road?

But mostly, I hope that in the future, the Ontario PC Party might be able to find a way to select a new leader with a process that has more dignity, more credibility, is less chaotic, and better reflects on the party. I suggest a cockfight in a flaming clown car might be the way to go. But if my “incendiary avian automobile” strategy doesn’t appeal, here are a few other suggestions for how to improve the fortunes of the party.

A new kind of race. Since most of your current candidates—Christine Elliott, Doug Ford, Tanya Granic Allen, and Caroline Mulroney—are pretty well-heeled and socially and politically connected, may I suggest you just do what I know you wanted to do this whole time: settle this thing by regatta. At least if you did that, you’d be able to send your spokespeople out to say, “No, people are saying this thing is a ‘ship show!’ Also, we believe that everyday Ontarians are passionate about all things nautical and will be sending little captains hats to all our members just as soon as we figure out how ‘mail’ works.”

Online voting. One quick solution to the delays to the voting verification packages is to just open up online voting to everyone. “Boaty McBoatFace” may be an inanimate object unable to lead a major political party, or even speak, but on the bright side, this means it is unable to reopen the abortion debate.

Find. The. Monkey’s. Paw. Get rid of it. Check your emails. Look for subject lines like “Oops, I have brought doom upon us all, sorry about that,” or “God have mercy upon us, I’m so not putting this on my CV.” Evidence in the form of multiple news reports suggests that there’s a very good chance you’ll find the source of your misfortune in an email that opens with the words, “Hey team, just wanted to take a moment to apologize, I really thought the shrivelled ape appendage would brighten up the office. My bad.”

Check the books. Ontario PC interim leader Vic Fedeli claims the party’s “excessive spending that occurred in the past has been reined in,” but it’s still possible you missed something. Look for any unnecessary expenditures. Has the party recently invested in any pirate treasure hoards or property known to be visited be vengeful spirits? Check your inventory. Was that money really spent on pamphlets railing against a carbon tax, or could it have been diverted toward the purchase of eldritch tomes of dread knowledge man was not meant to know? Because that never ends well.

Vet your candidates. No need to dig too deeply, since that seems to be a problem for you—just check to make sure they were never part-owner of a restaurant called “Hooligans.”

If you’re trying to be populist, mean it. If you’re going to continue to try and brand yourself as the party of everyday Ontarians tired of all these elites, make sure to tell your candidates that no one with a $120,000 a year after-tax income and a $2.3 million home is an “average Ontarian.” Brown, when questioned—and not by the party—claimed that he spent about $90,000 of his annual $120,000 after-tax income on the $1.7-million mortgage on his his $2.3-million house and lives off the rest of his earnings. “That left me with $30,000 in post-mortgage, after-tax income,” he said, “which is, as it turns out, the same amount retained by the average Ontarian after taxes and mortgage/rent payments.” That, if true, doesn’t make you “one of the people,” Patrick—it makes you “one of the people who makes really bad financial choices.”

Who says there needs to be a race at all? Maybe just invite candidates to try and pull a sword from a stone. It just feels less dated.

Figure out a workable voting process for choosing a new leader and stick with it and your timeline. Stop asking for extensions on your extensions—the Ontario Progressive Conservatives are practically honorary freelance writers at this point.

Don’t run with scissors. I shouldn’t have to say this, but Doug Ford is currently in the running.