Someone must police the police

Michael Spratt: The SIU’s report on the police killing of Ejaz Choudry—shot in his home by police when he needed help—defies common sense 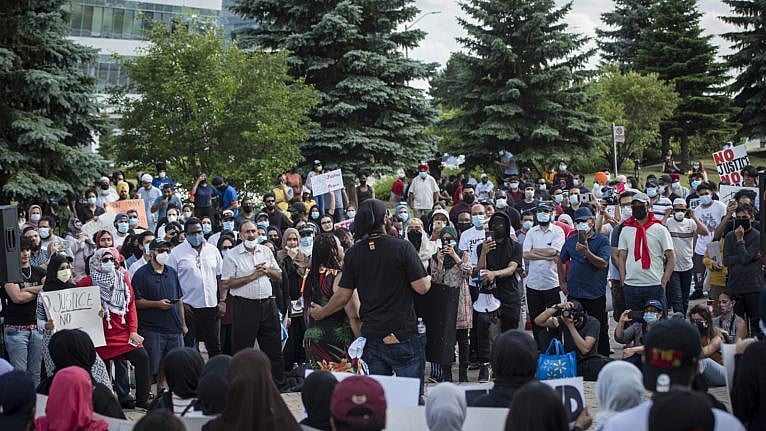 A rally for justice for Ejaz Choudry is held in Mississauga, Ont., on June 27, 2020 (Tijana Martin/CP)

Michael Spratt, certified by the Ontario Law Society as a criminal law specialist, is a partner at the Ottawa law firm Abergel Goldstein & Partners and co-host of the legal and political podcast The Docket.

Those who do not learn history are doomed to repeat it. And when it comes holding police accountable for killing the people they are supposed to protect, we have not learned a damn thing.

In April, the utterly predictable happened—Ontario’s Special Investigation Unit (SIU) cleared the Peel Regional Police of any potential criminal responsibility in the killing last year of 62-year-old Ejaz Choudry, who had been gunned down in his own home after his family called emergency services for a mental-health check.

Why were police equipped in militaristic tactical gear the primary responders in a mental-health call? Why did they burst into the Choudry’s small apartment where he posed a threat to no one but himself? How did he come to be shot with anti-riot rubber bullets? And was it really necessary to also shoot Choudry, a disabled man, twice in the chest?

A court will never have a chance to rule on the case. The evidence of the police officers will never be tested. And no one will ever be held accountable. Nothing will change. The SIU’s report on the police killing of Choudry can only be seen as yet another cover up.

Police accountability has been reduced to a simple flow chart. Step one: the police kill or seriously injure a member of the public. Step two: there is justifiable public outrage. Step three: police cling like grim death to their talking points. Step four: the SIU bends over backwards to excuse and justify police misconduct. Step five: nothing changes and eventually there is another killing.

The Choudry case is just the latest and one of the most egregious instances of the SIU exonerating unjustifiable police violence. On June 20, 2020, Choudry’s daughter called a non-emergency line to request medical assistance because her father, who suffered from schizophrenia, was not taking his medication and was acting confused. She also said that her father was in possession of a knife, but was not dangerous.

The police arrived with paramedics and attempted to speak to Choudry, who refused to come out of his apartment. He told the police to leave. Ultimately, at least 13 police officers surrounded the scene. They prevented Choudry’s family from talking to him (despite their pleas). They knew that Choudry was suffering a mental health crisis. They knew he was afraid of the police. They knew he could not speak English. And they knew he was in poor health.

Less than three hours later, despite the fact that Choudry was alone and there was no apparent urgency, heavily armed police officers stormed the apartment. A few seconds after kicking in the balcony door, police shot and killed Choudry.

The SIU concluded that the actions of the police were reasonable. If this was reasonable conduct, then what does it take for police to be held accountable? Let’s do what the SIU refused to do and use some common sense. A heavily armed SWAT team bursting into the apartment of a man experiencing a mental health crisis is a recipe for tragedy. Yelling for Choudry to drop the kitchen knife he was holding, in a language he may not have understood, is a useless performance designed to provide legal cover. Shooting Choudry in the chest was far from the only option.

The actions of the police officers were negligent. Police officers are bound by duty to protect life. Instead they were responsible for creating the perfect conditions for the loss of life. But the SIU report goes out of its way to cut the police as much slack as possible. The officer who shot and killed Choudry refused to co-operate with the investigation. But that did not stop the SIU from considering his state of mind—another officer heard him say that he had no choice but to shoot. Of course, using this hearsay statement means no one can directly challenge the killer on his justification.

The SIU found that the police narrative that Choudry posed a threat was “uncontradicted.” Which is only true because the police killed the only person in the apartment who could possibly contradict them. The SIU went out of its way to remind itself that police actions should not be judged against a standard of perfection. Yet it failed to really grapple with the common-sense proposition that asking that a frail man who needs medical assistance not be shot by a tactical team is hardly insisting on perfection.

The real problem is that it seems the SIU itself cannot conceive of any reasonable course of action that does not involve police killing the very people they are duty-bound to protect. It cannot conceive of using anything other than a militarized police force to help people in crisis. It is too blind to see that screaming commands in English at a man who cannot easily speak English, while pointing a gun at him, would not be a reasonable way to defuse a mental health crisis.

Someone must police the police, and it has become obvious that it can’t be the SIU. The SIU has shown time and time again they are not willing to challenge the status quo of police killing and hurting people who are in need of help. It has become clear that the SIU is part of the problem, and not a solution to our broken policing system.