Tabatha Southey: Seriously, you could not do worse than Day—I’d take a committed nudist over Wetsuit Guy 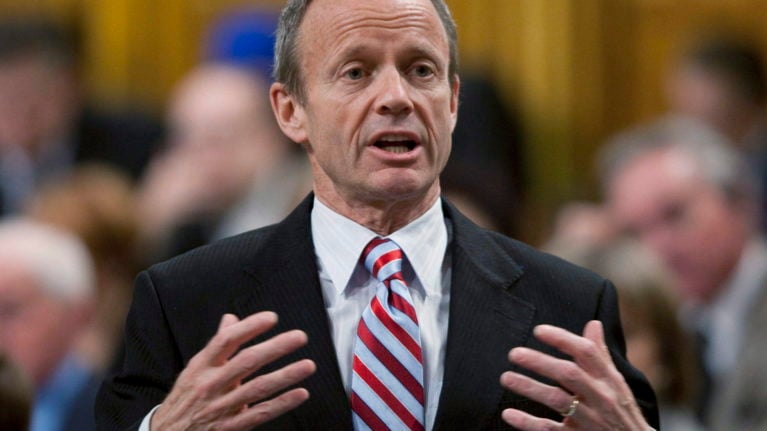 Stockwell Day rises during Question Period in the House of Commons on Parliament Hill in Ottawa, Dec. 14, 2010. (Adrian Wyld/CP)

Last week, former Canadian Alliance leader and Conservative MP Stockwell Day resigned from Telus’s board of directors and stepped down as strategic adviser to a law firm McMillan LLP after he said that there was no systemic racism in Canada.

Day’s remarks were made during a panel discussion about Black Lives Matter protests that was held on CBC’s Power & Politics. During that conversation Day said “Yes, there’s a few idiot racists hanging around but Canada is not a racist country and most Canadians are not racist. And our system, that always needs to be improved, is not systemically racist.” Indeed he went so far as to suggest that the racism black people and other visible minorities experience in this country is comparable to his own experiences of being bullied for wearing eyeglasses as a youngster.

“Should I have gone through school and been mocked because I had glasses and was called four-eyes and because of the occupation of my parents?” said Day. “Should I have been mocked for all that? No, of course not. But are Canadians largely and in majority racist? No, we are not.”

Perhaps Day is unaware, to use one tiny sapling in a forest of examples, of a study done in Toronto that showed that a disproportionate number of black students are streamed into applied programs over the academic options, and that black students are much more likely to be suspended than white students.

Surely that’s racism. Surely that’s systemic. Surely to live in this country and remain oblivious to the discrimnation based on race that surrounds us, indeed upon which this country was built, requires some industrial-strength wilful ignorance?

Day also stepped down from his role as a commentator on Power & Politics, and one can easily conclude that he did not jump from all these plum positions but was pushed. That would, after all, be a lot of jumping for one day, a really solid workout but I think the more pressing question here is not whether Day was turfed from this board or that platform but why he was in such lofty positions in the first place.

The case was ultimately settled, but not before taxpayers picked up the $792,000 tab, $60,000 of which went to Goddard. So, good for McMillan LLP for putting much daylight between themselves and Day. Good for them for stating that they “believe that systemic racism is real and that it can only be addressed when each of us—as individuals and organizations—commits to meaningful change,” but what possess a law firm to bring a man on board as a strategic advisor after he has proven himself to be not just anti-lawyer on, at least, an individual basis but anti-law?

That everyone is entitled to a defence is kind of a key tenet of our legal system and a lawyer may use tenuous, and in this particular case unsuccessful arguments, to defend their client. If you wouldn’t seek the legal wisdom of a man who said that any defence attorney representing someone accused of bank robbery, and using every applicable legal argument to do so, can’t be trusted near a TD, why seek it from Day?

I am not going to speculate on what Day brought to the McMillan LLP table, but it does feel a bit like a vegetarian restaurant bringing in a celebrity chef best known for pushing The All Veal (With Extra Cruelty) Diet to consult on their menu.

As for Telus, I’m not familiar with the minutiae of running a telecommunications company in Canada, but does the CRTC require every telecom to have at least one creationist with no industry experience to be on call at all times? Even assuming he was brought on board more for who he knows, than for what he knows, if I were picking a well-connected former politician to promote my interests and brand, I’d probably stick to one who didn’t famously try to promote his own brand by arriving at a press conference on a Jet Ski, wearing a wetsuit, the world’s most inherently goofy article of clothing.

Seriously, you could not do worse—I’d take a committed nudist over Wetsuit Guy.

What possessed the CBC to showcase Day on the regular? There are much more articulate and compelling conservative voices out there. There are conservatives who did not call being gay a “lifestyle choice that doesn’t deserve this kind of attention” and who did not float using the notwithstanding clause, to block same-sex marriage, or advocate using it to ensure that gay and lesbian Canadians did not receive protection under Alberta’s human rights code. Day did just that, in what looks to be a long campaign against LGBTQ Canadians, one that involved grouping their marital unions in with pedophilia and multiple flavours of incest, and our national broadcaster rewarded him for it.

Could it all be because our institutions, legal, corporate and media, still instinctively view middle- aged straight cis white men who at one point held some power as inherently important voices? Could it be we still consider these men neutral and therefore ideal arbiters of, among other things, whether Canada is racist or not?

Yes. It is exactly that.

Please, CBC, there is no law, nor even a journalistic principle, that requires you to showcase the opinions of people who have no expertise on, or experience of, the subject at hand and who are fairly unremarkable apart from their history of trying to make the world a worse place for LGBTQ Canadians. There is no CanDickhead-Con, CBC.

Now let this be the end of Days.