Stress, anxiety, hopelessness—during the coronavirus pandemic, who feels it the most?

Frank Graves and Michael Valpy: When it comes to who is feeling hopeless during COVID-19, it's 'decimal-point dust' for the well-off and despair for the rest 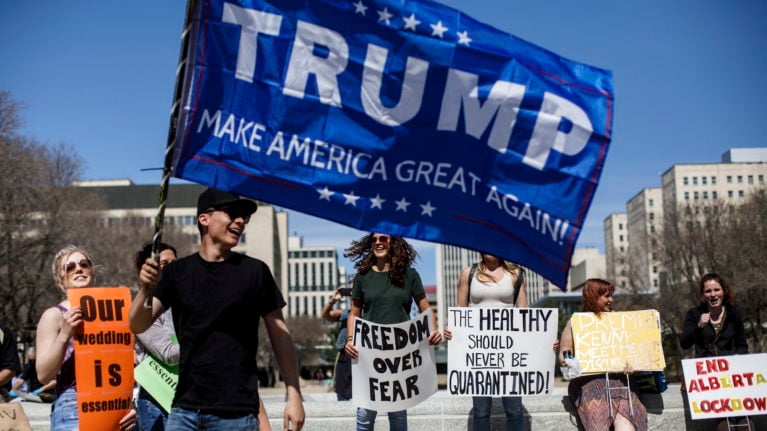 A group gathers to protest against social isolation rules of the COVID-19 pandemic, in Edmonton, Alta., on Apr. 29, 2020. (Jason Franson/CP)

It’s a great Canadian sport to spot the cultural differences that exist on the two sides of the 49th parallel, particularly when many are exaggerated or non-existent, utterly refuting our convictions that north of the border, we live in a more caring, just and sensible society.

Take the anti-lockdown, anti-distancing demonstrations that the U.S. media reported with considerable noise in at least 18 states over the past couple of weeks. Almost all of them attracted a few hundred people. What distinguished them was the amount of media attention they received—lots, nationally and internationally—and the encouragement they received from President Donald Trump, the American head of state and head of government. “The governor of Michigan should give a little, and put out the fire,” the president tweeted about the demonstrators rushing the state capitol in Lansing. “These are very good people, but they are angry.”

Now have look at this side of the border.

MORE: ‘I saw fleeting moments no one remembers’: One ER doctor’s photos from the coronavirus frontlines

A demonstration by some 100 protesters outside the Ontario Legislature demanding an end to the public health lockdown was met with a grumpy slap from the province’s head of government, Premier Doug Ford, who called them “irresponsible, reckless, selfish” and “yahoos.” They got a couple of buried paragraphs in local media articles and haven’t been heard from since.

However, where the focus should be is not on the noisy handfuls but on the fact that the pandemic we’re going through is far from equal-opportunity. There’s unequal punishment inflicted on the lower, middle and working classes, and on the other hand, the pandemic scatters just a few speed bumps in the path of economic immunity for those who can work at home.

While Statistics Canada reported in mid-April that more than one million jobs were lost as social distancing and mandated shutdowns took force, a further two million saw their hours of work fall dramatically, and many hundreds of thousands more saw themselves designated as “essential workers.” These are workers at the very bottom of the income scale, who are forced to keep working their public-facing jobs, all indicators of what American sociologist Richard Sennett calls “the hidden injuries of class.”

MORE: Has coronavirus made us part with our online privacy?

The pandemic-caused employment shift among managers and those working in professional, scientific, or technical jobs has been “decimal-point dust,” says Canadian labour economist Miles Corak, “but 300,000 people working in accommodation and food services lost work, a fall that wiped out 20 years of growth.”

EKOS has found that, while everyone would prefer to work from home for health safety, the university-educated are indeed working at home, but the less educated and the less affluent are not—because they have no choice. And those in the lower socio-economic strata are less than half as likely to rate their health as excellent as those in upper income groups.

This is the face of job inequality that has been growing wider in Canada for decades, Corak says. It’s not just a passing economic discomfort. And without a dramatic shift in public policy, it means an insecure standard of living and lower prosperity that will last into the next generation.

EKOS found that the least educated, the least skilled, people of colour and immigrants, are twice as likely to have lost jobs as white Canadians, and much more likely to say they are having trouble finding a replacement.

And when it comes to increasing stress, exactly the same surveys done by the Pew Research Centre in the U.S. and EKOS Research Associates in Canada on the pandemic-related emotional states of Americans and Canadians produce exactly the same results: lockdowns and compliance with public health guidelines are overwhelmingly supported by both societies but they are on the very edge of being rejected.

The link between well-being and socio-economic status—particularly income—is dramatic. EKOS says Canadians’ outlook on the economy is the worst seen in any poll it has ever conducted. More than two-thirds of the adult population think the country is in either a severe recession or depression and the further the pandemic’s conclusion recedes in Canadians’ minds, the greater the sense of hopelessness.

Canadians are close to consensus now (as are Americans) on compliance with health safety practices, but the research indicates that in 60 days or less, a sizable portion of Canadians will be likely to be giving up on compliance and entering the despair zone. Economic distress and fears about health impacts are producing pervasive and dangerous levels of stress and psychological damage. The huge emerging issue, in fact, may be the state of Canadians’ mental health.

Stress and anxiety are highest among women, in households with children, and amongst those under 50. Economic despair and hopelessness is highest among working-class men, a phenomenon acutely present in the U.S., as economists Anne Case and Angus Deaton have shown in their book, Deaths of Despair and the Future of Capitalism, a story of increasing mid-life deaths in America from liver disease due to drinking, drug use and suicide, as working-class jobs move off-shore and unions are eviscerated. But this sentiment is also present in Canada.

Half of all Canadians are experiencing some form of depression and half are saying they’re feeling hopeless. The inequality is pervasive—decimal-point dust for the well-off and despair for the rest.

Income inequality, says Corak, is easier to ignore in a full-employment economy. “The great revealer has arrived in the form of a virus, its economic fallout showing almost perfectly the divides between those who are vulnerable and those who are not,” he adds.

Inequality has been robbing many Canadians of security, prosperity and dignity for decades, particularly those Canadians being lauded in the time of pandemic as “essential workers,” like truck drivers, personal care workers, grocery store clerks and janitors. “It is nice for premiers and prime ministers to thank truck drivers and grocery store clerks for their essential work,” Corak explains. “But it will be hypocrisy of the highest order for our governments to only hope to start up again where we left off.”