Tabatha Southey: C'mon James O'Keefe, did you never see All The President's Men? 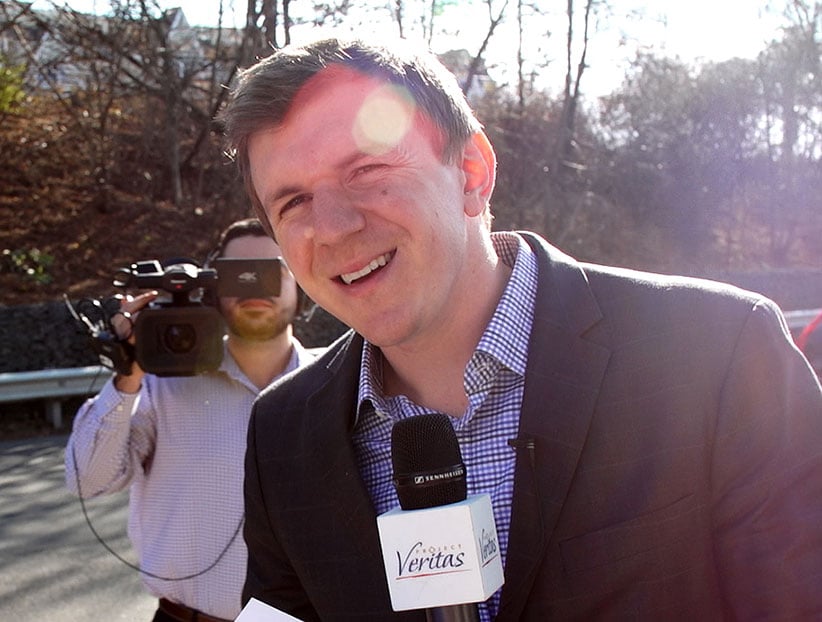 James O’Keefe, the founder of Project Veritas, dodges questions about a woman who falsely claimed in interviews with The Washington Post to have been sexually assaulted as a teenager by U.S. Senate candidate Roy Moore. (Dalton Bennett/The Washington/Getty Images)

The Washington Post broke a story this week that gave many people a much-needed reminder of how the sausage is made. The less-than-organic ingredients for this news-meat product were delivered straight to their doorstep by Project Veritas and its founder James O’Keefe. Mostly it consisted of 100% pure ground O’Keefe.

Some of you, when you think of O’Keefe, may have the vague notion that you remember him from the 1970s. That’s because he first forced himself into the public eye eight years ago dressed like an extra from The Rockford Files. Sporting huge sunglasses and a long fur coat over a pink shirt and carrying a small cane—yes, a small cane—O’Keefe did the media rounds promoting videos he recorded and heavily edited to discredit The Association of Community Organizations for Reform Now. ACORN, as it was better known, worked in low-income neighbourhoods on issues of safety, affordable housing and healthcare as well as voter registration. Until O’Keefe put a stop to that, earning conservative acclaim. 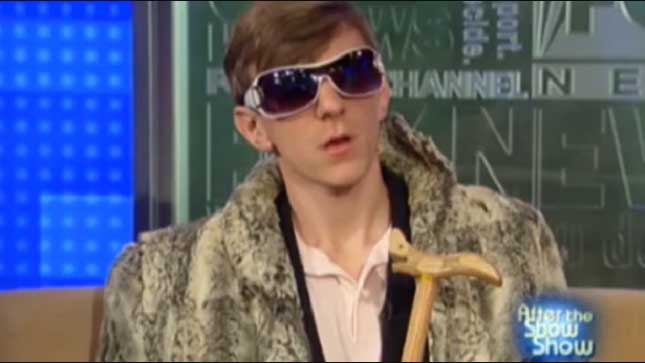 The be-furred O’Keefe presented a scenario in which ACORN employees at six offices had counselled him on how to skirt laws pertaining to human smuggling, tax evasion and child prostitution, even though he was clearly a time-travelling, colour blind pimp. A woman posing as a sex worker accompanied him on these fishing trips.

O’Keefe wore his “street” outfit to promote the videos, although it soon came out that despite editing in a segment showing him in costume supposedly on his way to ACORN offices, he’d dressed conservatively during the actual meetings. This sartorial shadiness was far from the only misleading aspect of the videos, which had been heavily edited, non-chronologically, and in fact several ACORN offices had immediately reported the couple to the police. Ultimately, an investigation determined that while poor management had led to low-level employees badly mishandling the bizarre situation O’Keefe put them in, ACORN had broken no laws.

Still, funding for ACORN dried up, and after serving low-income communities for three decades, the organization closed its doors in 2010. Funding for O’Keefe, on the other hand, flowed ever more freely, and that same year he launched Project Veritas, a tax-exempt charitable organization that raised US$4.8 million in donations in 2016. Recent filings reveal that this enterprise now earns O’Keefe US$300,000 annually—merely, it seems, for popping back into the news from time to time on glacially slow days.

At the highest point of his post-ACORN career, O’Keefe released another deceptively edited video, just before Congress was set to vote on continued funding for National Public Radio. In the video, two of his operatives, claiming to represent a Muslim Brotherhood-associated charity, attempted, and failed, to donate $5 million to NPR. There was more misleadingly edited tape concerning whether or not NPR needed funding, and this stunt led to the resignation of then-NPR CEO Vivian Schiller and very little else. NPR endures, but then so does Project Veritas.

O’Keefe is like one of those directors who had one box-office hit, then managed to put out a couple of marginally attention-grabbing productions, and now nobody is entirely sure why people—ThinkProgress reports that the Trump Foundation donated US$20,000 to Project Veritas in 2015—keep giving him money. We’re looking at the M. Night Shyamalan of dirty political operatives and this week’s release should, by rights, have been a career ender.

On Monday, the Washington Post revealed that they’d been approached by a woman named Jaime Phillips who spun a long and “dramatic” story about how back in 1992, when she was 15, she had a sexual relationship with now-Republican Alabama Senate candidate Roy Moore. Over the course of interviews that took place over a span of two weeks, Phillips claimed she’d been talked into having an abortion by Moore after he impregnated her.

In recent weeks, many women have accused Moore of sexual misconduct. Several of them have alleged they were young, indeed underage girls at the time. These women include Leigh Corfman, who says Moore first targeted her outside her own custody hearing and later, she says, drove her to his house before stripping down to his tighty-whities, touching her sexually and trying to compel her to do the same to him. She was 14 and he was 32.

Beverly Young Nelson recounts how, when she was 16, Roy Moore offered her a lift home after she finished her shift at a local restaurant. She accepted. He was, after all, the district attorney, and a regular, but instead of seeing her safely home, she alleges, Moore parked behind the restaurant and assaulted her. “He began squeezing my neck, attempting to force my head onto his crotch. I continued to struggle,” she recounted. “I thought that he was going to rape me.” When she managed to stop him, she says he told her not to tell anyone what had happened because “I am the district attorney of Etowah County and if you tell anyone about this, no one will ever believe you.”

Multiple sources in the town, including several who were in law enforcement at the time, say that, as has apparently been long-rumoured in Gadsden, Alabama, Moore was banned from the local mall for pestering many young women there.

Into this developing story steps Jamie Phillips, spinning her not-implausible tale, one that the Post questioned, and here’s where we get to see how the news-sausage gets made. The journalists working on the story, including Stephanie McCrummen, one of the two people who had written the initial story about Corfman, noticed inconsistencies in Phillips’s account. They caught these things not just because they were glaringly obvious—on a recently launched GoFundMe page, publicly visible, one Jamie Phillips announced: “I’ve accepted a job to work in the conservative media movement to combat the lies and deceit of the liberal MSM”—but because that’s what good journalists are trained to do. Good journalists are mostly obsessive and relentless about fact-checking and corroboration and I, as an opinion writer, assure you that consequently they are not much fun at parties.

Do not offer them “champagne” from the Napa Valley, unless you’re prepared to stand there awkwardly, holding a bottle, while they check with legal before insisting you retract your offer and pour them “sparkling wine” instead.

Many people seem to assume that an “anonymous source” tips off a journalist like a TV-teenager slipping a note into a crush’s locker. As in, “I like you, you have nice hair, also, here are some papers I lifted from the Pentagon.” Then said journalist gleefully runs off and prints the story-gift, source unseen.

Largely, folks can be forgiven for this misunderstanding—unless of course they work in the “Taking Down the MSM” Industry, as does O’Keefe, in which case one has to ask, “Eight years, James, how in God’s name do you tilt at windmills that long without at least picking up some basic molinology?”

As Sun Tzu famously wrote, “If you know the enemy and know yourself, you need not fear the result of a hundred battles.” Less remembered is his corollary, “If you know just about nothing about anything and assume everyone else is at least as ignorant and venal as you, you’re probably going to end up making yourself look like a complete dickhead in the pages of the Washington Post.”

That’s certainly what happened to O’Keefe this week. The Post journalists investigating her claim sensed Phillips was asking leading questions about what her story might mean for Moore’s election chances. They began to suspect she was taping their conversations. She did not seem to work where she claimed to work. Nothing corroborated her story. She was, as the table-turning-tapes they released this week reveal, a terrible liar. She seems unable perhaps to grasp that she’s been busted, even when McCrummen produced a printout of her GoFundMe page and asked for an explanation. Someone with her daughter’s name had donated to the cause. Still, she stays, like this might all still work out.

Phillips had been seen hanging out in a local bar, trying to ingratiate herself with journalists before these amateur theatrics began, and this past Monday she was witnessed walking into the New York offices of Project Veritas.

C’mon Veritas, how hard would it have been to find an out-of-work actor in Manhattan, then maybe run a quick Google search to see if they’d registered and posted on “RightwingGrifter.com” or anything else that might redflag your “source” to a journalist considering laying their credibility and career on the line for a story?

A motive for the attempted sting isn’t difficult to discern. If the Washington Post, the paper that broke the Corfman story, could be enticed to run another story alleging sexual misconduct on Moore’s part, and that story was revealed to be false—possibly with bonus material of conniving reporters boasting that their story would surely bring about Moore’s downfall, like Bond villains explaining their death-ray—other allegations against Moore would be much easier to dismiss.

As would a lot of other sexual assault allegations, for a very long time.

Project Veritas, an organization that professes to have been founded to “Investigate and expose corruption, dishonesty, self-dealing, waste, fraud, and other misconduct,” appears to have laboured to discredit victims of sexual assault in order to help elect an alleged child molester to high office.

Better in the Senate than cruising the Orange Julius is the best defence that can be made of this scheme, and it’s a terrible defence. Although many Republicans have tried worse. Alabama State Auditor Jim Zeigler sagely pointed that the Virgin Mary was also a young teenager, perhaps missing much of the nuance of that story. Also, Jesus Wept.

Mercifully, this particular Project Veritas plan never reached the “cosplay on the chat show” stage because it was as incompetent in its execution as it was immoral in its conception. It’s easy to imagine this whole saga beginning with a young James O’Keefe, filled with dreams of being a schoolyard bully, but not quite grasping how the whole process is supposed to work. I see him standing in the yard, punching himself in the face and shouting “stop hitting yourself” over and over again.

Come on, O’Keefe and company, it’s the Washington Post. You don’t have to go to journalism school to see how things generally work around there; you don’t even have to read the paper. There’s a movie, with Robert Redford. It’s pretty gripping and it’s mostly about two guys on the phone, double, triple checking.